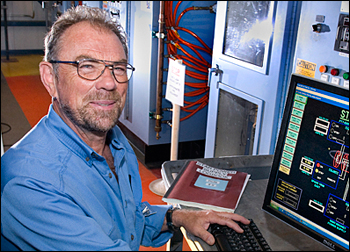 Frank Dusek of the Collider-Accelerator Department spends his time at BNL working on unusually large power supplies – the type that power BNL's NASA Space Radiation Laboratory and the STAR and PHENX detectors at RHIC. But he feels equally powerful to be able to make a difference in someone’s life by donating blood.

“I’ve been donating blood for over 30 years,” said Dusek. “I have also donated platelets and bone marrow. I consider it a simple gesture that makes a big difference.”

Dusek is a member of the BERA Board and serves on the committee that arranges raffles for employees who donate blood. “Although I believe the blood drives held at the Lab are quite successful, I think offering a small incentive, like having your name put in to a hat for a raffle, can help. We typically raffle off free BERA merchandise or a BERA-organized trip for the winners.”

In addition to his participation on the BERA Board, Dusek is a motorcycle enthusiast and an active member of the Lab’s motorcycle club, the Cycletrons.

Dusek said that having his blood pressure checked during routine blood donation also helps him track his own health. And, despite his busy schedule, he always finds time to donate blood. “Besides the difference I think I can make in someone’s life, I also enjoy those free jellybeans,” he said.