9/11 – National Day of Service and Remembrance 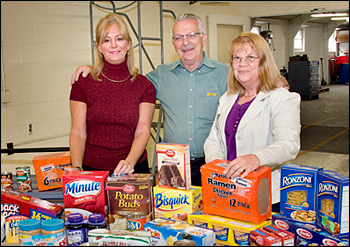 (From left) Brookhaven Lab's Linda Rundlett, Jerry Quigley, and Linda Greves look over the large selection of donated food in the BNL warehouse that will be delivered to a local food pantry.

President Barack Obama authorized 9/11 as a National Day of Service and Remembrance when he signed the Edward M. Kennedy Serve America Act into law in April 2009. Numerous nonprofit organizations supported the effort, which honors those who had died during the terrorist attacks in 2001 by encouraging Americans to volunteer in any way they choose, from rebuilding cities after a disaster to helping students achieve in school, aiding homebound seniors, or feeding the hungry.

Brookhaven Lab, together with the American Physical Society (APS) in Ridge, Long Island, have been feeding those in need in the local community since 1988, when volunteers from both institutions began collecting food for the Town of Brookhaven’s Interface Program. During the last year, 20,860 pounds of food have been donated to local charities, thanks to the generosity of the BNL-APS community.

“Food pantries all over Long Island are in distress,” said Linda Rundlett of the Lab’s Guest, User, Visitor Center, who is co-chair of the BNL food drive with Linda Greves, Safety & Health Services Division. “Over the last year, the requests for food have increased by at least 20 to 30 percent. We encourage the BNL community to continue to give whatever they can to help those in need, not only on this National Day of Service, but all year long.”

Food bins are located in many buildings throughout the BNL site, including the lobby of Bldg. 400, and the Post Office, Bldg. 179. About 30 BNL volunteers pick up the donations once per month and take them to a center in Bldg. 494 to await transport to a local food pantry.

Besides non-perishable food items, checks are welcome as donations to the food drive; needed items for local food pantries will be purchased with them. Checks should be made out to “BNL Food Drive,” and sent to either Rundlett, Bldg. 400A, or Greves, Bldg. 120.