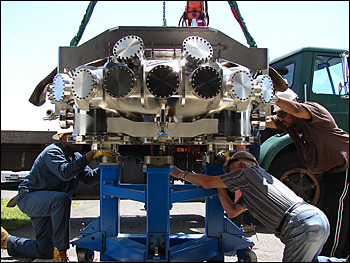 Brookhaven workers guiding the saucer-like vacuum chamber in for a precision landing. Photo by Bob Scheuerer.

New photographic evidence shows employees readying what looks like a flying saucer for use at the National Synchrotron Light Source (NSLS).

Although the device looks extraterrestrial in origin, it is actually a vacuum chamber custom made for Brookhaven by MDC Vacuum Products, a manufacturer based in Hayward, California. The equipment — nicknamed the “Saucer” or “UFO” — arrived at the Lab during the summer, and Brookhaven workers are now busy fabricating and assembling the internal components.

Like other synchrotrons, the NSLS uses magnets to accelerate electrons to extremely high speeds in a circular pattern. These electrons then emit electromagnetic radiation in the form of synchrotron light, which is used to examine tiny atomic and molecular structures.

The electron beam that produces synchrotron light must travel in a vacuum. Otherwise, gas particles will scatter the electrons on impact, causing the beam to lose energy or disperse altogether. In addition, each of the 65 beamlines at the NSLS also must be kept under a vacuum as empty as the dark void of outer space that an alien spacecraft would have to traverse. That’s the responsibility of the “UFO,” which, once complete, will become the new end station for NSLS beamline X13A.

The device has to fulfill some strict requirements before it can take on this specialized role. Cecilia Sanchez-Hanke, an NSLS physicist and spokesperson for beamline X13A, said that not only must the chamber maintain a vacuum, it has to “allow, at the same time, free movement of many of the different components that we still need to bring inside.”

Scientists now use beamline X13A for research of the characterization of magnetic materials. The chamber was designed to cover present requirements and anticipate the needs of future research, according to Sanchez-Hanke. This is because the device will likely be transferred for use at NSLS-II, now under construction.

Assembly of the new end station should be completed by late 2010, according to Bob Scheuerer, senior technical supervisor at NSLS.

The “Saucer” accompanies some extensive, Brookhaven-centered UFO folklore that has developed during the last two decades. In April, the hosts of “UFO Hunters,” a weekly series on The History Channel, visited the Lab and interviewed scientists at the Relativistic Heavy Ion Collider (RHIC). That story later appeared in symmetry magazine. The cover illustration for that issue was created just after the “Saucer’s” arrival on site. Coincidence? Perhaps.