The following is an excerpt of a story originally published by the U.S. Department of Energy’s (DOE) Atmospheric Radiation Measurement (ARM) User Facility. Michael P. Jensen, a meteorologist at DOE’s Brookhaven National Laboratory, is the lead scientist for the study. For more information about Brookhaven’s role or to speak with a Brookhaven Lab scientist, contact Karen McNulty Walsh, (631) 344-8350, kmcnulty@bnl.gov. 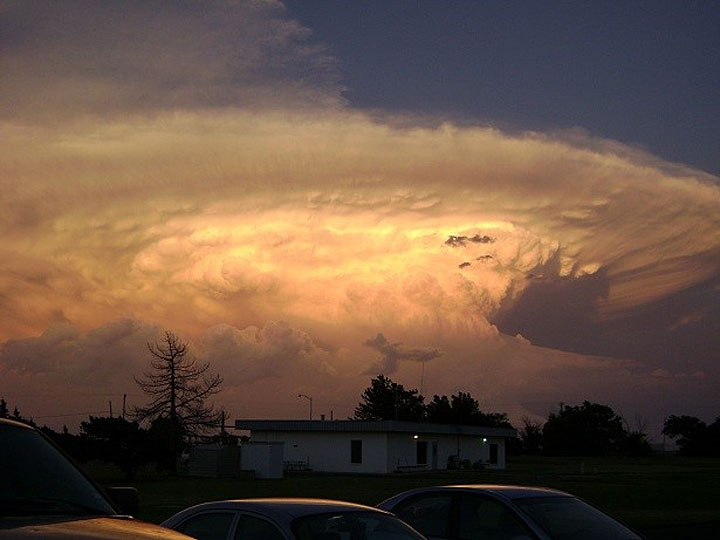 Deep convective clouds will be the focus of an upcoming ARM field campaign in Texas. Credit: Courtesy of the National Weather Service

Deep convective clouds—the kind that often pack lightning and pour rain—occur nearly everywhere in the world. They are an important feature of the atmosphere, especially in storm systems that dominate the tropics and midlatitudes.

To poets, these harbingers of storms are a durable inspiration. German writer Johann Wolfgang von Goethe saw them as “the mad thunder-cloud, (where) fierce legions clash.”

Outside the realm of verse, scientists are still struggling to know what goes on inside convective clouds—exactly how their “fierce legions” of energy and mass combine and interact. 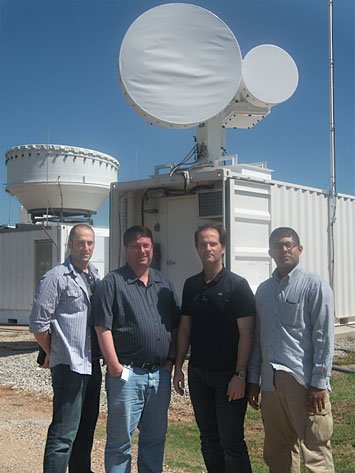 In 2011, Michael P. Jensen of Brookhaven Lab, second from left, was principal investigator for MC3E, one of the ARM field campaigns that informed the TRACER science plan. With Jensen, from left, are Scott Giangrande (Brookhaven) and Pavlos Kollias (then at McGill, but now a joint appointee of Stony Brook University and Brookhaven Lab), who are now TRACER co-investigators, and Nitin Bharadwaj (Pacific Northwest National Laboratory), principal engineer for ARM's radar group. Credit: Courtesy of the U.S. Department of Energy Atmospheric Radiation Measurement (ARM) user facility.

In particular, many researchers are vexed by how aerosols influence the physics of such clouds, including the precipitation processes and vertical velocities that affect rates of cloud growth, ice formation, and lightning occurrence.

Aerosols are solid or liquid particles dispersed into the atmosphere by natural sources (such as tree cover) and artificial ones (such as cars and coal plants). Under the right conditions, aerosols help clouds form, and in this way play an important part in weather and climate patterns.

Finding out what happens inside deep convective clouds is the aim of a new field campaign for which Jensen is principal investigator.

With ARM mobile instruments in place, TRACER is scheduled to run from April 2021 to April 2022 in and around Houston, Texas.

“We want to focus on the convective core,” says Jensen. “We need very detailed measurements of the convective updraft—including the vertical winds and cloud microphysics—and how they evolve over the cloud life cycle, and under varying atmospheric conditions.”

To date, he adds, the microphysical processes within convective clouds are represented only in a limited way in the parameterizations used in models of both weather and global climate. 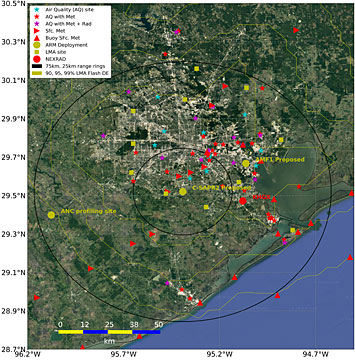 A map from the TRACER science plan shows the proposed approximate deployment areas for the first ARM Mobile Facility (AMF1) near the La Porte, Texas, airport; the CSAPR2 near Manvel-Croix, Texas, with 25-kilometer and 75-kilometer range rings; and an ancillary ARM site.

Jiwen Fan, an atmospheric scientist at Pacific Northwest National Laboratory (PNNL) in Richland, Washington, argued for the rain-making power of fine aerosols as lead author of a 2018 paper in the journal Science. Other scientists doubt a connection.

Meanwhile, present climate and weather models overestimate how strong these updrafts are within convective clouds. It’s one of the model biases—offsets from observations—that TRACER is designed to correct.

“In the end,” says Jensen, “that’s what we’re trying to do. We’re trying to improve the representation of these clouds in climate models.”

Read the original story and linked pages for more details about the TRACER campaign.