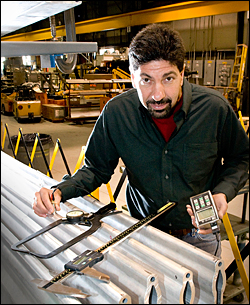 Jim Stolfi shows off his tools on the floor of the Superconducting Magnet Division.

Jim Stolfi first came to BNL in the late 1990s as a mechanical inspector in the Magnet Division during the assembly of the Relativistic Heavy Ion Collider (RHIC). Now, he has returned to aid in the construction and operation of Brookhaven’s newest premier facility, the National Synchrotron Light Source II (NSLS-II).

Stolfi was born in Rome, Italy, as his father’s work building power plants for GE took him across many countries. He grew up in Center Moriches, and has lived there ever since. When Stolfi’s previous employer, Northrop Grumman, relocated off Long Island, he began seeking employment in technical and manufacturing fields.

“I first learned of the high-tech positions that the Laboratory had to offer when I was attending night college,” Stolfi said. “Many of the students in my technical class were BNL employees and spoke of the interesting projects and great work atmosphere.”

Stolfi joined Brookhaven in April 1996. He was responsible for the receipt, inspection, and inventory control of detailed parts that would eventually find their way into magnets both at RHIC and at the Large Hadron Collider in Switzerland.

Once Stolfi’s first position at Brookhaven ended, he helped manufacture specialized x-ray and computed axial tomography (CAT) scan hardware. He has since returned to the Lab as a technical specialist working on vacuum components for NSLS-II. Stolfi intends to continue at Brookhaven for the remainder of his career, and will stay on as a vacuum support technician once NSLS-II construction is complete.

“I returned to Brookhaven Lab because I wanted to re-join the highly skilled team of scientists, engineers, and technicians that will be designing and building the NSLS-II machine,” he said.

When asked what he liked most about working at Brookhaven, Stolfi answered that it was being part of the interesting work the Lab performs, which continues to challenge his skills and encourages teamwork. He was especially excited to take part in the groundbreaking ceremony for NSLS-II with the old BNL team.

In his spare time, Stolfi applies his expert skills to repairing old automobiles; he now has a fully restored ’79 Camaro and ’72 Corvette. He attends local car shows and enjoys “taking rides out east.”