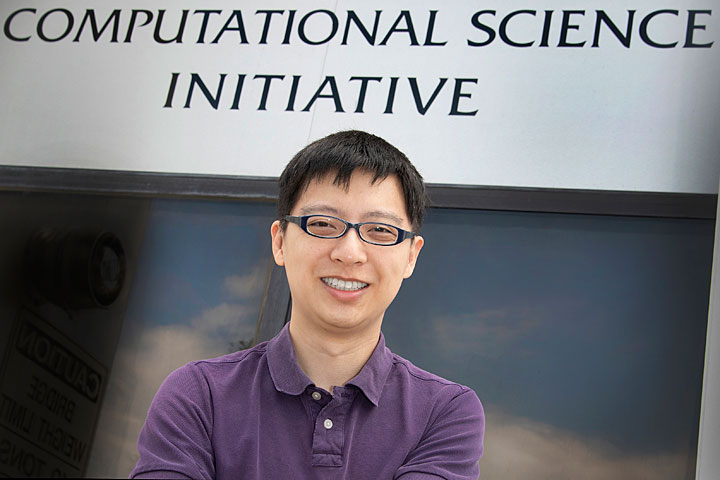 Quantum optics, where light and matter interactions are examined at the microscopic level, has earned Nobel prizes—including three awarded since 2001—for some of science’s biggest names. However, even in this mature field, some interesting physics remains largely unexplored. An international team of scientists from Technische Universität Wien (Austria), Duke University, Università degli Studi di Palermo and Istituto Nanoscienze CNR (Italy), and the U.S. Department of Energy’s Brookhaven National Laboratory has unveiled a new approach for photon trapping that can localize and store one photon, providing another option for unraveling complicated physics and manipulating the quantum state of single photons. Their work was recently published in Physical Review Letters.

Yao-Lung (Leo) Fang, an assistant computational scientist with the Quantum Computing Group in Brookhaven’s Computational Science Initiative and a co-author of the paper, explained that a particle occupying a stable bound state is confined in space, such as an electron orbiting a hydrogen atom. However, bound states are typically disconnected from the continuous energy spectrum—i.e., out of the continuum—of the system. This makes bound states in the continuum (BIC) an interesting yet difficult physical phenomenon to study. In fact, Fang noted BIC is an active research topic across many scientific and engineering fields.

In some atom waveguide setups (a testbed where a one-dimensional optical channel is strongly coupled to atoms) a BIC consisting of collective excitations of light and matter can exist. Armed with this knowledge, Fang and his colleagues determined a new approach to excite the BIC, which previously was thought to be possible only with spontaneous photon emission. Unlike conventional approaches that require controlling light propagating in a medium, their excitation method provided a novel way of trapping single photons without slowing down the light.

“When Francesco [Ciccarello, co-author of the paper] first brought up this idea of exciting the BIC to us, I was a bit skeptical,” Fang said. “But, after we sat down and analyzed it thoroughly, it turns out he was right. It really works!”

Exciting the BIC localized between two distant qubits coupled to a one-dimensional waveguide: schematic for one system that permits the existence of BIC when the qubits are separated by multiple half-resonant wavelengths.

The team considered the BIC in two testbeds, including an open waveguide coupled to a pair of distant atoms. Exciting the BIC also required two important ingredients: a multi-photon wave packet and a substantial time delay (round-trip time for photons to propagate between two distant objects). Fang and his colleagues found that by properly engineering the time delay and wave parameters, they could send in two photons and trap one with more than 80-percent probability. With improved parameters, they expect that, in principle, a perfect trapping is possible. The result provides an alternative example for investigating quantum dynamics in a nonlinear system. In turn, this can inform broad areas of research involving quantum many-body physics, where systems are composed of numerous quantum mechanically interacting particles.

“We had to have finite time delay to maximize the trap,” Fang said. “The value is that the method can benefit quantum memories, networks, and computing. For example, quantum computers need to store a photon and retrieve it when needed. Because photons move at the speed of light and cannot stop, we need to slow them down so that they can be stored. Now, we have a new, verifiable mechanism to store a photon.”

Because photons move at the speed of light and cannot stop, we need to slow them down so that they can be stored. Now, we have a new, verifiable mechanism to store a photon.

Fang acknowledged that the team’s photon scattering work also differs because of its influence by non-Markovian dynamics, which can be difficult to address because of how previous states influence the subsequent states in a system.

“There is general interest in non-Markovian physics, from all-optical systems, including microwaves and lasers, AMO [atomic, molecular, and optical] physics to optomechanics, and a typical signature is the deviation from pure exponential decay,” he explained. “There are great technical difficulties in studying many-body effects with time delay. In non-Markovian dynamics with delay effects, our study presents a model system with similar physics that can be solved numerically to let physicists infer and examine what happens in these systems.”

Ultimately, Fang noted, there is high potential to take advantage of the BIC, such as for creating a two-qubit entangling gate for quantum computers or even envisioning long-distance communication over quantum networks.

“By exciting the BIC, a finite entanglement can be created between two distant nodes in a quantum network,” he said. “There are many ways the method could provide impactful schemes for other work and in emerging science areas.”

This research was supported by DOE’s Office of Science and the Fulbright Research Scholar Program. Work at Brookhaven National Laboratory was supported in part by the Laboratory Directed Research and Development program and Empire State Development. Some computational work was completed at the Center for Functional Nanomaterials, a DOE Nanoscale Science Research Center located at Brookhaven Lab, and the Scientific Data and Computing Center, part of Brookhaven’s Computational Science Initiative. Additional support was provided by the Austrian Science Fund.