The National Synchrotron Light Source II (NSLS-II) will conduct high-precision experiments that require an extremely steady structure. A comprehensive program of soil exploration and excavation was necessary to give the facility the stable foundation it needs. 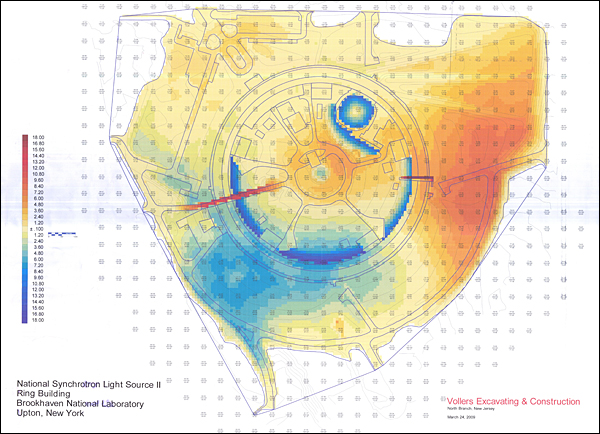 The soil boring study conducted prior to NSLS-II construction produced this colorful structural fill depth map. The sliding color scale represents the elevation of the soil in reference to the planned construction level, colored here a pale yellow. The dark orange and red regions indicate areas where soil must be cut down, while blue regions show where stable soil is located deeper underground. The scale is in feet.

Soil at the NSLS-II site can generally be classified into three categories: a 12-inch surface layer of top soil for vegetation, a bottom layer of more compact and sandy soil known as structural fill, and an intermediate level resting between them. Structural fill is the most stable of these three soil types and provides the best underground support for large facilities such as NSLS-II.

Having a stable foundation of structural fill is especially important for an advanced research facility such as NSLS-II. The giant ring will accelerate electrons to ultra-high speeds and use the intense synchrotron radiation that they emit — 10,000 times brighter than the current NSLS — to image materials with extraordinarily high resolution.

To fulfill this role and conduct experiments with the necessary accuracy, NSLS-II must be located on a stable foundation.

The problem engineers face before constructing buildings like NSLS-II is that structural fill is not uniformly deposited at a single depth beneath the earth’s surface. This variation means that a facility built on an apparently flat plane may not necessarily have the same level of support underneath all areas of that facility. Different degrees of soil compaction could seriously compromise a building’s steadiness, and in the case of NSLS-II, jeopardize its ability to capture high-resolution images with sensitive instrumentation.

Engineers must first analyze the soil composition underneath the proposed construction site through subsurface geotechnical exploration, or soil borings. In the case of NSLS-II, these studies were conducted in three stages from 2006 to 2007.

According to NSLS-II Assistant Director for Construction Management Steve Sawch, finding an optimal soil level for construction is a difficult balancing act because of the variation in the depth of structural fill.

If excavators need to scrape off soil in one area to reach stable material, they have to mine structural fill from another location, ideally on the same site. The goal is to balance the cut and fill operations in order to minimize the need to import or export soil off site, which can be quite expensive.

The soil excavation process of cutting and filling is itself a commonplace technique, but the scope of the project is extraordinary at BNL given the large size of the facility.

“Very similar processes were used for the construction of other buildings on the BNL site, most recently, for the Research Support Building and the Center for Functional Nanomaterials,” Joos said. “The quantities involved for NSLS-II are just significantly larger than those used for the other new buildings.”

The cut and fill operations for NSLS-II began in May 2009. According to NSLS-II Division Director for Conventional Facilities Marty Fallier, this stage of the excavation process is largely complete for the ring building itself. Minor local processes of excavation and backfill will continue as the foundations are placed, and an additional stage of cutting and filling for the lab-office buildings will commence early next summer.