The following announcement from the European Physical Society recognizes the contributions of the CDF and D0 (DZero) Collaborations to the discovery of the top quark and detailed measurements of its properties. Scientists from the U.S. Department of Energy’s Brookhaven National Laboratory played important roles in these efforts, including designing and building a large part of the DZero detector and making significant contributions to the experiment’s software, computing, operations, and analysis. To interview Brookhaven Lab scientists involved in this work, contact: Karen McNulty Walsh, kmcnulty@bnl.gov, 631-344-8350. 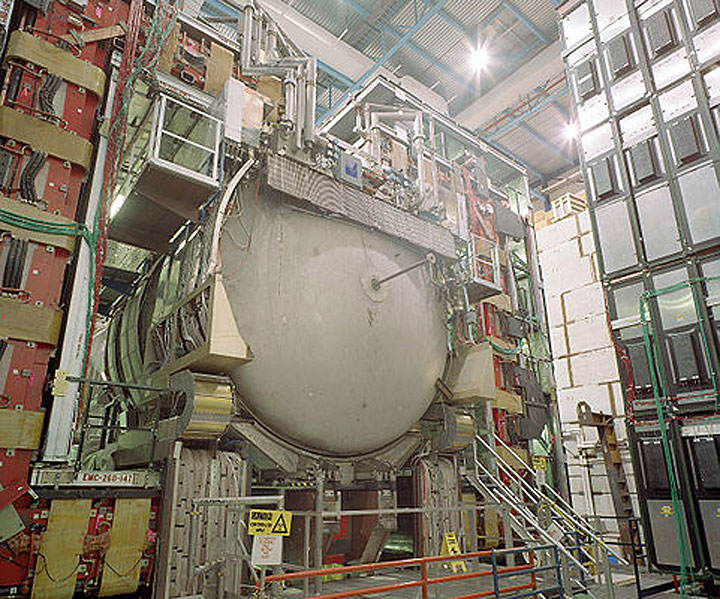 The D0 (DZero) detector at the Tevatron (Credit: Fermilab)

The 2019 High Energy and Particle Physics Prize of the EPS for an outstanding contribution to High Energy Physics is awarded to the CDF and D0 Collaborations for the discovery of the top quark and the detailed measurement of its properties.

The top quark is the heaviest elementary particle known to date and the only quark whose mass of about 173 GeV resides at the electroweak symmetry breaking scale. Its phenomenology is unique: being heavier than a W boson, it immediately decays into a real W boson and a bottom quark after its creation and therefore does not hadronise into mesons or baryons. In addition, it is the only quark whose Yukawa coupling to the Higgs boson is of the order of unity. For these reasons, an accurate knowledge of its properties (mass, width, electroweak couplings, production cross sections, decay branching ratios) brings unique information on the fundamental interactions at the electroweak breaking scale and beyond.

The existence of a third generation was proposed by Kobayashi and Maskawa in 1973 to allow for CP violation in the quark sector. The discovery of the bottom quark in 1977 then triggered the search for the top quark whose existence was required by the internal consistency of the Standard Model of the weak and strong interactions. The search for the top quark lasted for almost two decades, first at electron-positron colliders, and then at higher energy hadron colliders. Lower limits on its mass from direct searches and precision electroweak measurements increased progressively over the years.

In 1986 the Tevatron at the Fermilab National Accelerator Laboratory started colliding protons and anti-protons at a centre-of-mass energy of 1.8 TeV. Evidence for a top quark at a mass of 170-180 GeV was first reported [1] in 1994 by the CDF collaboration. The announcement of the observation was given simultaneously by the CDF and D0 collaborations a year later, in 1995 [2,3]. A key aspect of the discovery was the possibility of detecting two different final states, single-lepton and di-lepton, and discriminating the signal from backgrounds using b-tagging and kinematic variables.

With about 10 fb-1 of data per experiment collected during Run II at 1.96 TeV in 2001- 2011, the CDF and D0 collaborations have determined the top quark key properties (e.g., its mass to better than 1%), measured the top quark pair production cross section at the 10% level [4,5], and finally provided the first observation of the weak production of a single top quark [6,7] in 2009.

CDF and D0 are worldwide collaborations which consist of about 400 scientists and technicians each, see www-cdf.fnal.gov/ and www-d0.fnal.gov/.