World's first demonstration of "bunched-beam" electron cooling at low energy in RHIC opens the possibility of using this technique at high energies for a variety of applications.

Some members of the Low Energy RHIC electron Cooling (LEReC) team in the Main Control Room of Brookhaven Lab's Collider-Accelerator Department. The team successfully demonstrated a bunched-beam electron cooling technique at RHIC, opening up the possibility of applying this technique to produce high-quality ion beams at high energies.

Accelerator physicists have demonstrated a groundbreaking technique using bunches of electrons to keep beams of particles cool at the Relativistic Heavy Ion Collider (RHIC)—a U.S. Department of Energy Office of Science user facility for nuclear physics research at Brookhaven National Laboratory. This “bunched-beam” electron cooling technique will enable higher particle collision rates at RHIC, where scientists study the collision debris to learn about the building blocks of matter as they existed just after the Big Bang. 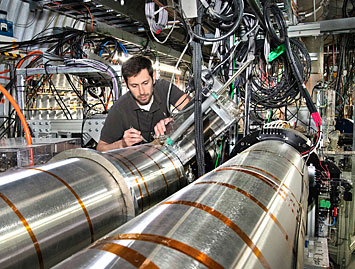 Brookhaven Lab engineer Mathew Paniccia next to the LEReC cooling sections. Electrons have successfully cooled bunches of ions in these cooling sections of the Relativistic Heavy Ion Collider (RHIC).

Brookhaven’s accelerator team is testing the method at the collider’s lowest energies—a regime where data has been scarce yet is crucial to understanding how the particles that filled the early universe transformed into the ordinary matter that makes up our world today.

“The low-energy conditions are actually the most challenging for this technique,” said Alexei Fedotov, the Brookhaven Lab accelerator physicist who led the effort and the team of nearly 100 people who made it happen.

“Now that we’ve demonstrated bunched-beam cooling in the most challenging energy situation, it opens the possibility for applying these same principles at higher energies—including at a possible future Electron-Ion Collider,” he said. 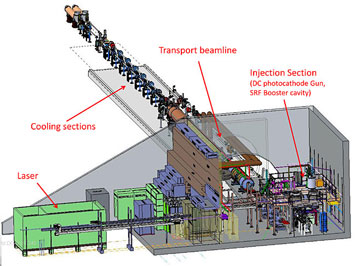 A schematic of the LEReC system, which includes many significant advances in accelerator science. When light from a laser setup outside the RHIC tunnel strikes the photocathode of a unique direct current (DC) photocathode gun, it produces bunches of electrons that are then accelerated by a superconducting radiofrequency (SRF) cavity and transported into cooling sections of RHIC. Here the cold electrons are precisely matched with RHIC's ion bunches in one RHIC ring, then the other, to extract heat and keep the ions tightly packed with the aim of maximizing collision rates.

The accomplishment builds on an idea invented just over 50 years ago by Russian physicist Gersh Budker—namely, using a beam of electrons (which are inherently cooler than larger particles moving at the same speed) to extract heat from a beam of larger particles. This keeps the particles tightly packed and more likely to collide. But the Brookhaven version includes a series of first-in-the-world achievements and innovations even experts in the field doubted could succeed so quickly.

“There were many physics and engineering challenges to overcome,” Fedotov noted.

The team had to build and commission a new state-of-the-art electron accelerator that would fit inside the RHIC tunnel—which included using more compact radiofrequency (RF) acceleration technology rather than the standard direct-current (DC) method used in all previous electron-cooling setups. And because RHIC’s ions circulate as periodic bunches of particles, not a continuous stream, the electrons had to be produced in pulses that matched up with those bunches—not just in timing but also in energy and trajectory—all while maintaining their intrinsic coolness. Plus, because RHIC is really two accelerators, with ion beams moving in opposite directions in two beampipes, the physicists had to figure out how to cool both beams with the same stream of electrons!

“Otherwise we would have had to build two of these electron accelerators,” Fedotov said.

“It’s actually a huge installation made of many complex components, including 100 meters of beamline where the accelerated electrons propagate with the ions in one RHIC beam to extract their heat, then make a 180-degree turn to cool the ions of the other RHIC beam moving in the opposite direction. That has never been done before!” 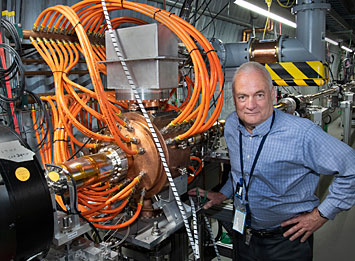 Joseph Tuozzolo, the head engineer for the LEReC project, stands next to a warm radiofrequency cavity used in the project.

To generate and rapidly accelerate these precision electron bunches, the team used a laser-activated photocathode electron gun followed by an accelerating RF cavity. The gun uses a high-frequency high-power laser and Brookhaven-designed photocathodes that are transported 12-at-a-time in a vacuum chamber from Brookhaven’s Instrumentation Division to the RHIC tunnel. Once at RHIC, the vacuum chamber can rotate like a Ferris wheel to switch out photocathodes as they wear out while RHIC is running, enabling the gun to run at high current for long-term operation when access to RHIC is limited.

“When we first talked about this design, in 2015, this was only a drawing!” Fedotov said. “Now we are routinely using it.”

The green laser that triggers the photocathodes to emit pulses of electrons is also the first of its kind—the highest average power green laser ever generated by a single fiber-based laser. Precision alignment and trimming of the laser pulses controls the frequency of the electron bunches generated for cooling.

The laser and photocathode gun produced the first electron pulses in May 2017. Then, after commissioning the first seven meters of beamline (the injector for the accelerator) at end of 2017, the team installed 100 meters of beamline, including five RF cavities and straight cooling sections covered by several layers of magnetic shielding, in January 2018. They then spent last year commissioning the full electron accelerator.

“The main challenge was delivering a beam with all the properties required for cooling—meaning small relative velocities in all directions, with matching energies and small angles—and then propagating this very low-energy electron beam along 100 meters of beam transport line while maintaining those properties,” said Dmitry Kayran, the accelerator physicist who led the commissioning effort. 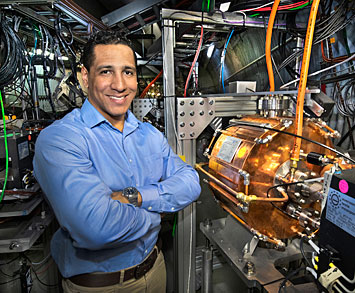 Brookhaven Lab engineer Jean Clifford Brutus next to a deflecting radiofrequency cavity he helped to design and install for the LEReC project.

Kayran described the work on simulations that went into optimizing beam parameters, which guided the installation of beam-monitoring instruments, which in turn determined the placement of the RF acceleration cavities.

“Due to acceleration, beam quality can deteriorate, so you need this monitoring and careful adjustments to keep the energy spread as low as possible,” Kayran said.

“Design of the cooling sections for Low-Energy RHIC electron Cooling (LEReC) is unique,” said accelerator physicist Sergei Seletskiy, who led that part of the effort. “Preserving beam quality in these cooling sections of both RHIC rings is a challenge, and again something that’s been demonstrated for the first time with this project.

“Many unique features and challenges of our project are related to the fact that, for the first time in 50 years, we are applying electron cooling directly at ion-collision energy,” he noted. “Seeing all this tying together and working to cool ions with bunched electron beams and in two collider rings at once is amazing. This is a big achievement in accelerator physics!” 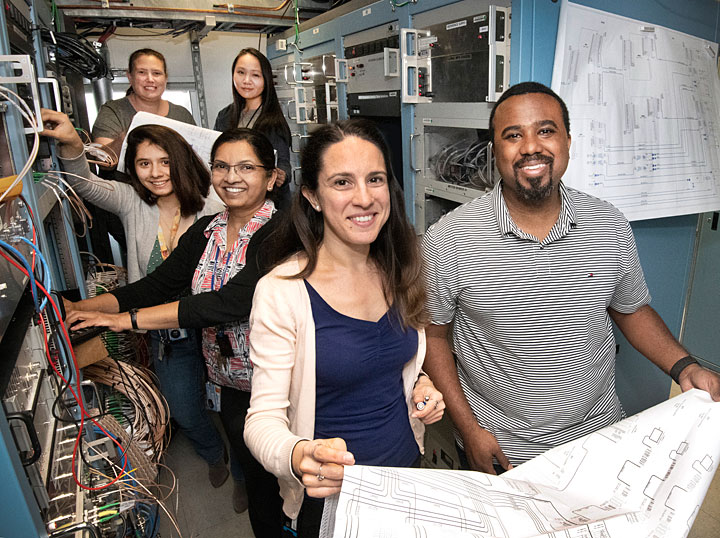 The next step will be to show that the cooling enhances collision rates in next year’s RHIC low-energy collisions—and then extracting the data and what they reveal about the building blocks of matter.