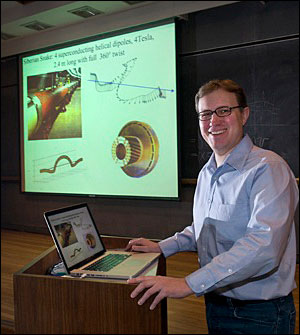 At the Relativistic Heavy Ion Collider (RHIC), scientists are investigating not only the primordial properties of the universe but also another fundamental question of particle physics: the property of “spin.” A particle’s spin comes from its intrinsic angular momentum and is a basic property such as charge or mass.

Experiments using polarized beams also need accelerators capable of accelerating and colliding such beams while preserving polarization. Achieving this, as in so many extraordinary feats that make science discoveries possible, is easier said than done.

To learn about “Challenges in Accelerating and Colliding Polarized Beams,” join physicist Vadim Ptitsyn of the Collider-Accelerator Department when he gives the 455th Brookhaven Lecture at 4 p.m. on Wednesday, February 17, in Berkner Hall. Refreshments will be offered before and after the lecture, which is free and open to the public. Visitors to the Lab 16 and older must carry a photo ID.

Ptitsyn will base his talk on his experience with polarized beams in several electron and proton accelerators as well as in developing plans for a future polarized beam electron-ion collider at RHIC. He will describe some of the depolarizing effects that originate from intrinsic particle motion in accelerators as well as from various machine errors. Particles such as electrons or positrons, which have light mass, present another important factor, synchrotron radiation, which at the same time provides a mechanism for self-polarization of the particle beam and yet introduces strong depolarizing effects.

As Ptitsyn will explain, various techniques and dedicated devices are used to overcome these challenges. These include “Siberian Snakes,” which are a specialized set of magnets that keep particle spins aligned during their acceleration. The snakes have found their applications in both proton and electron machines. The design of these devices to use in RHIC was suggested by Ptitsyn with Yuri Shatunov.

After graduating with a degree in physics from Novosibirsk State University in Russia in 1991, Ptitsyn earned his Ph.D. in physics from BINP, Novosibirsk, in 1997. He has been involved in RHIC operations since arriving at BNL on July 1, 1997 as a postdoctoral research associate and has taken part in achieving many RHIC milestones.

To join Vadim Ptitsyn for dinner after the talk at an off-site restaurant, contact Marion Heimerle, heimerle@bnl.gov, Ext. 4619.