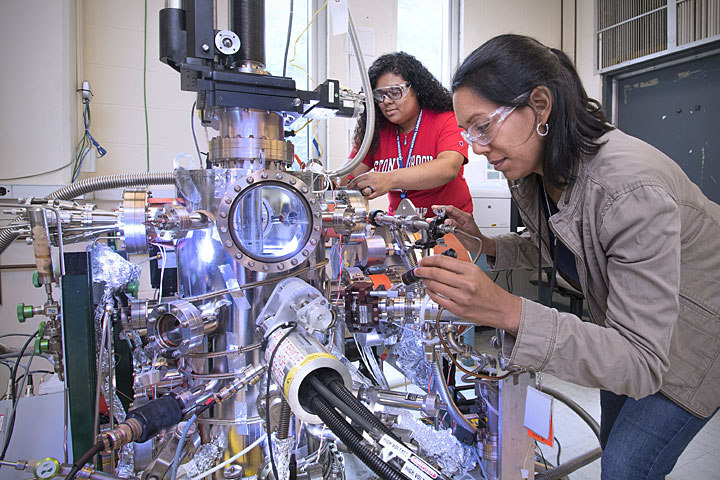 Nylette Lopez (rear) and Stephanie Taboada use state-of-the-art equipment to characterize catalysts as they seek ways to convert carbon dioxide and methane into synthesis gas.

Stephanie Taboada and Nylette Lopez are spending the summer at the U.S. Department of Energy’s (DOE) Brookhaven National Laboratory exploring catalysts, those critical components of chemical reactions that bring reacting chemicals together to get the action started and keep it moving. Though at different stages of their educational journeys, these students were brought together by a few things you could call their catalysts: a common love of science; their mentor, Brookhaven Lab Chemist Jose Rodriguez; and programs designed to increase the participation of women and other underrepresented minorities in careers in STEM—science, technology, engineering, and math.

Under Rodriguez’s guidance, the pair is testing different catalysts for a reaction known as “dry methane reforming.” This process could potentially convert carbon dioxide (CO2) and methane—greenhouse gases we’d like to keep out of Earth’s atmosphere—into “syngas” or “synthesis gas,” a combination of carbon monoxide and hydrogen. Syngas could then be used as a fuel or raw material for making other useful chemicals.

“It’s exciting because we’re contributing to fighting climate change and doing something that benefits society,” said Taboada, a graduate student working toward her Ph.D. in chemical engineering at nearby Stony Brook University (SBU), where Rodriguez also serves as an adjunct professor.

Added Lopez, an engineering undergrad with a specialization in materials science at SBU, “We’re trying to find the fastest way and the most effective way to make the most syngas.”

Taboada comes to Brookhaven as a fellow for the National GEM Consortium. The program recruits graduate students and matches them with potential employers or research laboratories, encouraging students to seek their own mentors at those organizations but providing direction if needed.

“I had met Jose Rodriguez through my SBU advisor, Devinder Mahajan, who works closely with him and thought his lab would be a good choice for me based on what I’m working on at SBU,” Taboada said. She already had several energy-reaction research projects under her belt, and had used tools at Brookhaven Lab’s Center for Functional Nanomaterials, a DOE Office of Science user facility, for a bioengineering project.

“I’ve been involved in research projects pretty much throughout my whole educational career,” Taboada said, including as an undergrad at Stevens Institute of Technology and earning a master’s in chemical engineering at the New Jersey Institute of Technology. “So, I emailed Jose, introduced myself, and requested that he be my mentor,” she said. 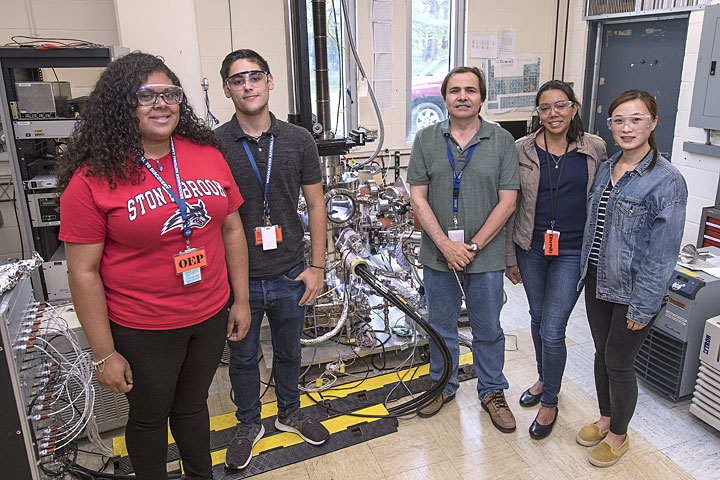 “CSTEP is a New York State-funded program to help underrepresented students in STEM succeed while they’re in college and then find jobs afterwards,” she explained. “We spent one week on the Brookhaven campus, about 40 of us. We’d go to the different labs, they took us on tours, there were different lecturers who came in to tell us what they were working on, and Jose Rodriguez was one of the lecturers,” Lopez said.

The participants were encouraged to apply for the DOE’s Science Undergraduate Laboratory Internships (SULI) program. Lopez did, and requested Rodriguez as her mentor.

This summer the duo are working directly under Feng Zhang, another SBU graduate student Rodriguez is advising, sharing the lab with a range of other students, including two other SULI interns, one more GEM fellow working with Brookhaven chemist Sanjaya Senanayake, two students from DOE’s Community College Internship (CCI) program, two DOE Visiting Faculty Program (VFP) professors (one with a couple of undergraduate students in tow), and one more undergrad sponsored by the National Science Foundation (NSF).

There are other catalysts for dry methane reforming, but some over-oxidize the methane, produce low yield, or make the products difficult to separate out for use.

“We want to be more selective,” Taboada said. “We want to be able to control how much syngas is produced and have better reaction times, efficiency, and better yield.”

While many catalysts for such reactions are metals, Taboada and Lopez are looking at combinations of two metals that might work better together than either metal alone.

“We’re looking at different combinations of nickel and cerium,” Taboada said. When mixed together, the particles arrange themselves on a silicate substrate—a powder-like surface. They’ve done control experiments with just the silicate substrate, no metal particles, and are beginning experiments with different ratios—one nickel, no cerium; one nickel, three cerium; and so on.

“We’re trying to find the right combination of the two different metals to figure out what’s most effective for this reaction,” Lopez said.

“We use a tool called reactor gas chromatography (RGC),” Taboada said. “We heat up the catalyst to activate it. Then we ramp up the temperature, pass gases [CO2 and methane] through the catalyst, and see if there’s a reaction forming and what the products are at the end. The gas chromatography tells us what products come out of the reaction.”

By running lots of different compositions through this system, they’ll be able to see which ones produce the most—and purest—syngas most efficiently.

Lopez agrees. “It’s also exciting to be considered equals with such successful people in the lab. Nobody worries about who has their Ph.Ds. Everyone goes by first names here,” she noted.

Lopez, a native of Long Island, is also excited to have discovered such “cool” science so close to home.

“Just knowing that this is going on in our backyard and a lot of people don’t know about it—it’s very interesting to me,” she said.

Both students plan to stick around in the New York area. Taboada, who is from Queens, said, “My whole life is here. I don’t see myself picking up and moving.” She plans to complete her Ph.D. within two years and hopes to work in the R&D sector of a large chemical corporation.

Lopez has a bit longer to go. “I’m using this summer to help me think—do I want to stay in research, aim for industry? I’m applying for an accelerated program to get my bachelor’s and master’s combined in a total of five years, which means at least three more years of school.”

Both wholeheartedly endorse the internship experience at Brookhaven.

“People here are so helpful,” Taboada said. “There’s a lot of events planned so you can learn about what other people are doing, learn about their techniques, and then apply them to what you are doing.”

Both interns also enjoy interacting with other interns, including, for Lopez, some students from her own university, upstate New York, and even Georgia whom she’d previously met during her mini-semester experience. “It was nice to have some familiar faces when I came,” she said.

She’s looking forward to reporting back to her fellow CSTEP participants at SBU, and maybe inspiring others to apply for future educational programs.