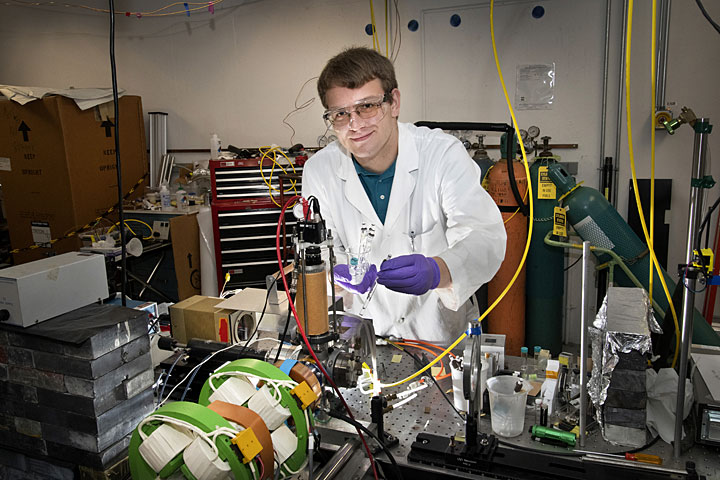 2019 summer intern Christopher Hayes in Brookhaven Lab's Chemistry Division, where he is studying an organic polymer "doped" with clusters of the element boron to understand the energetics of electric charge transfer and escape that are relevant to solar cells. Here, Hayes is shown loading a sample at Brookhaven's Laser Electron Accelerator Facility.

Chemistry was the subject in school that Christopher Hayes enjoyed the most. However, the Long Island, New York, native entered Stony Brook University (SBU) unsure of his course of study. This past spring, he graduated with degrees in chemistry and computer science. Both are coming in handy for his summer internship in the Chemistry Division at the U.S. Department of Energy’s (DOE) Brookhaven National Laboratory through DOE’s Science Undergraduate Laboratory Internships (SULI) program.

“I’ve always liked that chemistry involves a lot of math, but the quantitative side is complemented by many intricacies that are not easy to quantify yet are massively impactful,” said Hayes, who obtained his associate’s degree in chemistry from Suffolk County Community College when he was 14. “Chemistry is not purely math based; there is an art to it. I love programming for a similar reason—you can have an algorithm that is not only correct but also elegant.”

While an undergraduate at SBU, Hayes did some computational chemistry research modeling the hydrolysis (chemical reaction with water) mechanism of sarin, a toxic nerve agent. But he had never been in a lab environment like the one at Brookhaven.

For his summer internship, Hayes is studying conductive organic polymers, which are long-chain molecules that can transport electrons—ideally to flow out of a solar cell to produce electricity. Over the past couple of weeks, he has been trying to make polymers “doped” with boron clusters to understand the energetics of electric charge transfer and escape that are relevant to solar cells. In this model system, the charge carrier pairs (electrons and holes, i.e., the absence of electrons) are formed by combining the two molecules in solution rather than transiently with light, so the charges hang around long enough to study.

Scientists at the University of California, Los Angeles, developed the boron clusters a couple of years ago. These clusters are surrounded by “tunable” organic side chains, which shield the negative charge on the central cluster to allow for a higher mobility of the nearby positive charge carriers on the polymer chains. A higher mobility is desirable because charges are more likely to escape the system, resulting in higher efficiency. However, finding a suitable high-purity solvent for these very strong electron-accepting molecules has been difficult.

“In a real solar cell, you typically have polymers in a molecular film rather than a solvent,” explained Hayes. “The solvent lets us study the polymers’ absorption behavior as we slowly change the concentration of the dopant—a task that is impossible to do in a molecular film, which essentially has a fixed composition once it is made. We found a couple of solvents, including benzene, that should work, but the reactivity of the clusters presents a challenge with regard to solvent purity.”

To study the absorption behavior of the polymers, Hayes employs an analytical technique called ultraviolet-visible (UV-Vis) spectroscopy. Organic compounds absorb light energy in the UV and Vis regions of the electromagnetic spectrum. This absorption causes atoms and molecules to undergo electronic transitions in which electrons jump from a lower-energy ground state to a higher-energy excited state. The idea in solar cells is to extract the excited electron and use its extra energy in an electrical circuit to generate electricity.

For his experiments, Hayes is mostly studying P3HT, an organic polymer commonly used in electronics research.

“The polymer needs to have a tendency to donate electrons that is similar to the tendency of the boron clusters to accept electrons,” explained Hayes. “An electron on the polymer requires a certain amount of energy to be removed. We want an electron-accepting molecule at a similar energy level so that there is not a huge change in energy when the electron transfers. Otherwise, the polymer will be fully doped or not doped at all. We are focusing on P3HT because the energy level is suitable and it has good solubility in the solvent that the boron clusters dissolve in.”

Christopher Hayes, a recent graduate of Stony Brook University with degrees in chemistry and computer science, was a 2019 summer intern in the Chemistry Division at Brookhaven Lab through the U.S. Department of Energy's Science Undergraduate Laboratory Internships program. Using ultraviolet-visible spectroscopy, he studied organic polymers "doped" with boron clusters to understand the energetics of electric charge transfer and escape that are relevant to solar cells.

Hayes notes that his mentor—Brookhaven assistant chemist Matt Bird—and other members of the Chemistry Division’s Electron- and Photo-Induced Processes for Molecular Energy Conversion research group are also collaborating with the DOE’s National Renewable Energy Laboratory on solutions of carbon nanotubes (long conductive chains of carbon atoms) as an alternative to organic polymers.

In addition to using a lab bench spectrometer to obtain the spectra of the samples, Hayes uses Brookhaven’s Laser Electron Accelerator Facility (LEAF). At LEAF, a laser is directed at a target, kicking off electrons that are accelerated to ionize (create ions, or atoms with positive or negative charges) the molecules in a sample solution. The absorption of the sample can be measured with the same laser system used to eject the electrons. LEAF is especially useful for nonpolar solutions, in which charges cannot be created with traditional electrochemical methods. Nonpolar solutions mimic the low-polarity environment of molecular films used in solar cells, enabling electron transfer processes to be studied accurately.

“LEAF is basically UV-Vis spectroscopy with a fancy accelerator attached,” explained Hayes. “Getting to use LEAF is really interesting because it is one of two such facilities in the country. Traditional UV-Vis is much more limited—you can only observe the behavior of a solution at equilibrium—but it is great for getting a general idea of the change in absorption caused by doping. Using LEAF, we can measure electron transfer rates over very short timescales—a couple of nanoseconds, or billionths of a second.”

Some of the raw spectral data from LEAF and other experiments are automatically processed, but other parts must be analyzed manually to obtain useful information, such as extinction coefficients (how strongly the samples absorb light of a given wavelength) and electron transfer rates.

A typical day for Hayes consists of meeting with his mentor in the morning, preparing samples and running various experiments during the day, and then analyzing the data in the evening or following morning.

“Chris has been a delight to work with,” said Bird. "His background in chemistry and computer science has been a perfect match for the project. He has written a number of programs that will speed up a lot of the analysis we do, excelled in the lab with hands-on experiments, and provided great theoretical insight enabling us to overcome some of the challenges we’ve encountered.”

Hayes is not sure what his career plans are, but he intends to pursue graduate school in the near term, continuing the same chemistry and computer science track. At only 18 years old, he will likely be one of the youngest graduate students in his program.

As a SULI intern, Hayes is the third generation in his family to come to Brookhaven Lab—his grandfather was a theoretical physicist here, his father is a radio-frequency engineer at Brookhaven’s Relativistic Heavy Ion Collider (a DOE Office of Science User Facility), his mother is a former environmental risk assessment statistician, and his sister is a former SULI intern in the Environmental and Climate Sciences Department.

“This summer, I’m enjoying the chance to get more research experience and develop hands-on lab skills,” said Hayes. “I like the environment at Brookhaven, and I’m trying to decide where to go in the future.”