This story was originally published on Sept. 13 in Penn Today. It describes research from the lab of Christopher Murray, the Richard Perry University Professor of Chemistry and Materials Science and Engineering, on designing a stable catalyst for a fuel cell cathode using cost-effective nanomaterials. University of Pennsylvania graduate student Jennifer Lee led the research, imaging the nanomaterials at high resolution with electron microscopes at Brookhaven Lab’s Center for Functional Nanomaterials (CFN). Lee carried out the experiments at the CFN—a DOE Office of Science User Facility—through the DOE Office of Science Graduate Student Research Program.

A collaborative study describes how fuel cells, which use chemical energy to power cars and devices, can be developed using nanomaterials to be more cost-effective and efficient in the long term 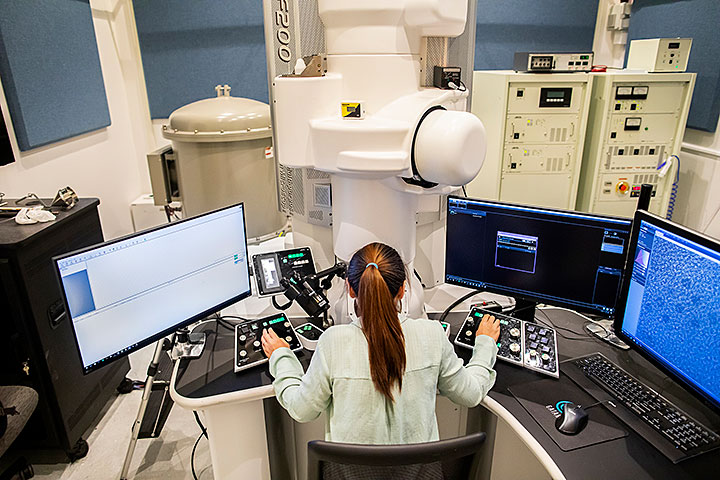 Graduate student Jennifer Lee uses a large transmission electron microscope, housed in the Singh Center, to take a closer look at the nanomaterials and nanocrystals that are synthesized in the lab.

As renewable sources such as wind and solar are quickly changing the energy landscape, scientists are looking for ways to better store energy for when it’s needed. Fuel cells, which convert chemical energy into electrical power, are one possible solution for long-term energy storage, and could someday be used to power trucks and cars without burning fuel. But before fuel cells can be widely used, chemists and engineers need to find ways to make this technology more cost-effective and stable.

The chemical reaction that powers a fuel cell relies on two electrodes, a negative anode and a positive cathode, separated by an electrolyte, a substance that allows the ions to move. When fuel enters the anode, a catalyst separates molecules into protons and electrons, with the latter traveling toward the cathode and creating an electric current.

Chemists can address these two problems by designing custom nanomaterials that have platinum at the surface while using more common metals, such as cobalt, in the bulk to provide stability. The Murray group excels at creating well-controlled nanomaterials, known as nanocrystals, in which they can control the size, shape, and composition of any composite nanomaterial. 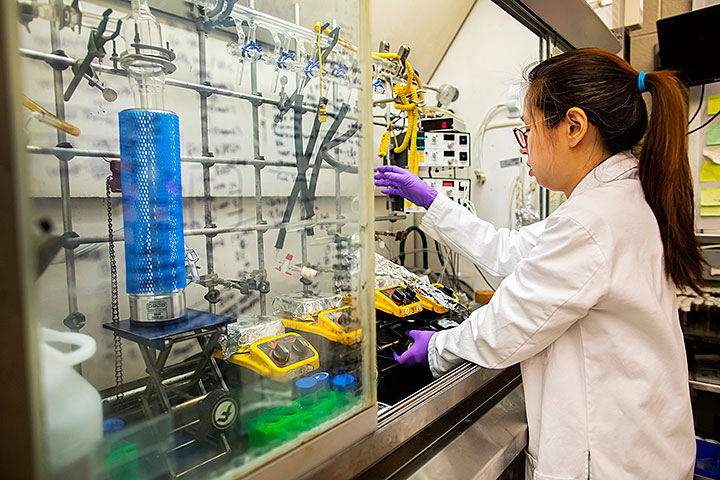 When not busy at the microscope or analyzing data, researchers in the Murray group work on synthesizing new nanomaterials.

In this study, Lee focused on the catalyst in the cathode of a specific type of fuel cell known as a proton exchange membrane fuel cell. “The cathode is more of a problem, because the materials are either platinum or platinum-based, which are expensive and have slower reaction rates,” she says. “Designing the catalyst for the cathode is the main focus of designing a good fuel cell.”

The challenge, explains Jishkariani, was in creating a cathode in which platinum and cobalt atoms would form into a stable structure. “We know cobalt and platinum mixes well; however, if you make alloys of these two, you have added atoms of platinum and cobalt in a random order,” he says. Adding more cobalt in a random order causes it to leach out into the electrode, meaning that the fuel cell will only function for a short time.

To solve this problem, researchers designed a catalyst made of layered platinum and cobalt known as an intermetallic phase. By controlling exactly where each atom sat in the catalyst and locking the structure in place, the cathode catalyst was able to work for longer periods than when the atoms were arranged randomly. As an additional unexpected finding, the researchers found that adding more cobalt to the system led to greater efficiency, with a 1-to-1 ratio of platinum to cobalt, better than many other structures with a wide range of platinum-to-cobalt ratios.

The next step will be to test and evaluate the intermetallic material in fuel cell assemblies to make direct comparisons to commercially-available systems. The Murray group will also be working on new ways to create the intermetallic structure without high temperatures and seeing if adding additional atoms improve the catalyst’s performance.

The Xeuss 2.0 X-ray scattering instrument, which came to the LRSM in 2018, helps researchers characterize the structures of a wide range of hard and soft materials.

This work required high-resolution microscopic imaging, work that Lee previously did at Brookhaven National Lab but, thanks to recent acquisitions, can now be done at Penn in the Singh Center for Nanotechnology. “Many of the high-end experiments that we would have had to travel to around the country, sometimes around the world, we can now do much closer to home,” says Murray. “The advances that we’ve brought in electron microscopy and X-ray scattering are a fantastic addition for people that work on energy conversion and catalytic studies.”

Lee also experienced first-hand how chemistry research directly connects to real world challenges. She recently presented this work at the International Precious Metals Institute conference and says that meeting members of the precious-metals community was enlightening. “There are companies looking at fuel cell technology and talking about the newest design of the fuel cell cars,” she says. “You get to interact with people that think of your project from different perspectives.”

Murray sees this fundamental research as a starting point towards commercial implementation and real world application, emphasizing that future progress relies on the forward-looking research that’s happening now. “Thinking about a world where we’ve displaced a lot of the traditional fossil fuel-based inputs, if we can figure out this interconversion of electrical and chemical energy, that will address a couple of very important problems simultaneously.”

Christopher Murray is a Penn Integrates Knowledge Professor with appointments in two schools at the University of Pennsylvania. He is the Richard Perry University Professor of Chemistry in the Department of Chemistry in the School of Arts and Sciences and a professor in the Department of Materials Science and Engineering in the School of Engineering and Applied Science.

Davit Jishkariani is the associate technical director of the Chemical and Nanoparticle Synthesis Core at the University of Pennsylvania.