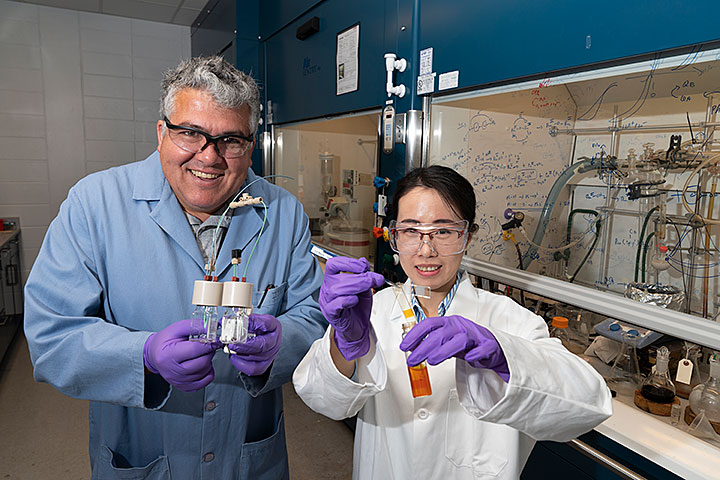 Brookhaven Lab chemist Javier Concepcion and Lei Wang, a graduate student at Stony Brook University, devised a scheme for assembling light-absorbing molecules and water-splitting catalysts on a nanoparticle-coated electrode. The result: production of hydrogen gas fuel via artificial photosynthesis and a platform for testing different combos to further improve efficiency.

UPTON, NY—Scientists at the U.S. Department of Energy’s Brookhaven National Laboratory have doubled the efficiency of a chemical combo that captures light and splits water molecules so the building blocks can be used to produce hydrogen fuel. Their study, selected as an American Chemical Society “Editors’ Choice” that will be featured on the cover* of the Journal of Physical Chemistry C, provides a platform for developing revolutionary improvements in so-called artificial photosynthesis—a lab-based mimic of the natural process aimed at generating clean energy from sunlight.

In natural photosynthesis, green plants use sunlight to transform water (H2O) and carbon dioxide (CO2) into carbohydrates such as sugar and starches. The energy from the sunlight is stored in the chemical bonds holding those molecules together.

Many artificial photosynthesis strategies start by looking for ways to use light to split water into its constituents, hydrogen and oxygen, so the hydrogen can later be combined with other elements—ideally the carbon from carbon dioxide—to make fuels. But even getting the hydrogen atoms to recombine as pure hydrogen gas (H2) is a step toward solar-powered clean-fuel generation.

To achieve water splitting, scientists have been exploring a wide range of light-absorbing molecules (also called chromophores, or dyes) paired with chemical catalysts that can pry apart water’s very strong hydrogen-oxygen bonds. The new approach uses molecular “tethers”—simple carbon chains that have a high affinity for one another—to attach the chromophore to the catalyst. The tethers hold the particles close enough together to transfer electrons from the catalyst to the chromophore—an essential step for activating the catalyst—but keeps them far enough apart that the electrons don’t jump back to the catalyst.

Generating fuel from sunlight: First, tin oxide (SnO2) nanoparticles get coated with a titanium dioxide (TiO2) shell. Next, scientists coat the nanoparticles with light-absorbing dye molecules that have dangling tethers. Then they add catalyst molecules that attach by their own tethers. In the final setup, sunlight excites the dye, kicking electrons from dye to nanoparticle shell, nanoparticle core, and then out of the electrode via a wire. The electron-deficient dye, in turn, grabs electrons from the catalyst. Once the catalyst has lost four electrons, it can steal four electrons from two water molecules, thereby splitting water into hydrogen ions and oxygen. At a second electrode, the hydrogen ions recombine with electrons to produce H2 — hydrogen gas fuel. Animation credit: Stony Brook University graduate student and study coauthor Lei Wang

“Electrons move fast, but chemical reactions are much slower. So, to give the system time for the water-splitting reaction to take place without the electrons moving back to the catalyst, you have to separate those charges,” explained Brookhaven Lab chemist Javier Concepcion, who led the project.

In the complete setup, the chromophores (tethered to the catalyst) are embedded in a layer of nanoparticles on an electrode. Each nanoparticle is made of a core of tin dioxide (SnO2) surrounded by a titanium dioxide (TiO2) shell. These different components provide efficient, stepwise shuttling of electrons to keep pulling the negatively charged particles away from the catalyst and sending them to where they are needed to make fuel.

Each time the catalyst loses four electrons, it becomes activated with a big enough positive charge to steal four electrons from two water molecules. That breaks the hydrogen and oxygen apart. The oxygen bubbles out as a gas (in natural photosynthesis, this is how plants make the oxygen we breathe!) while the hydrogen atoms (now ions because they are positively charged) diffuse through a membrane to another electrode. There they recombine with the electrons carried by the wire to produce hydrogen gas—fuel!

The Brookhaven team had tried an earlier version of this chromophore-catalyst setup where the light-absorbing dye and catalyst particles were connected much more closely with direct chemical bonds instead of tethers.

“This was very difficult to do, taking many steps of synthesis and purification, and it took several months to make the molecules,” Concepcion said. “And the performance was not that good in the end.”

In contrast, attaching the carbon-chain tethers to both molecules allows them to self-assemble.

“You just dip the electrode coated with the chromophores into a solution in which the catalyst is suspended and the tethers on the two types of molecules find one another and link up,” said Stony Brook University graduate student Lei Wang, a coauthor on the current paper and lead author on a paper published earlier this year that described the self-assembly strategy.

The versatility of this approach will allow us to do fundamental studies that would not have been possible without this system.

The new paper includes data showing that the system with tethered connections is considerably more stable than the directly connected components, and it generated twice the amount of current—the number of electrons flowing through the system.

“The more electrons you generate from the light coming in, the more you have available to generate hydrogen fuel,” Concepcion said.

The scientists also measured the amount of oxygen produced.

“We found that this system, using visible light, is capable of reaching remarkable efficiencies for light-driven water splitting,” Concepcion said.

But there’s still room for improvement, he noted. “What we’ve done to this point works to make hydrogen. But we would like to move to making higher value hydrocarbon fuels.” Now that they have a system where they can easily interchange components and experiment with other variables, they are set to explore the possibilities.

“One of the most important aspects of this setup is not just the performance, but the ease of assembly,” Concepcion said.

“Because these combinations of chromophores and catalysts are so easy to make, and the tethers give us so much control over the distance between them, now we can study, for example, what is the optimal distance. And we can do experiments combining different chromophores and catalysts without having to do much complex synthesis to find the best combinations,” he said. “The versatility of this approach will allow us to do fundamental studies that would not have been possible without this system.”

This research was funded by the DOE Office of Science and was conducted in collaboration with scientists from the Alliance for Molecular PhotoElectrode Design for Solar Fuels EFRC, a DOE Office of Science Energy Frontier Research Center at the University of North Carolina, Chapel Hill. UNC scientists provided the core-shell nanoparticles. Design and synthesis of the system were done at Brookhaven Lab; transient kinetics and photoelectrochemistry studies were carried out at UNC.

* Tentatively scheduled for the cover of the December 19, 2019, print edition of the Journal of Physical Chemistry C