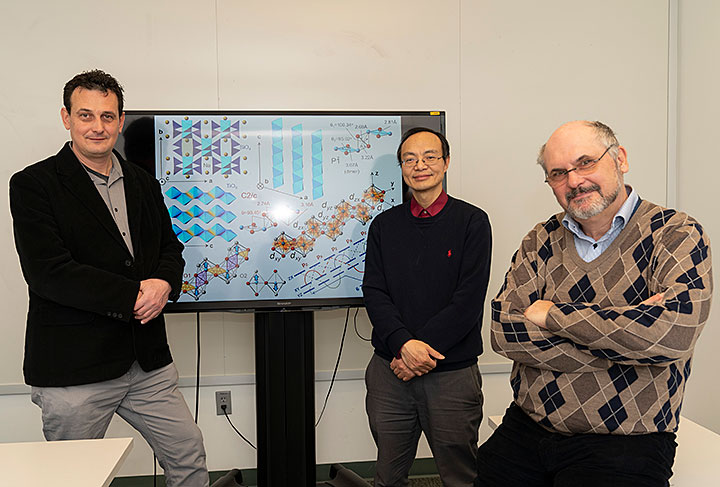 Brookhaven Lab physicists (left to right) Emil Bozin, Weiguo Yin, Alexei Tsvelik, and (not pictured) Northeastern physics professor Adrian Feiguin used computational modeling and a state-of-the-art iterative numerical technique to study the properties of a jade-like green mineral, whose crystal and orbital structures are shown on the screen. Their analysis suggested that such minerals (part of the "pyroxene" family) could host an exotic magnetic state, which could be harnessed for next-generation energy and computing applications.

A liquid-like magnetic state of matter called a quantum spin liquid (QSL) is a rarity, but an experiment followed by a theoretical study at the U.S. Department of Energy’s (DOE) Brookhaven National Laboratory has pointed scientists in the right direction to find materials that can host this state.

The QSL state only happens in solid magnetic materials whose electron spins do not order, even continuing to change direction in a fluid-like motion at the coldest temperatures. By contrast, electrons in conventional magnets point up or down according to some repeating pattern. For example, in refrigerator magnets, all the spins point toward the same direction.

Scientists theoretically proposed the existence of QSLs in the 1970s. However, finding real materials that can host this exotic state—which corresponds to extraordinary properties that could be harnessed for next-generation energy and computing applications—has been a challenge.

“It is difficult to find proper QSL materials because one of the highly desirable ingredients is orbital degrees of freedom,” explained Alexei Tsvelik, a senior scientist and leader of the Condensed Matter Theory Group in Brookhaven Lab’s Condensed Matter Physics and Materials Science (CMPMS) Division. “Electrons are distributed around atomic nuclei in orbits somewhat similar to how planets are distributed around the sun. Typically, different orbits correspond to different energies. However, in QSLs, different orbitals can have the same energy. To order, electrons must choose a particular orbital among equivalent ones. When electrons not only have to choose their orbital but also their spin direction, quantum fluctuations increase. Strong quantum fluctuations lead to the QSL state by preventing the formation of long-range magnetic order.”

Essentially, these frustrated electrons have too many choices to make. This predicament is akin to the overwhelming number of ice cream products or cereals available for purchase at the grocery store. The more options we have, the more difficult it is to choose—or in the case of electron spins, to order.

Crystal structure of minerals with the chemical formula AM (Si, Ge)2O6, where A is usually a metal from Group 1 on the periodic table (such as sodium, Na) and M is a metal ion with three valence electrons (such as aluminum, Al) for bonding. One example is the famous Chinese jade "fei tsui," which has the chemical formula NaAlSi2O6.

The Brookhaven scientists got the hint that a particular material had active orbital degrees of freedom somewhat by chance. Emil Bozin, a physicist in the CMPMS Division’s X-ray Scattering Group, was studying a jade-like green mineral made of sodium, titanium, silicon, and oxygen (NaTiSi2O6) when he discovered distortions in its local lattice structure at high temperatures. In this class of minerals, such distortions normally occur only at low temperatures. He shared the unexpected result with Weiguo Yin, a physicist in Tsvelik’s group. Looking at the crystal and electronic structure of the material, they determined that the distortions were occurring over an unusual length scale of every six titanium atoms. With this result, they knew they were onto something.

“From this experiment, we got the idea that a degree of freedom with three orbitals on the titanium atoms is active in this material,” said Yin. “The titanium atoms form zigzag chains that have a repeating pattern of two. Thus, in a similar way to solving a least-common-multiples problem, we figured out that the six-atom periodicity corresponds with repeatedly connecting three orbitals between neighboring titanium atoms.”

To study the material’s orbital and spin dynamics, the team—also including Northeastern University theoretical physicist Adrian Feiguin—first turned to a popular computational modeling method called density functional theory (DFT). Through DFT calculations, they determined the electronic structure of the material at its lowest-energy (ground) state. On the basis of this electronic structural model, they analyzed the material’s magnetic excitation spectrum by applying a state-of-the-art iterative numerical technique (time-dependent density matrix renormalization group). Their analysis indicated that replacing titanium with ruthenium—in effect tuning the atomic size and energy level of the atom that hosts the spin and orbital degrees of freedom—could generate even stronger fluctuations for suppressing magnetic order.

Next, Bozin will experimentally test this prediction by probing the magnetic response of the titanium- and ruthenium-based minerals through x-ray and neutron scattering experiments.

“An interplay between theory and experiment was critical in this case,” said Yin. “Bozin’s unexpected experimental finding stimulated our theoretical study, the results of which will now guide follow-on experiments. Continued collaboration among theorists and experimentalists will accelerate the realization of QSLs.”

Materials in which magnetism never freezes are expected to be useful in several applications. For example, a disordered spin state could provide a mechanism for high-temperature superconductivity—the lossless transmission of electrical current at temperatures relatively higher than the cryogenic ones normally required to induce the superconducting state. Quantum spin liquids could also be harnessed for quantum computing by helping to maintain the integrity of data-storing quantum information bits (qubits), which would otherwise be corrupted by external forces such as heat or magnetic fields.

All authors of this work were supported by the DOE Office of Science.