Empire State Development (ESD) and the Long Island STEM Hub today announced the launch of a new video series and curriculum for children in grades K-12 titled “Full STEM Ahead Long Island,” which will highlight science, technology, engineering and mathematics (STEM) careers available on Long Island. The series is intended to encourage students to start thinking about a future in STEM — furthering Governor Cuomo’s efforts to build Long Island’s innovation corridor and strengthen workforce development across the state.

“On Long Island and across the Empire State, our innovation economy is surging, and we want to ensure New Yorkers are prepared to thrive in the jobs of today — and tomorrow,” Empire State Development Acting Commissioner and President & CEO-designate Eric Gertler said. “Workforce development is critical to economic development, and we are proud of this partnership, which has brought together government, private industry, non-profits and educators to provide opportunities for students to learn about STEM careers.”

Check Out the First Full Episode

Watch the New York Emmy-nominated first episode "Crushin' it with Composites" and see the curriculum on the Long Island STEM Hub website.

Founded in 2011, the Long Island STEM Hub is a volunteer consortium of industry, academic and not-for-profit professionals from across Long Island working to advance science, technology, engineering and math education in the region. Promoting STEM programs in grades K-12 is critical to ensuring students on Long Island have the key skills that will drive the 21st century tech economy, strengthen existing business on Long Island and draw more companies to the region.

The new video campaign and matching curriculum launched today — “Full STEM Ahead Long Island” — includes 10 videos, which will be released in the coming months. The series will highlight growth industries on Long Island, including healthcare and bioengineering, and will encourage students, teachers, and parents to discuss the skills and talents needed to pursue STEM careers. The first video, “Crushin’ it with Composites,” focuses on manufacturing and has already been nominated for a New York Emmy Award. The “Full STEM Ahead Long Island” project was supported by a $320,000 grant from Empire State Development, awarded through the Long Island Regional Economic Development Council process. 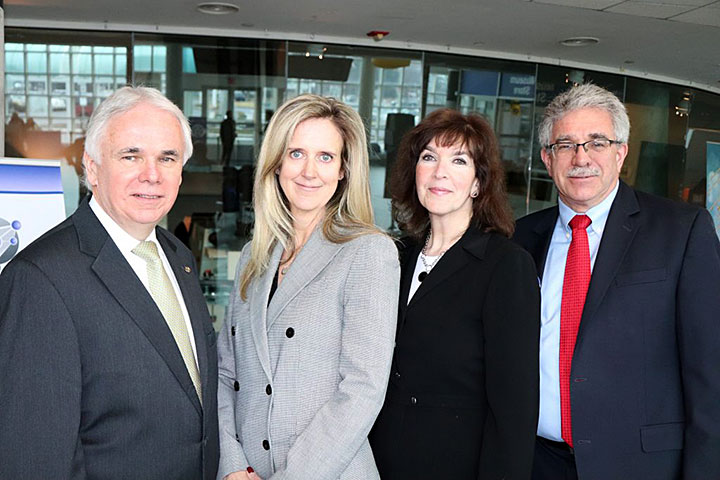 Since 2011, New York State has invested over $250 million in supporting Long Island’s innovation corridor, including advancing projects including Cold Spring Harbor Laboratory’s Center for Therapeutics Research, an electron microscope building at Brookhaven National Laboratory, and Stony Brook University’s Institute for Discovery and Innovation in Medicine & Engineering, among many others. Just last month, the U.S. Department of Energy announced that a one-of-a-kind electron-ion collider will be built on Long Island, thanks to strategic state investments — including $165 million to support the collider project.

Kevin Law, LIREDC Co-Chair and Long Island Association President, said, “Innovation is in Long Island’s DNA, and the REDC has been proud to invest in our region’s unmatched biotech corridor. But while we are creating jobs, we also must make sure we are preparing young Long Islanders to fill those jobs. This partnership will do just that — ensuring that, as our economy develops, our highly-skilled workforce also continues to grow.”

Stuart Rabinowitz, LIREDC Co-Chair and President of Hofstra University, said, “Long Island has a wealth of world-class educational institutions and thanks to smart state investments, researchers across the island are making new discoveries, creating new companies, and generating jobs. It is critical that we continue to invest in education — and this new video series and curriculum will ensure the next generation of Long Islanders are interested in the STEM jobs of the future. I am proud to support this project and look forward to seeing what the next generation of Long Island’s scientists discover.”

“It is important that we work to retain the talented and bright young minds that are educated in our nationally competitive school districts in Nassau County and across Long Island. I want to thank Governor Cuomo and Empire State Development for funding the ‘Full STEM Ahead Long Island’ program, which will undoubtedly excite our young residents about the innovative STEM focused career paths available right here on Long Island,” said Nassau County Executive Laura Curran.

“As a father of three young children, I strongly believe in the need to mentor, educate and encourage our children to develop interests in Science, Technology, Engineering and Math from an early age,” said Suffolk County Executive Steve Bellone. “Thanks to Governor Cuomo, Empire State Development and the LI STEM Hub, our region is poised to open countless doors of opportunity for our children to explore the limitless bounds of the career prospects in the fields of science and technology.”

Empire State Development (ESD) is New York’s chief economic development agency. The mission of ESD is to promote a vigorous and growing economy, encourage the creation of new job and economic opportunities, increase revenues to the State and its municipalities, and achieve stable and diversified local economies. Through the use of loans, grants, tax credits and other forms of financial assistance, ESD strives to enhance private business investment and growth to spur job creation and support prosperous communities across New York State. ESD is also the primary administrative agency overseeing Governor Cuomo’s Regional Economic Development Councils and the marketing of “I LOVE NY,” the State’s iconic tourism brand. For more information on Regional Councils and Empire State Development, please visit and www.esd.ny.gov.