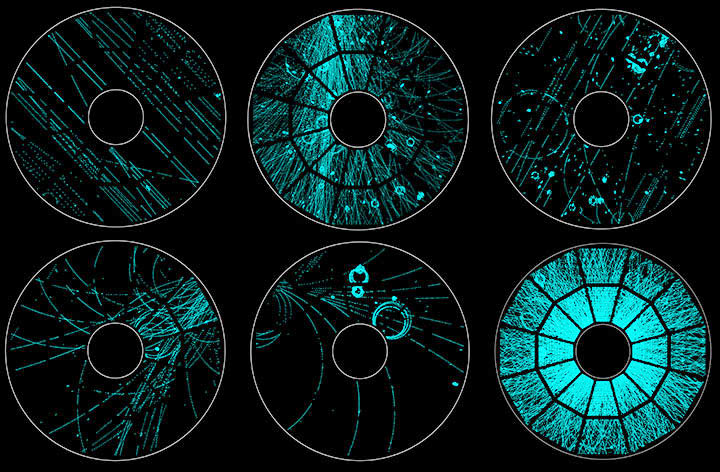 To help calibrate the STAR detector, physicists track and capture images of showers of cosmic rays streaming from space. Can you pick out which image shows tracks from a particle collision at RHIC (hint: the collision occurred at the center of the detector)?

These images capture the movement and collisions of “cosmic rays”—mysterious particles originating somewhere in deep space—as they stream through the STAR detector at the Relativistic Heavy Ion Collider (RHIC). The results are profoundly beautiful.

The rays, made mostly from the result of supernovae explosions and reaching us at nearly the speed of light, are not just things of beauty. Physicists conducting research at RHIC—a U.S. Department of Energy Office of Science user facility for nuclear physics research at Brookhaven National Laboratory—use their signals as a tool for calibrating the massive detectors collecting data for the collider’s physics experiments.

The “heart” of the STAR detector is its Time Projection Chamber, a four-meter-wide, 4.2-meter-long cylinder filled with a gas mixture of argon and methane, explained Irakli Chakaberia, a research scientist on the STAR experiment. Each of the detector’s endcaps has 12 “sectors,” each with 72 padrows that sense electric charge, acting as a camera that can capture over 2,000 images a second. Tracing the trails of a shower of cosmic rays passing through the gas helps scientists know if their detector components are all working correctly.

The higher the energy of the original cosmic track, the bigger the proliferation of the shower, creating what appear to be more “lively” images with many tracks in the chamber. How linear the path appears helps show the particle’s speed—the faster the particle moves, the straighter its path. Particles with no electric charge always move in straight lines; however, they cannot even be seen by the detector. STAR is only able to track charged particles, which get pulled by the the detector’s magnetic field, creating a curve. Those with lower momentum, called “soft” particles, are pulled more by the detector’s magnets and curve more than faster ones.

“Based on the direction of the curve, we can tell whether the particle is positively or negatively charged,” Chakaberia said. 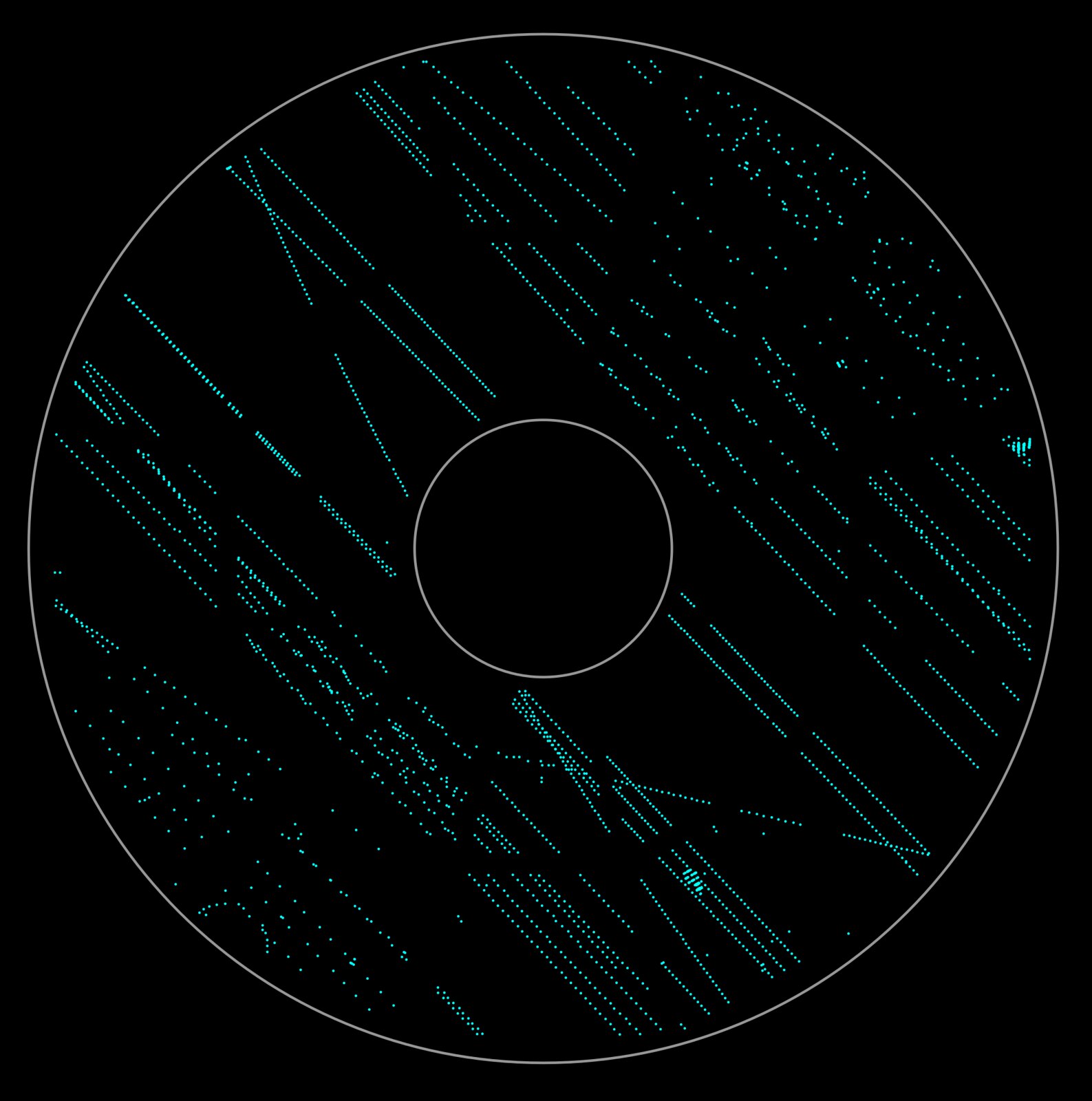 When a cosmic ray particle collides with an atom of the gas in the detector, it might produce a “softer” particle moving with lower energy. Losing more energy as it travels round and round, the particle creates the curious circles in the images called “loopers.” Sometimes in the initial cascade, there are particles “soft” enough to loop around on their own.

Even though physicists use powerful computers to analyze data from STAR, “nothing replaces an actual human eye,” Chakaberia said.

“For example, when looking at some cosmic data, there was a case where tens of tracks were reconstructed in a single detector sector,” Chakaberia said. “This could, in principle, happen, but after checking the event display by eye it was obvious that it was a result of noise in that sector. The software couldn’t distinguish between the noise and real events to some degree. So these track displays help a lot to figure out what's going on.”

After cosmic rays have done their job testing and calibrating, STAR is ready to capture the thousands of tracks produced by ion collisions at RHIC. To increase the chance of two ions colliding, billions are aimed at each other with each pass through the detector, and the tracks reveal more of the beauty and the art that can be found in science. In this case, all the particle tracks emerge from the center of the detector, where the collision takes place. (Can you find the one ion-collision event in the images shown here?)

Nuclear physicists analyze the ion-collision tracks to learn about a remarkable state of matter created in RHIC’s heavy-ion collisions. This “quark-gluon plasma” is a soup of particles that mimics what the universe was like just after the Big Bang. It’s a kind of cosmic connection: Scientists use a detector calibrated by particles from the cosmos to learn more about the marvelous and mystifying universe that created them.

Research at RHIC/STAR is funded by the DOE Office of Science and by funders of the STAR collaboration listed here.