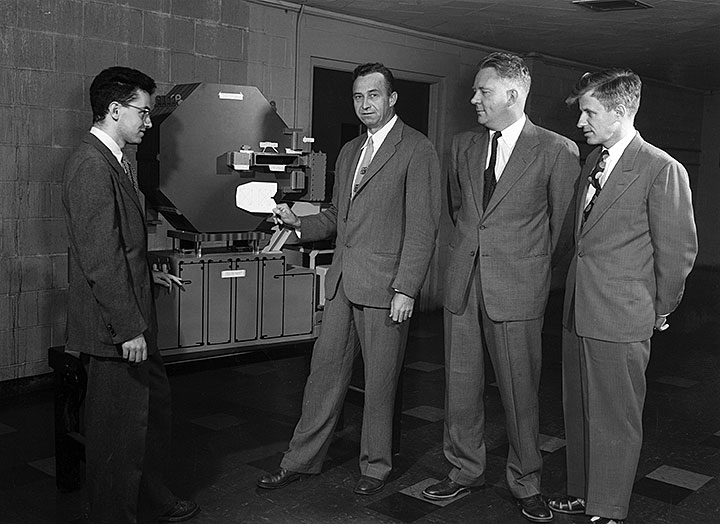 A young Ernest Courant with Stanley Livingston, Hartland Snyder, John Paul Blewett, and one of the "strong-focusing" alternating-gradient accelerator magnets that would revolutionize the design of particle accelerators around the world.

Ernest Courant, one of three scientists who originated the idea of “strong focusing” accelerators and a long-time physicist at the U.S. Department of Energy's Brookhaven National Lab, is celebrating his 100th birthday today.

Together with Stanley Livingston and Hartland Snyder, Courant invented and developed the strong focusing principle incorporated into the vast majority of present-day particle accelerators. This principle allowed accelerators to reach significantly higher energies without the need for continually increasing their size. It provides the basis for the design of all of today’s high energy particle colliders, including Brookhaven’s Relativistic Heavy Ion Collider (RHIC) and Europe’s Large Hadron Collider, as well as the National Synchrotron Light Source II (NSLS-II) and all other synchrotron light sources around the world.

In 1948, Courant joined the newly formed Lab as a member of the team assembling Brookhaven’s first accelerator, a proton synchrotron called the Cosmotron. It was the first machine to send particles to the billion-electron volt, or GeV, region. In 1952, the Cosmotron reached the world record of 1.3 GeV—almost five times more energy than had been achieved prior to that time. The design particularly interested a team of European physicists who wanted to build a similar, but larger, machine at Europe’s CERN laboratory. The Europeans formed a study group with the Brookhaven physicists to figure out how it could be done. 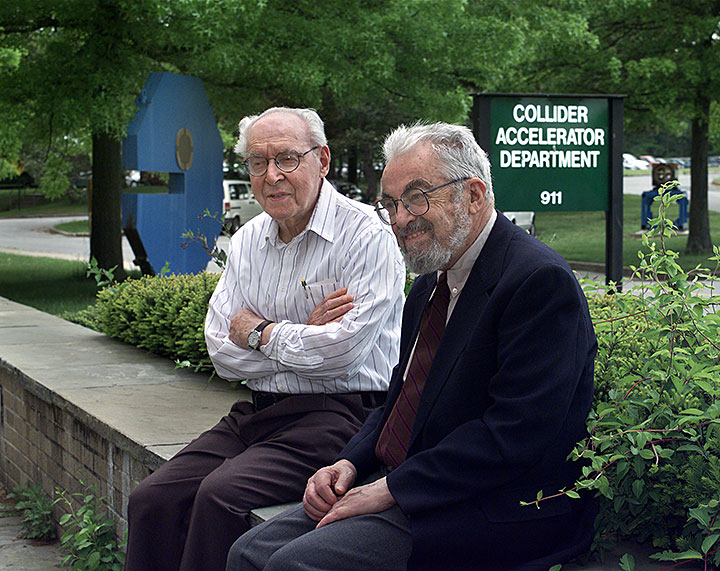 Ernest Courant (right) with Maurice Goldhaber in 2000 in front of the C-shaped Cosmotron magnet that sits outside Building 911, home to Brookhaven Lab's Collider-Accelerator Department.

In considering modifications to the Cosmotron's design for the accelerator at CERN, Courant discovered that alternating the focusing gradient of the accelerator’s magnets could increase beam stability and allow for a much smaller aperture of the bending magnets. Courant, Livingston, and Snyder quickly published a design for a 30-GeV accelerator, which was the basis for Brookhaven’s Alternating Gradient Synchrotron (AGS), CERN’s Proton Synchrotron, and numerous other accelerators around the world. Courant continued to make important contributions while incorporating the strong-focusing principle into the design of RHIC.

Courant also developed the foundations of how to calculate and analyze the beam dynamics and stability in strong focusing synchrotrons such as Brookhaven’s original National Synchrotron Light Source (NSLS). Those parameters, commonly referred to as “Courant-Snyder” parameters, have guided the design of every synchrotron light source since. Later on, Courant’s major contributions to the field of polarized beam acceleration, in collaboration with Roser and many others at Brookhaven, helped to push the development of polarization capabilities at RHIC for the study of proton spin.

“Little did I know when I joined Brookhaven back in 1948 that accelerator physics would be my whole career,” Courant said at the 2010 RHIC/AGS Users’ Meeting, where his 90th birthday was celebrated.

Courant was elected to the National Academy of Sciences, one of the greatest honors for an American scientist, in 1976. In 1986, he along with Stanley Livingston was awarded the Enrico Fermi Award, a Presidential-level award that is one of the oldest and most prestigious science and technology honors bestowed by the U.S. Government. Today, Courant resides with his wife in Ann Arbor, Michigan.

RHIC and NSLS-II are both DOE Office of Science user facilities.