For decades, this chemist has grappled with consequential particles in the atmosphere 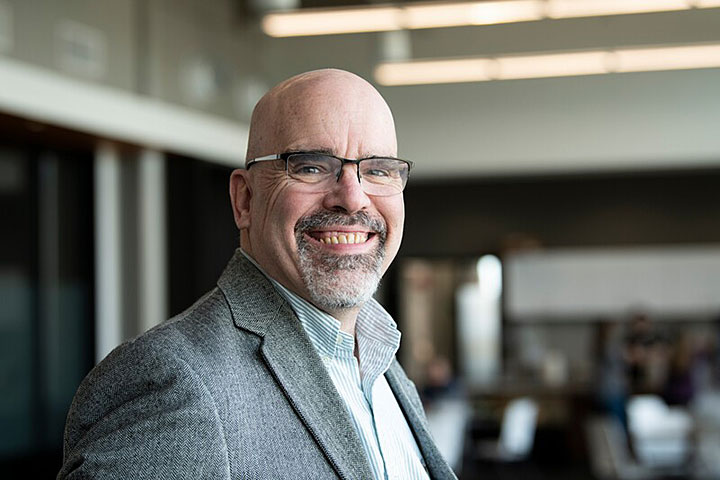 He is a self-described measurer of all things very small.

Over the past 25 years, those very small things have predominantly been aerosols. In the atmosphere, they range from a few nanometers to a micrometer wide.

A bundle of 100 micrometers, laid side by side, equals the width of a single human hair. But in the realm of atmospheric particles, a micrometer is gargantuan.

Aerosols are tiny particles suspended in the air as either a liquid or solid. They play an important role in scattering and absorbing solar radiation and are needed to form clouds. In sum, tiny aerosols play a big role in determining Earth’s climate.

In person, Springston imparts a few impressions. Rangy. Tall. Glasses. Shiny dome. (“I had hair once,” he points out.) Loves fieldwork. He says it’s exciting because of the data and for the chance to be a science ambassador?sometimes abroad.

At conferences, Springston is always first with a question, delivered in his signature deep and slow voice. He is crazy for chemistry and atmospheric instruments mounted in and on airplanes. At home, he has two dogs that yap.

Oh, and for someone who thinks so much about clouds and precipitation, Springston has a sunny outlook.

“We get to work in something that is a benefit to really important decisions,” he says of the atmospheric science community and how it can inform policy. “The people who work on climate change view it as the premier problem of our age. What better way to spend a working career?”

Getting to ARM and AOS

Aerosols affect the climate in a variety of complex ways that we are still trying to understand and model.

Springston started at BNL on May 30, 1986. That was on the cusp of a golden age of earth systems measurement, signaled in part by the founding of the Atmospheric Radiation Measurement (ARM) user facility at the U.S. Department of Energy (DOE).

He was the senior author on a December 2019 paper that outlined the evolution of ARM’s Aerosol Observing Systems (AOS) from 1996 to the present. The new-generation AOS built at BNL feature shock-mounted racks. The instruments are pre-wired and plumbed for ease of transportation and setup in the field.

Springston has been ARM’s AOS instrument mentor?designated expert and manager?for a decade.

“Aerosols affect the climate in a variety of complex ways that we are still trying to understand and model,” says Springston.

Along with the community of atmospheric scientists he calls “a family,” Springston is trying to take data from the world of observations to the world of models that are needed to predict pictures of future climate states.

Every drop in a cloud has an aerosol particle at its center. Those particles have multiple origins, grow and age through different phases, and differ in brightness, mass, weight, shape, fall rate, and lifespans.

Each particle is as different as snowflakes are, “and the computers can’t handle that,” says Springston. “We understand these particles and their processes empirically. But being able to model them on a global scale is so challenging.” 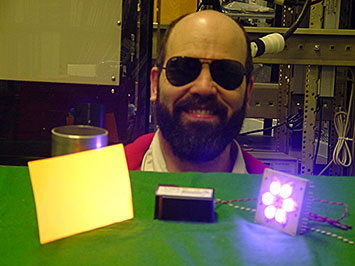 In this April 2005 snap, Springston poses with a nitrogen dioxide converter. Photo is courtesy of Springston.

Springston got his start as a chemistry graduate student fascinated with measuring quantities at the nanogram level.

His dissertation at Indiana University (PhD, 1984) explored a new form of capillary supercritical fluid chromatography. Broadly, chromatography is a longtime laboratory technique used to separate the chemical constituents of a liquid or gas.

His advisor was chemist Milos Novotny, whose work led to discovering the first mammalian pheromones.

During his doctoral research, Springston grappled with what he calls a “fourth state of matter” beyond solids, gases, and liquids. It involved designing, making, and testing a Slinky-like capillary system 100 meters (328 feet) long.

Made of tubes the width of a human hair, the system was subjected to high pressures in the range of 100 atmospheres. (The mean sea-level pressure on Earth is 1 atmosphere.)

“We made almost all of our instruments,” he says of those graduate student years, which renewed a fascination with directed tinkering?the “puzzles and problems” that Springston remembers from his boyhood.

Born near Washington, D.C., Springston started elementary school in Stillwater, Oklahoma, when his father, William, was a graduate student at Oklahoma State University. (He went on to teach shop, and later became a guidance counselor.)

At age 8, Springston witnessed three tornadoes line up on the horizon, ready to tear into the surface.

“Man,” he remembers thinking, “I would like to study that. Just seeing these cones dangling down. That was impressive.”

The Oklahoma era was the beginning of a boyhood with three younger siblings that involved living in college settings. 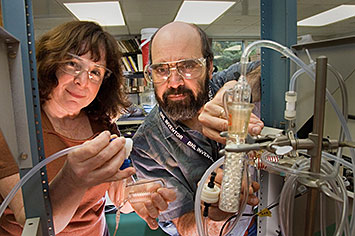 In 2007, Springston (right) shared a patent with BNL colleague Judy Lloyd (left) for a device that measures precursor chemicals in ozone formation. Photo is courtesy of BNL.

Springston did most of his growing up in rural Harrisonburg, Virginia, the home of James Madison University. He knew professors from church, through his parents (both were schoolteachers), and eventually just by hanging out on campus, where he would slip into lectures as a middle schooler.

A Streak of Luck

In 1975, Springston signed on as a chemistry major at Virginia Polytechnic Institute and State University (B.S., 1978). College was the beginning of what he called a career-long streak of luck in finding mentors.

In Springston’s freshman year in college, Professor Luther K. Brice Jr. gave him and a few others free run of the chemistry lab for two years of independent study. (In high school, Springston took two years of college-level chemistry.)

Another professor, who taught physical chemistry, gave out his home phone number to a class of 40 students.

Then there was Novotny at Indiana, whose tutelage led to Springston’s first patent. He has four now, including one from 2007 on a device for measuring chemicals that play a major role in forming ground-level ozone, a component of photochemical smog.

When Springston joined BNL in 1986, he found another mentor: aerosols veteran Peter H. Daum (now a scientist emeritus), who was then in charge of the laboratory’s since-discontinued research aircraft program.

“I was very lucky. The right people were there at the right time,” he says of his professional mentors. “I’ve tried to give some of that back, but I don’t think I’ll ever get the balance sheet positive.” 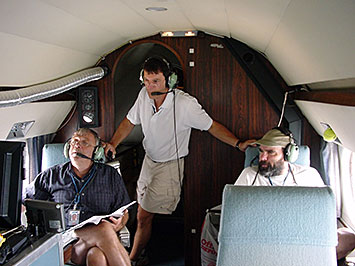 In this 2006 photo, Springston (right) is aboard ARM's Gulfstream-159 research aircraft. His BNL mentor Peter Daum is on the left. In the middle is John Hubbe, a now-retired scientist at PNNL. Photo is courtesy of Springston.

Springston arrived at BNL after a two-year stint as a postdoctoral researcher at the University of Utah.

He soon took his first research flight and now has 500 to 1,000 hours in the air. Each one of those hours, he estimates, requires three hours of prep and after-action work.

In the last decades, Springston has racked up a lot of travel time on ARM field campaigns. Doing fieldwork is an activity he recommends to any scientist studying the processes that go into weather and climate, even a modeler.

“Being there, and watching the flickering lights and hearing the whirs,” says Springston. “You get insights into the scientific phenomena, or more often into the instruments, that you just can’t glean from someone else’s notes.”

Springston is a veteran of ARM field campaigns in Alaska, Oklahoma, the Azores, South America, and Mexico. (Mexico City was the site of MILAGRO, the 2006 Megacity Initiative: Local and Global Research Observations field campaign, in which ARM had a part.)

In 2018, he helped set up the main observatory for an ARM field campaign in Argentina called Cloud, Aerosol, and Complex Terrain Interactions (CACTI). Its mission was to observe how large thunderstorms are born, grow, and evolve.

The kind of intense effort that fieldwork requires builds a community, he says. “Everybody shares. There are no secret projects.”

By 2008, DOE funding opportunities made it possible to expand the aerosol measurement capacity at ARM and elsewhere. About that time, BNL was charged with designing and instrumenting AOS packages that could be contained in ARM’s growing portfolio of mobile observatories.

We measure a number of phenomena that are directly related to atmospheric models. We’re trying to get a fundamental, process-level understanding of what goes into the atmosphere.

“That’s when I started really big with ARM,” he says.

About 10 years ago, ARM entered an era of enhanced aerosol measurement hardware, including gear for mass spectrometry, particle size distribution, a wider palette of trace gases, and hygroscopicity?the way aerosols take up water that changes their mass, fall rate, and light-scattering properties.

“We measure a number of phenomena that are directly related to atmospheric models,” says Springston. “We’re trying to get a fundamental, process-level understanding of what goes into the atmosphere.”

Springston has a knack for furniture-making, an expression of the urge for order and precision. He also makes three-dimensional (3D) puzzles out of wood.

Two older daughters are out into the world. One is a geologist doing research and stream surveys in upstate New York. Another works in the drama department at the Julliard School.

A stepson in college is studying microbiology, with an eye on medical school. A younger stepdaughter, in college too, is studying international relations.

His wife, Beth, is a fifth-grade teacher. That gives her “a unique perspective in dealing with her husband,” says Springston. “I never grew up.”