UPTON, NY - Scientists at the U.S. Department of Energy's Brookhaven National Laboratory have developed a new tool for quantitatively measuring elusive atmospheric chemicals that play a key role in the formation of photochemical smog. Better measurements will improve scientists' understanding of the mechanisms of smog formation and their ability to select and predict the effectiveness of various mitigation strategies. The Brookhaven scientists have been issued a U.S. patent for their apparatus, which is available for licensing.

The device measures atmospheric hydroperoxyl radicals - short-lived, highly reactive intermediates involved in the formation of ozone, a component of photochemical smog - in the lowest layer of Earth's atmosphere. The levels of these radicals can indicate which of a variety of chemical pathways is predominant in converting basic starting ingredients - hydrocarbons, nitrogen oxides, and water vapor - into smog in the presence of sunlight. 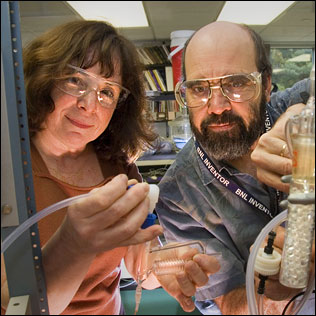 "Understanding the relative importance of the various pathways can help you tailor your mitigation strategies," said Brookhaven atmospheric chemist Stephen Springston, one of the inventors. "For example, are you better off spending your money reducing hydrocarbon emissions or nitrogen oxide emissions?"

"Our measurements will help predict which strategy would be most successful for a particular set of atmospheric conditions - and make modifications to the strategy as those conditions change," said co-inventor Judy Lloyd of the State University of New York at Old Westbury, who holds a guest appointment at Brookhaven Lab.

Because hydroperoxyl radicals are so reactive, getting accurate measurements is not easy. "These chemicals are so fragile you cannot take a bottle home with you," Springston said. "You have to measure them where they form, in the atmosphere, before they react and disappear."

Various groups have developed detectors for hydroperoxyl radicals, but these have been cumbersome and costly. The new device is comparatively small, lightweight, and inexpensive, has low power requirements, and gives a sensitive, fast response. It works by detecting a "glowing" signal from a chemiluminescent compound - similar to the compound that makes fireflies glow - when it reacts with the hydroperoxyl radicals in atmospheric samples fed into the device during flight.

"The chemiluminescence produced in solution creates a strong and readily detectable signal without the need for complex amplification procedures," said Lloyd.

The device has been tested in a mountaintop setting, but has not yet been deployed on an aircraft for a sampling mission. It is designed to be flown on atmospheric sampling aircraft, such as the Department of Energy's Gulfstream 1, which has been used by Brookhaven and other national laboratory scientists for a variety of atmospheric studies.

This work was funded by the Office of Biological and Environmental Research within the U.S. Department of Energy's Office of Science and by the National Science Foundation. For licensing information, please contact Dorene Price, (631) 344-4153, price@bnl.gov.