A Window of Opportunity

By Jerald Pinson, science writing intern in the Fermilab Office of Communication

In the late 2020s, Fermilab will begin sending the world’s most intense beam of neutrinos through Earth’s crust to detectors in South Dakota for the international Deep Underground Neutrino Experiment, or DUNE. When the new PIP-II particle accelerator comes online, an intense beam of protons will travel near the speed of light through a series of underground accelerator components before passing through metallic windows and colliding with a stationary target to produce the neutrinos. Researchers intend to construct the windows out of a titanium alloy and are testing the fatigue endurance of samples exposed to proton beams to see how well they will perform in the new accelerator complex.

When Fermilab scientists set out to produce neutrinos for DUNE, they have to be incredibly precise. The PIP-II accelerator will use superconducting structures and powerful magnets to accelerate rapid microsecond bursts of protons that are focused and steered in the right direction, aimed at the DUNE detectors in South Dakota, before they smash into the neutrino-producing target on the Fermilab site.

The target — which consists of graphite rods roughly 1.5 meters in total length — is separated from the rest of the accelerator in a vessel filled with helium to help keep temperatures down.

The protons, traveling at their maximum energy, enter the vessel through a window, then hit the bull’s eye to produce a cascade of rapidly decaying pions — short-lived subatomic particles — that exit through a second window in the back. In less than a second, the pions will not only have decayed into neutrinos, but those neutrinos — which have almost no mass and travel close to the speed of light — will have reached their destination in South Dakota, a journey of 800 miles. 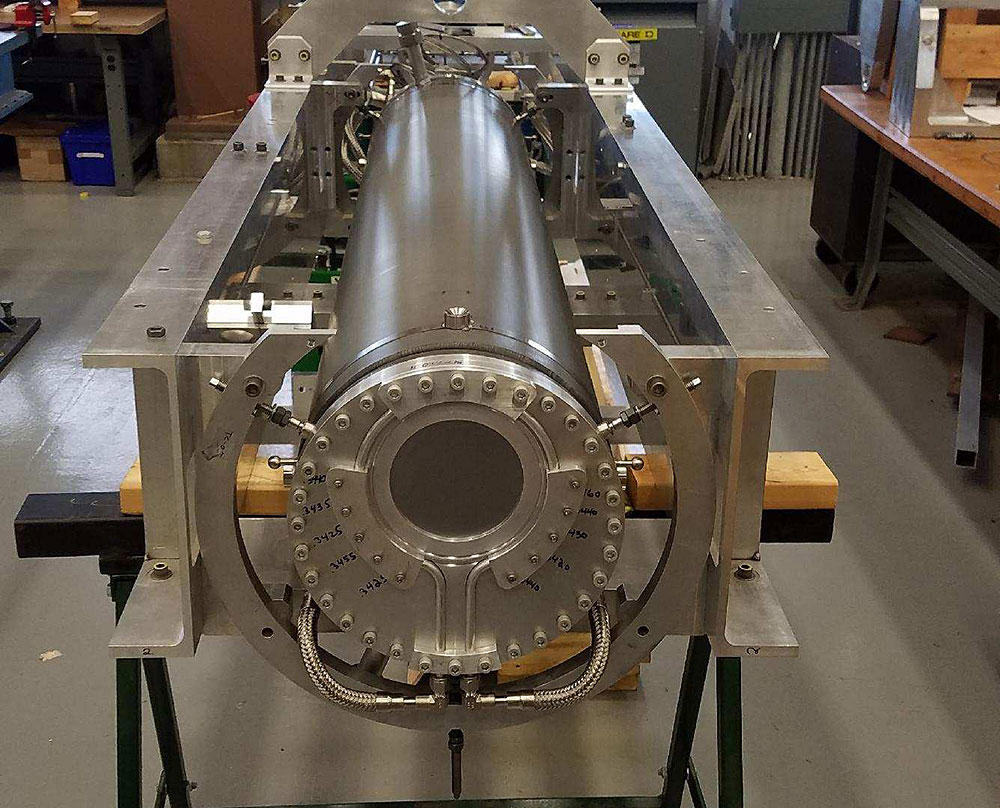 To create neutrinos, a beam of particles smashes into a target, which is contained in a chamber. The beam enters and exits the chamber (seen here on a carrier frame) through highly resilient metallic windows (the dark disk at the front of the chamber), which must be able to withstand a pummeling from the high-intensity beam. Fermilab researchers are currently testing a titanium alloy for these windows in preparation for an upcoming increase in beam intensity as part of the PIP-II program. Photo: Mike Stiemann

Designing the target array is no easy task, which is especially true of the windows. They need to have the stamina to withstand the high-power proton beam and temperatures in excess of 200 degrees Celsius, all while maintaining enough structural integrity to hold up against pressure differences across the window. Not only that, but they need to be made as thin as possible to minimize the interaction with the proton beam. Because of these extreme conditions, accelerator windows are made not of glass but of metal.

While metallic windows wouldn’t let much light into your home, they don’t pose much of a barrier to particle beams. Atoms are mostly made up of empty space, and high-energy protons travel through the interstices within and between the window’s atoms with relatively little interaction.

However, the beams passing through the windows are highly energetic, and the small fraction of protons that do rebound off nuclei in the windows deposit energy in the form of heat and vibrational waves, which pose the risk of rupturing the material and are a major source of concern for engineers and physicists.

“These windows have to be able to sustain the heat generated by the beam interaction,” said Fermilab postdoctoral research associate Sujit Bidhar.

All of this heating and cooling causes the beam windows to rapidly contract and expand.

“The target material expands within 10 microseconds,” Bidhar said. “But the surrounding material isn’t expanding, because it’s not directly interacting with the beam. This causes a kind of hammering effect, which we call stress waves.”

The waves inside the material are analogous to a person swimming in a pool; moving through the water creates similar waves that would spread out to the edge and ricochet back to their point of origin. If the swimmer were to add extra energy by doing a cannonball into the water, the wave would increase in amplitude and might spill over the side.

Since target windows in accelerators are solid, however, strong waves passing through them weaken the material over time through a process called fatigue, and instead of being able to splash over the side of a pool, the induced stress will eventually cause the array to break. It’s not a question of if, but when.

Predicting the next big break

Physicists have a vested interest in knowing exactly how long each accelerator component can be expected to last. Unexpected equipment failures can lead to long delays and setbacks.

Many particle accelerators use target windows made of beryllium, a rare type of lightweight metal that, up until now, has shown the best results thanks to its exceptional durability. But physicists and engineers are constantly looking for ways to innovate, and those developing target windows for DUNE are investigating titanium alloys, which may have properties that allow them to hold up better than their beryllium counterparts.

“Titanium has a high specific strength as well as a high resistance to fatigue stress and corrosion,” said Kavin Ammigan, a senior engineer at Fermilab. “We’re testing to see how these critical properties change when titanium is exposed to proton beams.”

Titanium alloys have been used at the Japan Proton Accelerator Research Complex – known as J-PARC — for over a decade with promising results. With Fermilab’s PIP-II upgrade, the laboratory accelerator complex will accelerate a much higher-intensity beam than it does currently. In order to predict how long titanium windows will last at Fermilab, researchers needed to test samples using similar beam energies. 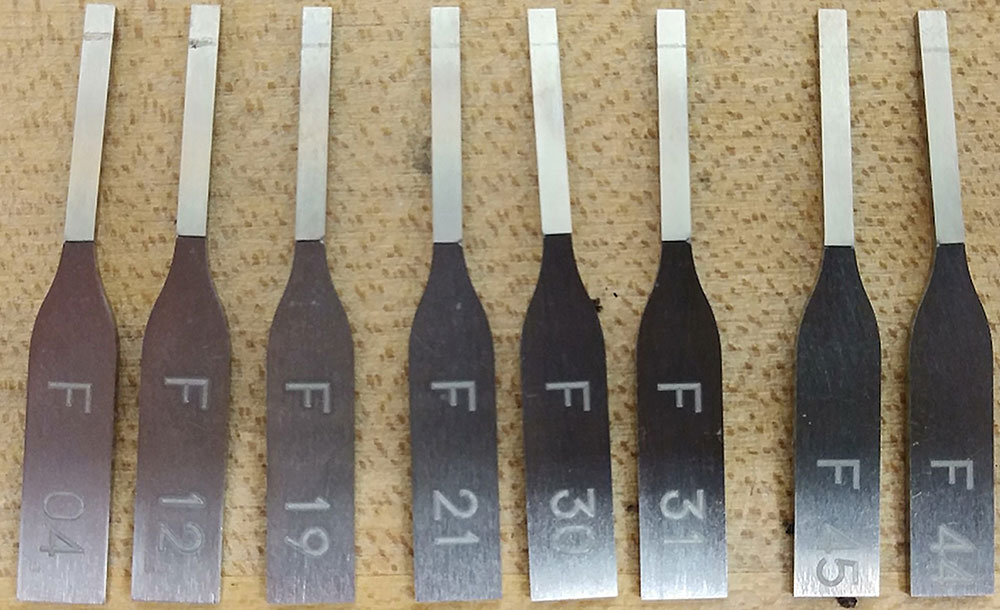 Small samples of titanium alloys were subjected to an intense proton beam at Brookhaven National Laboratory, after which they were tested for stress fatigue at Fermilab. Photo: Sujit Bidhar

Titanium fatigue samples provided by researchers at J-PARC were sent to Fermilab, where their mechanical properties were tested. The samples were then pummeled by an intense beam of protons at Brookhaven National Laboratory over the course of eight weeks, after which they were returned to Fermilab for another round of testing to determine exactly how the properties of the alloy had changed and degraded over time. By testing both before and after being bombarded by proton beams, researchers can roughly predict how long windows made out of titanium allows can be expected to last in the upgraded accelerator.

The data generated by the project will be useful not only for Fermilab and the PIP-II upgrade, but also for other institutions and future accelerators. The J-PARC accelerator facility, for example, has plans to increase the intensity of its particle beam and will be able to use the results from the current study to predict the lifespan of the titanium target window.

With this information in hand, Fermilab researchers will be able to proactively manage their beam devices. Titanium windows will be removed before the end of their projected life expectancies and replaced with fresh, unfatigued windows.

Ammigan, Bidhar and Fermilab colleagues have completed their first batch of titanium alloy sample measurements and plan to have a second batch completed in a few months’ time, after which they plan on publishing their results.

Particle accelerator research and construction at Fermilab is supported by the Department of Energy Office of Science.

Fermilab is supported by the Office of Science of the U.S. Department of Energy. The Office of Science is the single largest supporter of basic research in the physical sciences in the United States and is working to address some of the most pressing challenges of our time. For more information, visit science.energy.gov.