This news release, originally issued by the Massachusetts Institute of Technology, describes the first experimental evidence to explain the unusual electronic behavior behind the world’s thinnest superconductor. The work was led by an MIT professor and a physicist from the National Synchrotron Light Source II (NSLS-II), a U.S. Department of Energy (DOE) Office of Science user facility at DOE’s Brookhaven National Laboratory. The resulting insights could help guide the development of better superconductors. For more information on Brookhaven’s role in this research, please contact Cara Laasch, 631-344-8458, laasch@bnl.gov. 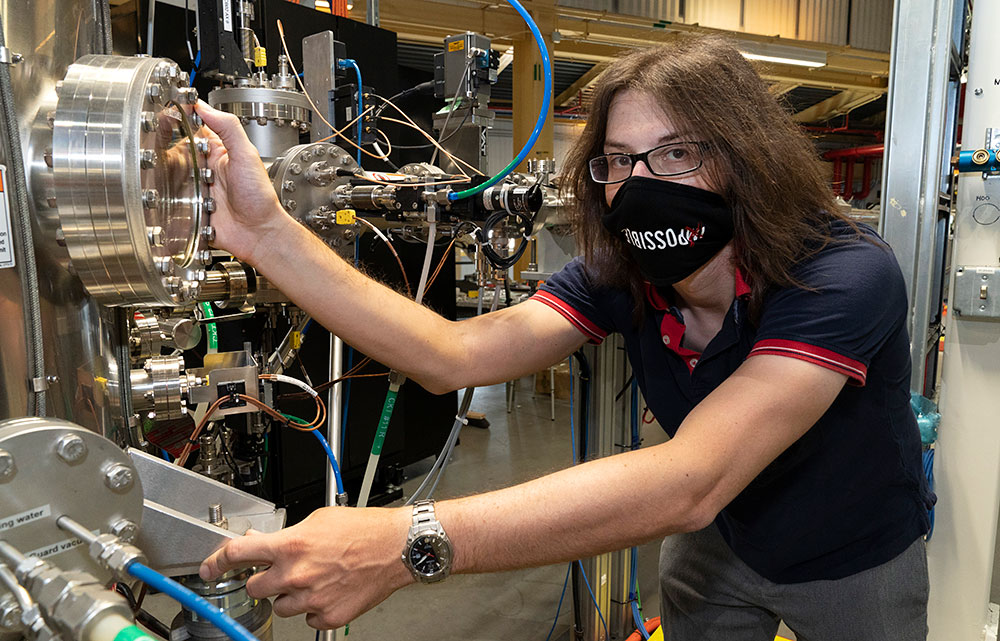 Jonathan Pelliciari, an assistant physicist at Brookhaven National Laboratory, with part of the resonant inelastic x-ray scattering (RIXS) instrument at BNL. Pelliciari is lead author of a study that used RIXS to uncover secrets of the world's thinnest superconductor. He was an MIT postdoctoral fellow when the work was conducted.

Physicists from across three continents report the first experimental evidence to explain the unusual electronic behavior behind the world’s thinnest superconductor, a material with myriad applications because it conducts electricity extremely efficiently. In this case the superconductor is only an atomic layer thick.

The work, led by an MIT professor and a physicist at Brookhaven National Laboratory, was possible thanks to new instrumentation available at only a few facilities in the world. The resulting data could help guide the development of better superconductors. These in turn could transform the fields of medical diagnostics, quantum computing, and energy transport, which all use superconductors.

These so-called high-temperature superconductors, however, are still not fully understood. “Their microscopic excitations and dynamics are essential to understanding superconductivity, yet after 30 years of research, many questions are still very much open,” says Riccardo Comin, the Class of 1947 Career Development Assistant Professor of Physics at MIT. The new work, which is reported in the May 25, 2021 issue of Nature Communications, helps answer those questions. 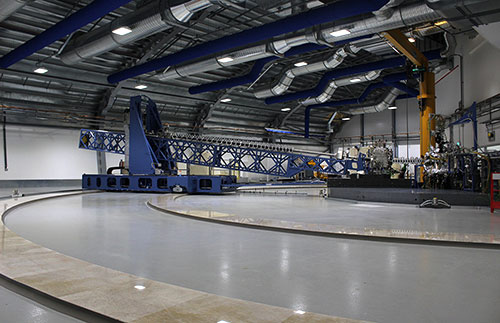 In 2015 scientists discovered a new kind of high-temperature superconductor: a sheet of iron selenide only one atomic layer thick capable of superconducting at 65 Kelvin. In contrast, bulk samples of the same material superconduct at a much lower temperature (8 Kelvin).  The discovery “sparked an investigative flurry to decode the secrets of the world’s thinnest superconductor,” says Comin, who is also affiliated with MIT’s Materials Research Laboratory.

In a regular metal, electrons behave much like individual people dancing in a room. In a superconducting metal, the electrons move in pairs, like couples at a dance. “And all these pairs are moving in unison, as if they were part of a quantum choreography, ultimately leading to a kind of electronic superfluid,” says Comin.

But what is the interaction, or “glue,” that holds these pairs of electrons together? Scientists have known for a long time that in conventional superconductors, that glue is derived from the motion of atoms within a material. “If you look at a solid sitting on a table, it doesn’t appear to be doing anything,” Comin says. However, “a lot is happening at the nanoscale. Inside that material electrons are flying by in all possible directions and the atoms are rattling; they’re vibrating.” In conventional superconductors, the electrons use the energy stored in that atomic motion to pair up.

The glue behind electrons’ pairing in high-temperature superconductors is different. Scientists have theorized that this glue is related to a property of electrons called spin (another, more familiar property of electrons is their charge). The spin can be thought of as an elementary magnet, says Pelliciari. The idea is that in a high-temperature superconductor, electrons can pick up some of the energy from these spins, known as spin excitations. And that energy is the glue they use to pair up.

Until now, most physicists thought that it would be impossible to detect or measure spin excitations in a material only an atomic layer thick. That is the remarkable achievement of the work reported in Nature Communications. Not only did the physicists detect spin excitations, but, among other things, they also showed that the spin dynamics in the ultra-thin sample were dramatically different from those in the bulk sample. Specifically, the energy of the fluctuating spins in the ultra-thin sample was much higher—by a factor of four or five—than the energy of the spins in the bulk sample.

“This is the first experimental evidence of the presence of spin excitations in an atomically thin material,” says Pelliciari. 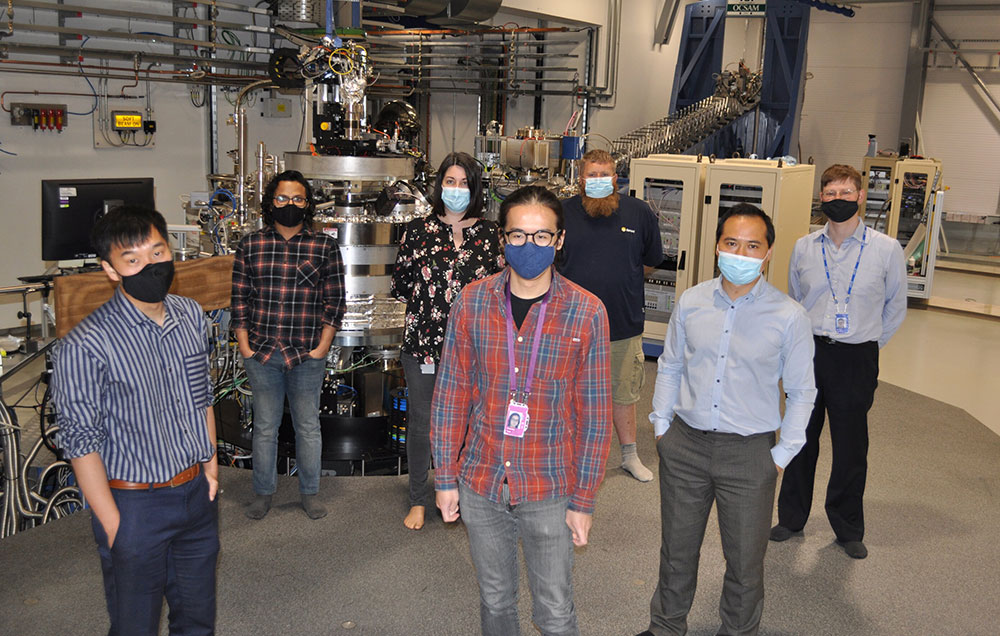 He and Comin discussed the potential for using RIXS to study the spin dynamics of the new ultra-thin superconductor, but Comin was initially skeptical. “I thought, ‘yes, it would be great if we could do this, but experimentally it’s going to be next to impossible,’” Comin remembers. “I thought it was a true moonshot.” As a result, “when Johnny collected the very first results, it was mind-blowing for me. I’d kept my expectations low, so when I saw the data, I jumped on my chair.”

Only a few facilities in the world have advanced RIXS instruments. One, located at Diamond Light Source (UK) and led by Dr. Zhou, is where the team conducted their experiment. Another one, which was still being built at the time of the experiment, is at Brookhaven National Laboratory. Pelliciari is now part of the team running the RIXS facility, known as the Beamline SIX, at the National Synchrotron Light Source II located at Brookhaven Lab.

“The impact of this work is two-fold,” says Dr. Thorsten Schmitt, head of the Spectroscopy of Novel Materials Group at the Paul Scherrer Institut in Switzerland. Schmitt was not involved in the work. “On the experimental side, it is an impressive demonstration of the sensitivity of RIXS to the spin excitations in a superconducting material only an atomic layer thick. Furthermore, the [resulting data] are expected to contribute to the understanding of the enhancement of the superconducting transition temperature in such thin superconductors.” In other words, the work could lead to even better superconductors.

“In this context, the work of Pelliciari et al. presents an enlightening, comparative study of bulk iron selenide and monolayer-thin iron selenide revealing a dramatic reconfiguration of the spin excitations.” Bisogni was not involved in the Pelliciari work.