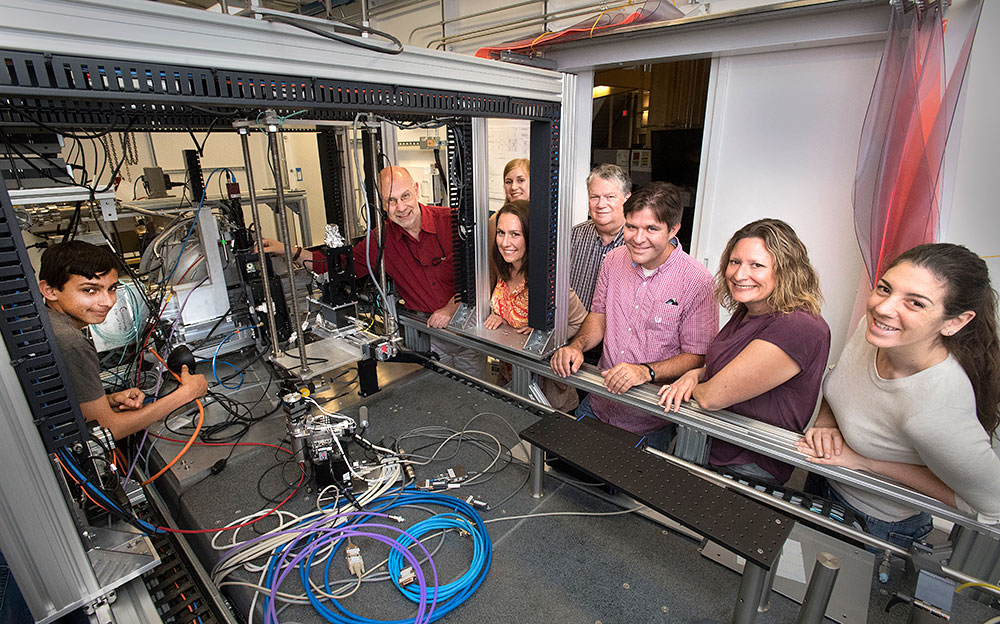 The team of students and teachers worked together with beamline scientist Juergen Thieme to measure the micrometeoroids at the Submicron Resolution X-ray Spectroscopy (SRX) beamline at the National Synchrotron Light Source II. (This photo was taken in 2019, when the measurements took place.)

A research group has used x-rays generated at the National Synchrotron Light Source II (NSLS-II), a U.S. Department of Energy (DOE) Office of Science user facility located at the DOE’s Brookhaven National Laboratory, to study tiny rock samples and positively identify them as extraterrestrial “micrometeorites.” These particles are integral to learning about extraterrestrial chemistry and also help explain the supply of certain elements in Earth’s geological systems.

The team is made up of students from high schools across Long Island, New York; university-based researchers; and scientists from Brookhaven Lab. The collaboration was made possible via Brookhaven’s Student Partnerships Advancing Research and Knowledge (SPARK) program, which provides opportunities for students and their teachers to become visiting researchers at the Laboratory. SPARK allows students to participate in real experiments outside of the classroom and gain hands-on experience in a team setting, giving them exposure to cutting-edge research tools and real-world science.

“This was the first SPARK-led project, which began years ago, and it is impressive how groups from various school districts worked together, leading to a peer-reviewed publication,” said Aleida Perez of Brookhaven’s Office of Educational Programs (OEP), who manages the SPARK program. “With support and guidance from NSLS-II and OEP staff, SPARK provided the students and their teachers with an authentic research experience.”

Maddie Esposito was a sophomore in high school when she participated in the study and is currently a student at Princeton University.

“Now, as a sophomore in college majoring in chemistry, I can articulate just how pivotal my involvement in the SPARK program was to my development as a scientist,” she said. “The thrill of being in a laboratory like the NSLS-II propelled me to further hone my data analysis, journal reading, and paper-writing skills. Learning about the various spectroscopic and diffraction techniques used throughout the project further stimulated my interest in chemistry. It was empowering to work alongside Brookhaven scientists, high school teachers, and other students as an equal.” 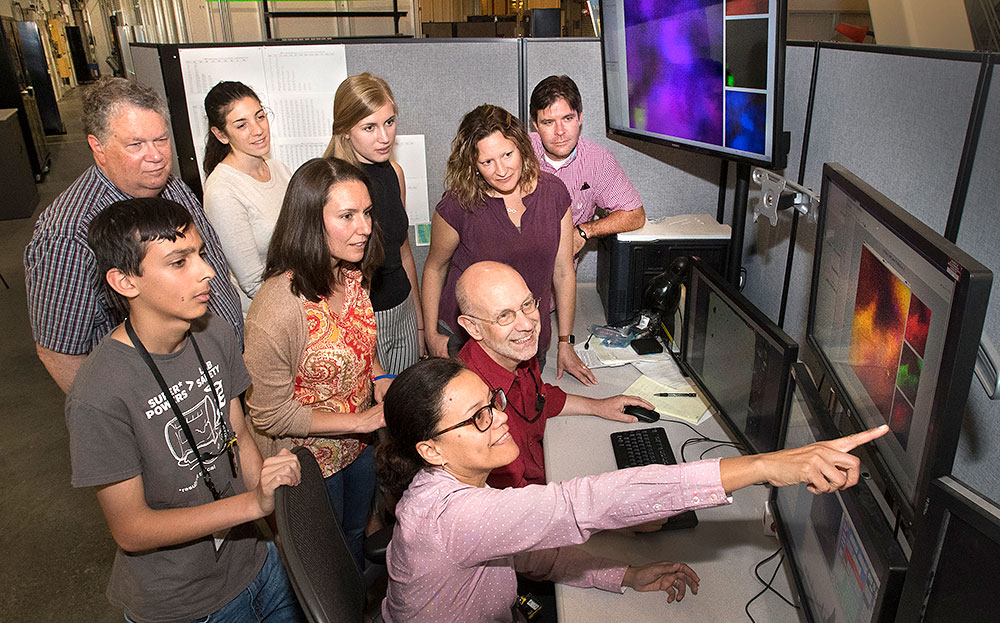 Together with Aleida Perez and Juergen Thieme, the group of students and teachers took a first look at their data. (This photo was taken in 2019, when the measurements took place.)

Micrometeorites (MMs) are abundant throughout the solar system and account for most of the extraterrestrial matter that ends up on Earth. They can be as large as 3 millimeters in diameter but are most commonly about 250 micrometers (millionths of a meter) in size (in comparison, a human hair is roughly 100 micrometers in diameter). MMs can be found and collected in locations all over Earth, including places that are relatively easy for collection purposes, such as urban and suburban environments. Their ubiquitous nature makes this project ideal for student participation.

For this study, samples were conveniently collected on five high school rooftops using two-gallon buckets, which were placed on the roofs for a two-week period and left to collect precipitation, dust, and possible MM samples. This process was repeated three times to ensure a robust number of samples. Collection occurred during late winter and early spring to minimize the presence of pollen, spores, and other natural terrestrial particulates.

“Micrometeorites are like regular meteorites, but much, much smaller—so small that most of us don't even know they exist, even though they are falling all around us,” said Kevin Souhrada, another student who participated and is now studying at Cornell University. “We used the NSLS-II to confirm the particles' extraterrestrial origins and to build a repertoire of x-ray tools and techniques that could be used to classify the particles. Working in a world-class laboratory such as NSLS-II and producing a peer-reviewed article detailing our work was a tremendous opportunity, especially as a high schooler. The work that I conducted at Brookhaven has greatly helped me in my current research at the university level.”

MMs are classified according to a system that was developed in 2008. They are first sorted into one of three types: melted, unmelted, and partially melted. This work deals with the melted variety, which are known as cosmic spherules (CSs) due to the spherical shape they take after melting within the atmosphere as they pass through it. CSs are further broken down into iron-rich (I-type), glassy with magnetite (G-type), or silicate (S-type), with S-type being the most common by far.

The collected matter was filtered and processed to select spherical or nearly-spherical particles with diameters of about 100 micrometers and glossy surfaces, consistent with I-type and G-type CSs. These samples were then analyzed at NSLS-II, a DOE Scientific User Facility, using non-destructive x-ray techniques at three beamlines: the Submicron Resolution X-ray Spectroscopy (SRX) beamline, the Tender Energy X-ray Absorption Spectroscopy (TES) beamline, and the X-ray Fluorescence Microprobe (XFM) beamline.

No single method is sufficient to yield enough information to identify the particles as likely originating from Earth or beyond. However, together, these three techniques allowed the team to gather comprehensive information on the samples’ elemental and mineral compositions. Synchrotron microdiffraction at the XFM beamline was used to identify certain minerals; particularly, pentlandite and forsterite, which tend to be found in samples of extraterrestrial origin. X-ray absorption near-edge structure (XANES), performed at the TES beamline, reveals how certain elements are “speciated,” meaning what compounds they are a part of. And at the SRX beamline, x-ray fluorescence at different energies enables the researchers to observe how key elements — including iron, nickel, and sulfur — are distributed within the samples.

“Synchrotron analysis gives us ideal tools to analyze extraterrestrial materials, from micrometeorites to samples retrieved from asteroids and — someday — Mars,” said Stony Brook University research assistant professor Paul Northrup, who was involved with the work. “And working with high school students opens new possibilities for them, to see what a career in science would be like.”

There are other advantages of using synchrotron-based methods, such as being able to prepare samples non-destructively and gathering information on composition below the surface of the sample. Used collectively, all of these approaches can provide the best outcome for studies of micrometeorites and complement traditional laboratory-based instruments like scanning electron microscopy (SEM).

The results of this study are published in the July 16, 2020, edition of Geosciences. Read the full paper here.