The following news release was originally issued by the Massachusetts Institute of Technology. A team of researchers have come up with a way to improve solid-state battery performance by eliminating any carbon dioxide during a critical manufacturing step. To understand the complex chemistry that occurs during the manufacturing process, the researchers collaborated with staff at the In situ and Operando Soft X-ray Spectroscopy (IOS) beamline at the National Synchrotron Light Source II (NSLS-II). NSLS-II is a U.S. Department of Energy (DOE) Office of Science user facility at DOE’s Brookhaven National Laboratory. For more information on Brookhaven’s role in this research, contact Cara Laasch (laasch@bnl.gov, 631-344-8458).

Toward Batteries That Pack Twice as Much Energy per Pound

A method for stabilizing the interfaces in solid-state lithium-ion batteries opens new possibilities. 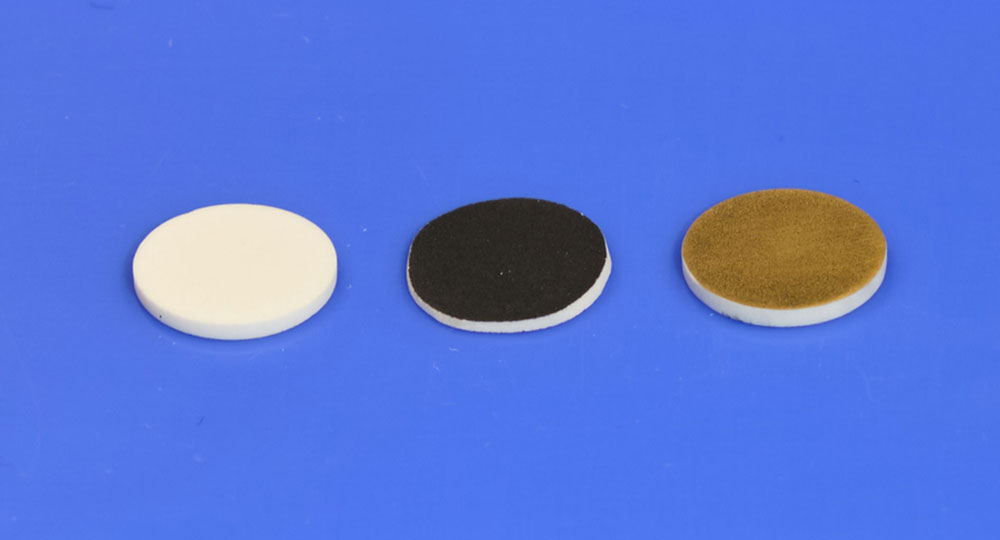 These discs were used for testing the researchers' processing method for solid-electrolyte batteries. On the left, a sample of the solid electrolyte itself, a material known as LLZO. At center, the same material coated with the cathode material used in their tests. At right, the LLZO material with a coating of gold, used to facilitate measuring its electrical properties. Credits:Photo: Pjotrs Žguns

In the endless quest to pack more energy into batteries without increasing their weight or volume, one especially promising technology is the solid-state battery. In these batteries, the usual liquid electrolyte that carries charges back and forth between the electrodes is replaced with a solid electrolyte layer. Such batteries could potentially not only deliver twice as much energy for their size, they also could virtually eliminate the fire hazard associated with today’s lithium-ion batteries.

But one thing has held back solid-state batteries: Instabilities at the boundary between the solid electrolyte layer and the two electrodes on either side can dramatically shorten the lifetime of such batteries. Some studies have used special coatings to improve the bonding between the layers, but this adds the expense of extra coating steps in the fabrication process. Now, a team of researchers at MIT and Brookhaven National Laboratory have come up with a way of achieving results that equal or surpass the durability of the coated surfaces, but with no need for any coatings.

The new method simply requires eliminating any carbon dioxide present during a critical manufacturing step, called sintering, where the battery materials are heated to create bonding between the cathode and electrolyte layers, which are made of ceramic compounds. Even though the amount of carbon dioxide present is vanishingly small in air, measured in parts per million, its effects turn out to be dramatic and detrimental. Carrying out the sintering step in pure oxygen creates bonds that match the performance of the best coated surfaces, without that extra cost of the coating, the researchers say.

“Solid-state batteries have been desirable for different reasons for a long time,” Yildiz says. “The key motivating points for solid batteries are they are safer and have higher energy density,” but they have been held back from large scale commercialization by two factors, she says: the lower conductivity of the solid electrolyte, and the interface instability issues.

The conductivity issue has been effectively tackled, and reasonably high-conductivity materials have already been demonstrated, according to Yildiz. But overcoming the instabilities that arise at the interface has been far more challenging. These instabilities can occur during both the manufacturing and the electrochemical operation of such batteries, but for now the researchers have focused on the manufacturing, and specifically the sintering process.

Sintering is needed because if the ceramic layers are simply pressed onto each other, the contact between them is far from ideal, there are far too many gaps, and the electrical resistance across the interface is high. Sintering, which is usually done at temperatures of 1,000 degrees Celsius or above for ceramic materials, causes atoms from each material to migrate into the other to form bonds. The team’s experiments showed that at temperatures anywhere above a few hundred degrees, detrimental reactions take place that increase the resistance at the interface — but only if carbon dioxide is present, even in tiny amounts. They demonstrated that avoiding carbon dioxide, and in particular maintaining a pure oxygen atmosphere during sintering, could create very good bonding at temperatures up to 700 degrees, with none of the detrimental compounds formed.

The performance of the cathode-electrolyte interface made using this method, Yildiz says, was “comparable to the best interface resistances we have seen in the literature,” but those were all achieved using the extra step of applying coatings. “We are finding that you can avoid that additional fabrication step, which is typically expensive.”

The potential gains in energy density that solid-state batteries provide comes from the fact that they enable the use of pure lithium metal as one of the electrodes, which is much lighter than the currently used electrodes made of lithium-infused graphite.

The team is now studying the next part of the performance of such batteries, which is how these bonds hold up over the long run during battery cycling. Meanwhile, the new findings could potentially be applied rapidly to battery production, she says. “What we are proposing is a relatively simple process in the fabrication of the cells. It doesn't add much energy penalty to the fabrication. So, we believe that it can be adopted relatively easily into the fabrication process,” and the added costs, they have calculated, should be negligible.

Large companies such as Toyota are already at work commercializing early versions of solid-state lithium-ion batteries, and these new findings could quickly help such companies improve the economics and durability of the technology.