Note: Brookhaven Lab staff and retirees are invited to attend this Brookhaven Lecture in person in the Large Seminar Room in Physics (Bldg. 510)—not Berkner Hall. All are welcome to participate virtually on Zoom. 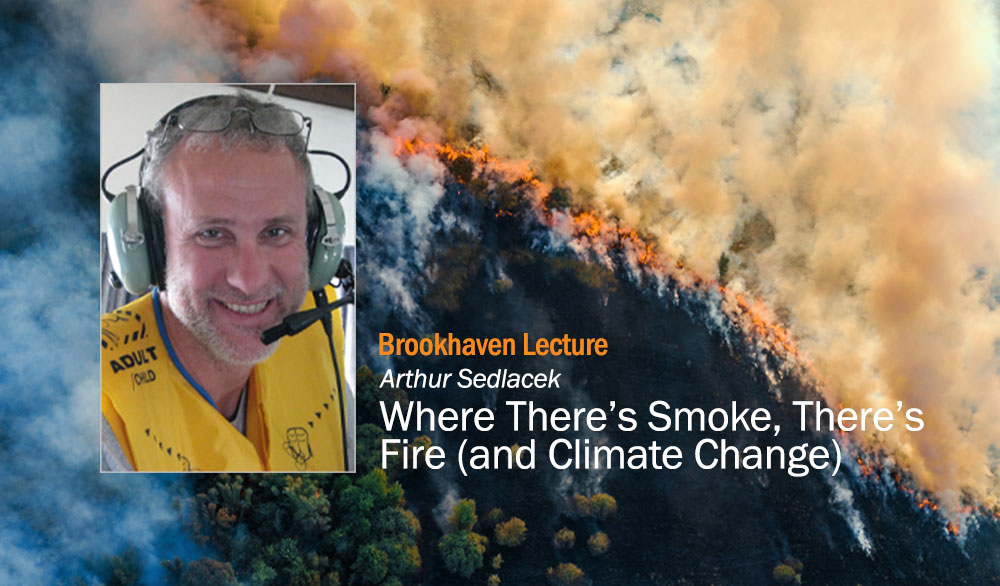 Evidence of climate change is easier to see than ever before. Hurricanes, flooding, droughts, and wildfires are just some of the symptoms.

Tiny particles in the atmosphere, called aerosols, contribute to the Earth's changing climate. Aerosols primarily serve as climate-cooling agents, as they reflect energy "pouring down" from the sun back out to space. Some aerosols are created from the combustion of fossil fuels while others occur naturally, for example, from sea spray and wildfires.

A better understanding how aerosols evolve in the atmosphere is vital to more accurately model how our climate is changing. Improvements in scientists' ability to forecast climate change through modeling is critically important to communicate what changes may mean for people, and, potentially, to develop ways to mitigate the negative effects.

On Wednesday, April 20, join Arthur Sedlacek of the U.S. Department of Energy's (DOE) Brookhaven National Laboratory for the Earth Day-themed 526th Brookhaven Lecture. His talk, titled "Where There's Smoke, There's Fire (and Climate Change)," will be held at 4 p.m.

Lab staff and retirees are invited to attend in person in the Large Seminar Room in Physics (Bldg. 510)—not Berkner Hall, where Brookhaven Lectures were typically held. Refreshments will be available at 3:30 p.m.

All are welcome to participate virtually on Zoom. Join the Zoom Meeting

During his talk, Sedlacek will give a brief overview of climate change and then focus on aerosols produced in wildfires, discussing observations and findings from in-field research campaigns. He will highlight the complex evolution that these aerosols undergo as they age in the atmosphere, thereby providing important insights that can improve their representation in climate change forecasts.

In addition to this Brookhaven Lecture, Sedlacek will give a similar, family friendly talk at the Jones Beach Energy & Nature Center on Friday, April 22. This is part of a free Earth Day event, offered through a collaboration with Brookhaven Lab and the Long Island Power Authority. Learn more.

Arthur Sedlacek is an atmospheric chemist and co-leader of the Aerosol Group in Brookhaven Lab's Environmental & Climate Sciences Department. He has authored or coauthored 90 publications, which have been cited nearly 2,800 times.

Sedlacek is a member of the User Executive Committee for the DOE's Atmospheric Radiation Measurement (ARM) Research Facility. He is also a member of the American Geophysical Union and a longtime mentor for early career researchers in the field.

Sedlacek joined Brookhaven as a postdoc in 1992 and became an assistant scientist in the National Security and Nonproliferation Division that same year. He has risen through the ranks and moved to the Atmospheric Sciences Division in 2004. Sedlacek presented the 337th Brookhaven Lecture, titled "LIDAR: Chemical Analysis from Afar," in 1998.