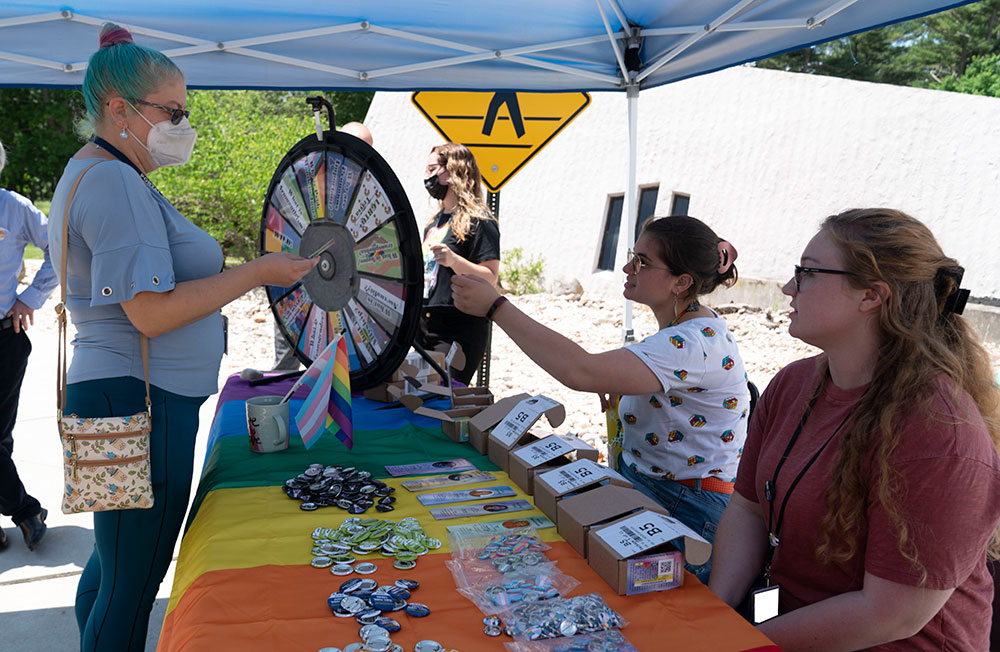 “I spoke with Debbie Bauer, the group’s president, and she agreed, the name was pretty exclusive,” recalled Theresa Grimaldi, Vice President of Pride Alliance and Operator in Brookhaven National Laboratory’s Medical Isotope Group. “We tried brainstorming some names using the LGBTQ+ (lesbian, gay, bisexual, transgender and queer or questioning) acronym, but realized that several members are allies, so the word ‘alliance’ stuck. We’re an alliance of people that are proud of living their own open and honest lives.”

Accurate and inclusive language is an easy way to express support and build a sense of community. Sometimes finding the right terminology can be challenging, given that meaning can shift and change along with time and cultural attitudes, but asking for guidance, especially in the case of something as personal as pronouns, for example, will always steer you in the right direction.

“I will use the words like gay, queer, and LGBTQ+ interchangeably,” Grimaldi explained, “I like the word queer because it covers so much ground. There is a gender spectrum. There is a sexuality spectrum. Everybody falls somewhere on those spectrums, whether you're at one particular end or somewhere in between.”

Once a hurtful slur, ‘queer’ has been reclaimed and redefined as an umbrella term that encompasses every letter in the LGBTQ+ acronym and any grey areas in between. Though its use can still be a bit controversial, it’s a helpful label for those that are still exploring their identities and orientations and aren’t quite sure where they fall.

One of the bigger goals of Pride Alliance is to make people aware of its presence as a safe space and a unified resource. “We’ve got to bring the group out of the closet. We need branding. We need a goal,” said Grimaldi. “I came to Brookhaven fresh out of college with my rose-colored glasses on, ready to be gay at work – soon realizing that not everyone has that same privilege. But I didn't want to have to pack up my gayness and leave it in my car before I walked into my office. I want to bring the community to light and combat closet culture. Gender and sexual minorities are an invisible minority. You can't just look at somebody and instantly know. I would never push anybody to come out, that is never something you do, but we want to show queer employees, even people still closeted, that you're safe with us.”

Employee resource groups are an excellent place for allies to show their support and help work towards a more inclusive culture but extending that allyship to their personal working groups and communities can make such a positive impact in making their colleagues and peers comfortable. “We actually had somebody come and join the Pride Alliance, but then they were afraid that their work group would find out, so they ended up leaving, which is unfortunate,” said Grimaldi. “I’m lucky to have a very diverse work group that is inclusive and affirming. They're not afraid to ask questions and those questions end up being really great conversations. The Lab is making progress, though. It's really encouraging to see that people are adding their pronouns to their signatures, for example. It’s a small gesture that goes a long way.”

Allyship can come in many different forms, and the easiest place to start is through education. Whether its listening to the direct experiences and perspectives of LGTBQ+ colleagues or exploring resources from trusted sources, having that understanding is crucial.

“I always try to stress the importance of allies, especially now that we have an ally on our board to show people that you don't have to be gay to be part of the group,” Grimaldi explained. “People at the Lab who are trying to be better allies often express that they aren’t sure how to do that. They want to know what it looks like. Does that mean they have to go to the parade or wear a rainbow pin? No. It can be attending a talk or an external training, like LGBTQ 101, listening to speakers in the field, queer people in STEM, talking to us at our table at events.”

Curating and hosting these events takes a lot of effort, but the results make all of the time and energy worthwhile. They are often well attended and spark thoughtful discussions that challenge initial perspectives and create a more welcoming environment. That momentum also increases membership. These events increase awareness and present a clear set of goals that potential new members can contribute to.

“It’s all volunteer work,” said Grimaldi. “We have our jobs here at the lab, I'm a chemist and I have my chemistry stuff to do, and it was hard when there were so few of us early on. When I joined, there were only about four people in the group, and now there are so many more, which is wonderful. It’s a great mix of queer people and allies. With the group expanding, we have more hands to help, we're able to get things like branding and a budget for educational materials and lectures.”

On top of creating a growing safe space and educating the wider Laboratory community, the group provides resources and advocates for LGBTQ+ staff. From being a voice for marriage equality to, more recently, getting health insurance coverage of gender-affirming surgery, the Pride Alliance works tirelessly for equity and inclusion. Their efforts help to make the Laboratory a safe, supportive, welcoming space for all employees, celebrating our unique differences and emphasizing the core things that we all have in common.