Since 1972, the Brookhaven Linac Isotope Producer (BLIP) has supplied the nation with critical isotopes for use in medicine, research, and other applications 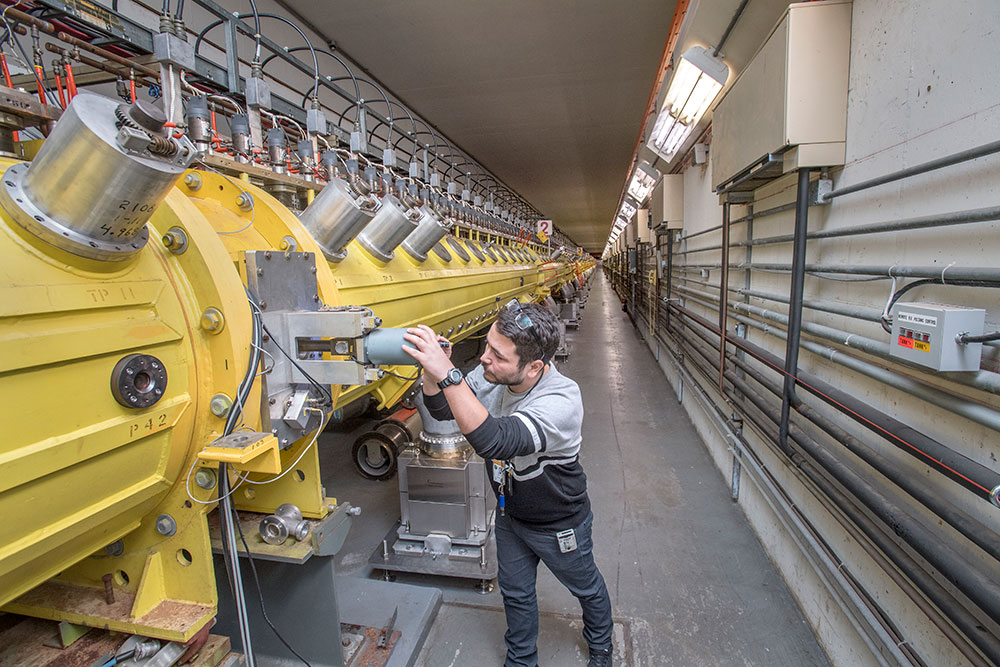 Fifty years ago, in 1972, the Brookhaven Linac Isotope Producer (BLIP) began operation. It was the world’s first facility to use high-energy particle beams to produce radioisotopes that are rare, new, or commercially unavailable. Since then, BLIP’s isotopes have been used for a variety of purposes—chief among them, the diagnosis and treatment of disease.

Some of BLIP’s radioisotopes—forms of chemical elements with excess atomic energy—can make cancerous tumors “light up,” allowing doctors to find and track them using medical scans. Other radioisotopes can deliver their energy in a targeted cell-killing punch that knocks cancer cells out of commission.

“The technology at BLIP is truly remarkable,” said Cathy Sue Cutler, director of the Medical Isotope Research and Production (MIRP) program at the U.S. Department of Energy’s (DOE) Brookhaven National Laboratory. “It has produced findings that have helped millions of human lives.” 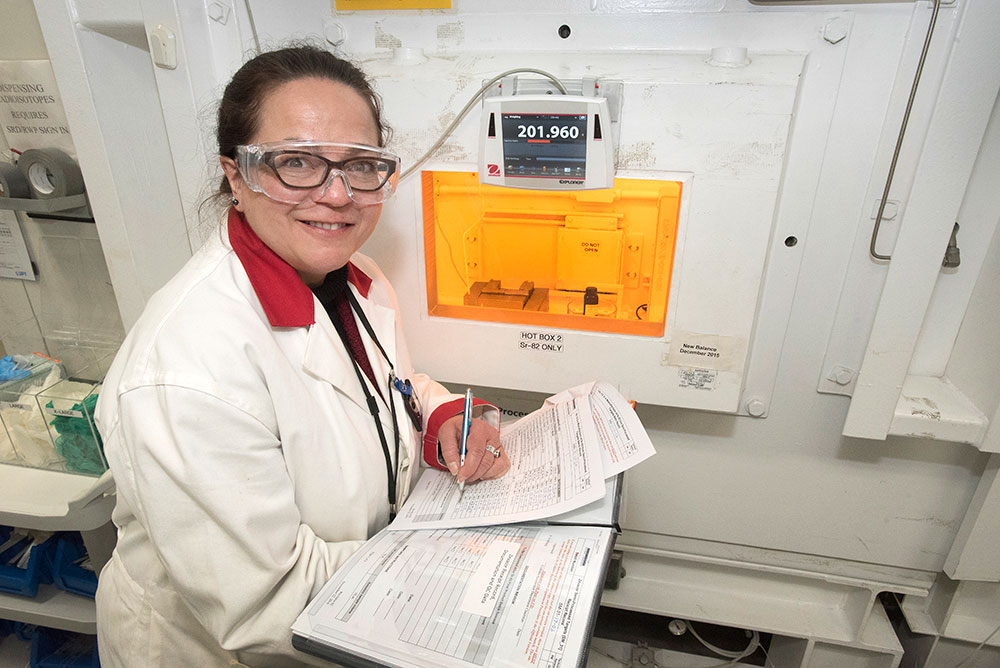 The linac sends protons in pulsed bunches—approximately six times per second! It can deliver beams to BLIP even when physics experiments at RHIC are running. Operators at Brookhaven Lab’s Collider-Accelerator Department (CA-D) control the beam’s energy and destination on a pulse-by-pulse basis, allowing ground-breaking physics research and isotope production to take place at the same time. 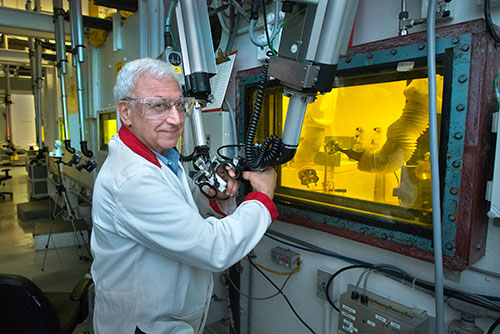 “This is the only linac in the world that can control a beam’s energy and direction pulse-by-pulse,” said retired senior scientist and former BLIP director Leonard Mausner, who used BLIP’s beam to make isotopes for 39 years. Sharing the linac’s 200 million electronvolt (MeV) beam offers BLIP unprecedented power to produce (relatively) large amounts of isotopes safely and efficiently. And the accelerator approach enables the production of isotopes that cannot be made in other ways (for example, at a nuclear reactor).

“BLIP’s inventors were very innovative with their designs,” said Cutler. “They were true trendsetters within our field.”

Cutler noted that BLIP's productivity and capability helped spawn the creation of other accelerator-based isotope production facilities around the world. Now part of the DOE Isotope Program, BLIP is instrumental in helping maintain the supply and distribution of critical isotopes.

One Beam, Many Isotopes

To make isotopes at BLIP, operators aim the high-energy proton beam very precisely at small puck-shaped targets. When the powerful protons kick certain subatomic particles out of the targets’ nuclei, they transform the material into the desired products.

Producing each isotope requires a specific raw material and amount of energy. But each target doesn’t need to be irradiated separately. Instead, BLIP’s operators invented a clever solution to produce multiple isotopes at the same time.

“We found a way to stack up to eight targets one after another to receive the beam,” said Mausner. “As the beam exits one target, its energy is reduced as it enters the next target.” "Arranging the targets in a particular order takes advantage of these decreasing energy levels and allows for multiple isotopes to be produced at the same time.”

A BLIP operator stacks multiple targets and loads them into a box to be irradiated. BLIP's beam raster system distributes energy over the entire surface of the stacked targets in a "bullseye" circular pattern.

BLIP also uses a “beam raster” system to maximize production of the desired isotope in each target. Multiple magnets steer the proton beam to rapidly “paint” targets in a circular pattern, rather than focusing the beam’s energy on a single point. This system distributes the beam’s energy more evenly across the raw material to transform more of the target into the desired isotope while also preventing target damage due to heating.

After irradiating the targets, physicists transport them to “hot cells” in a processing lab. These specially designed lead and steel chambers have robotic controls so scientists can safely work with samples, shielded from potentially harmful radiation. Here scientists perform innovative chemistry techniques to extract the pure isotope from the rest of the starting material.

“In the hot cells, we dissolve targets in solution and run them through a long tube called a column,” said MIRP scientist Jasmine Hatcher-Lamarre. “The column contains a substance that separates the pure isotope from the rest of the starting material.”

This process is repeated, as needed, to fully purify each isotope.

“From a single ‘puck’, we’ll get significant amounts of pure isotope,” Hatcher-Lamarre noted. “Afterwards, we run quality control testing to make sure that our products are pure to be shipped off site.”

A Race Against Time 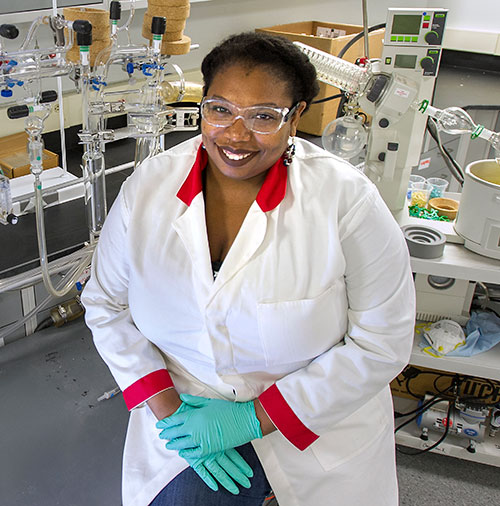 Throughout this process, Hatcher-Lamarre and her colleagues must be mindful of an isotope’s half-life—how quickly the radioactive atoms decay. After one half-life, the concentration of the desired material is reduced by half.

The isotopes produced at BLIP have half-lives that range from weeks to mere minutes. Planning, testing, and simulations ensure that the team can produce and purify their products before the isotopes “expire.”

“We have to understand the chemical properties of our target and final product, how the beam is going to hit the target, and how energy will be distributed throughout the target,” said Hatcher-Lamarre. “This requires careful design of the target pucks themselves, as well as our separation procedures.”

These efforts leverage the expertise of many scientists specializing in an assortment of fields at Brookhaven Lab.

“It’s really amazing to see how different fields of science—physics, chemistry, biology, and computing—come together,” said BLIP physicist Dohyun Kim. “At Brookhaven Lab, we have specialists in all these fields in one place, making it convenient to develop our plans and run production.”

For these kinds of materials science studies, scientists fire the linac’s proton beam directly at a material sample. Once irradiated, scientists run various tests to evaluate how the intense radiation has affected the sample to determine whether the materials could be viable options for high-radiation applications.

“Brookhaven Lab’s linac has the ability to simulate the long-term effects of radiation on any material in a short amount of time,” said Cutler.

The first shipment of isotopes produced at BLIP and shipped off site was a batch of iron-52, in 1973. This red blood cell tracer was delivered to the National Institutes of Health in Washington, D.C., where researchers used it to study bone marrow disease by highlighting locations of low red blood cell production in patients.

Since then, BLIP has produced at least 30 different radioisotopes, many of which have been used in human patients for medical imaging studies and/or in clinical practice. The number of patients treated ranges from thousands (for xenon-127, used for both lung and brain imaging) to tens of thousands (for germanium-68/gallium-68, used for evaluating infections, inflammation, and tumors) and even hundreds of thousands per year.

For example, in the 1980s, BLIP played a large role in developing strontium-82. This isotope has a half-life long enough that it can be transported to hospitals where its decay produces rubidium-82, a short-lived tracer used in positron emission tomography (PET) scans of the heart. Doctors use cardiac PET scans to monitor a patient’s heart muscle activity under stress, looking for areas of abnormal activity or reduced blood flow that could be an early sign of cardiac disease.

“The entire procedure is non-invasive,” said Cutler. “This allows doctors to make a diagnosis before any serious anatomical change is noticed.” In the United State, more than 350,000 patients receive rubidium-82 PET heart scans every year, and the demand for the isotope is growing.

Although strontium/rubidium-82 production has now been commercialized to industry, BLIP—along with the rest of the DOE IP facilities—remains as a “safety net” to supplement commercial production during disruptions in supply chains.

Beryllium-7, harvested from BLIP’s water-cooling tank, is used to calibrate detectors for natural forms of the isotope, which are produced when cosmic rays interact with particles in Earth’s upper atmosphere. When properly calibrated, these instruments help scientists measure how much natural beryllium-7 is carried by rainfall into the soil and oceans. Scientists use those measurements to track rainfall patterns and changes in soil and sediment deposits. 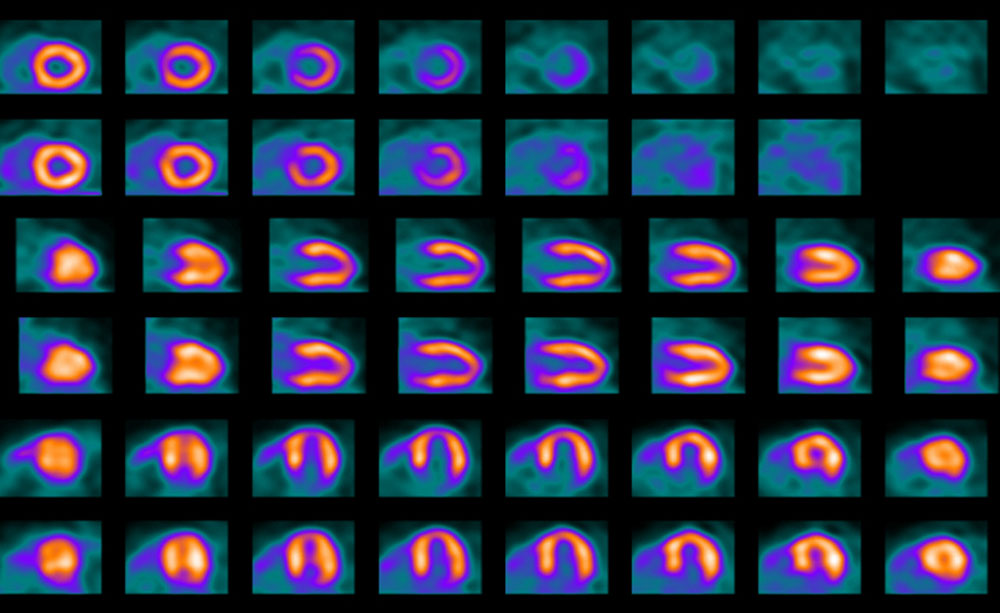 Actinium and the Future

"Actinium-225 has shown great promise in treating certain aggressive cancers—even those that have spread throughout the body and have failed to respond to other treatments," Cutler explained. "This isotope delivers a powerful, short-range dose of radiation that has the potential to kill cancer cells without damaging surrounding healthy tissues." 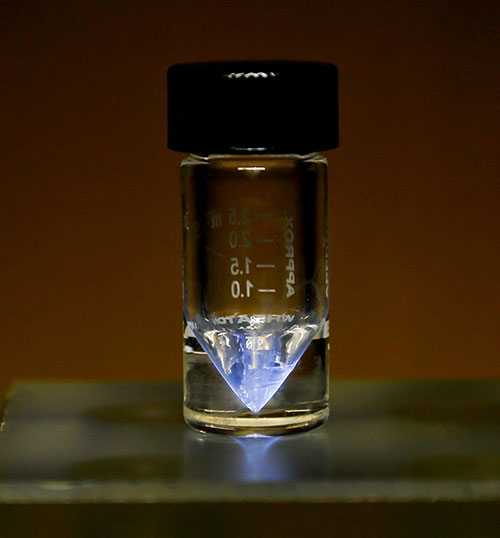 A vial of actinium-225, which is currently evaluated for its effectiveness in treating serious cancers (Credit: Oak Ridge National Laboratory and U.S. Department of Energy)

The three DOE labs are working to produce enough actinium-225 for large-scale clinical trials. These studies are required before a treatment can be approved for widespread use with patients.

BLIP scientists are also exploring ways of attaching certain isotopes to engineered antibodies, which bring isotopes directly to cancer cells by binding to receptors on a cancer cell’s outer membrane. This targeted treatment could be one-half of a new “theragnostic” approach that uses antibodies to deliver both therapeutic and diagnostic isotopes.

“By pairing together imaging and cell-killing isotopes that can be attached to the same antibody carrier, we can use that carrier to both diagnose and treat disease,” said Cutler.  The approach may also help create tailored treatments for individual patients to improve outcomes.

According to Cutler, “Theragnostics are the next big step in our field.”

To meet the demand of the nation’s hospitals and research facilities, BLIP is planning several upgrades.

“BLIP’s hot cells can’t meet demand for processing the needed quantities of isotopes like actinium-225,” Cutler noted. Currently, once targets for actinium-225 are irradiated at Brookhaven, they are shipped and processed at Oak Ridge. While feasible, this prolongs the production process, resulting in significant decay that limits the supply of actinium-225.

“Adding new hot cells with the appropriate capabilities for the MIRP program is the first priority,” said Cutler. “This upgrade will allow irradiated targets to be processed within Brookhaven Lab’s facilities within the next year.”

“600 MeV is a lot of energy,” said Raparia. “Along with the intensity upgrade, this would allow us to stack more and more targets to produce more and more isotopes!” 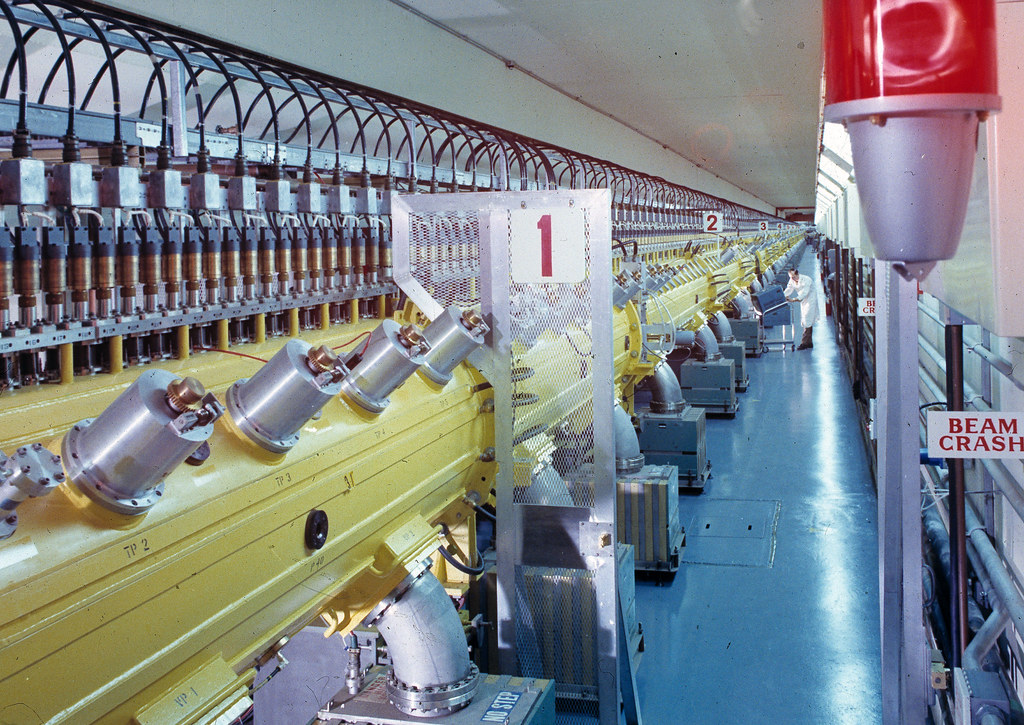 Historical photos of BLIP and the radioisotope program at Brookhaven National Laboratory. Click controls to advance the slide show. Click on individual photos to get more information about each.

Some accelerator advances in CA-D are already in the works as part of a plan to transform Brookhaven’s existing nuclear physics collider, RHIC, into a new Electron-Ion Collider (EIC). When RHIC completes its scientific mission in 2025, the transformation to the EIC will begin in earnest. And like RHIC, operations of the new EIC facility will continue to benefit and support BLIP and MIRP operations.

“MIRP is leveraged by the nuclear physics program at Brookhaven Lab, which supports staff, machinery, and operation of the linac for nuclear science research, and which also supplies the beam for BLIP to make isotopes,” said Cutler. “Without the nuclear physics program, it would be difficult for the MIRP program to keep running. There is a significant amount of synergy between the Brookhaven Lab accelerator programs and MIRP.”

“Looking to the future,” Cutler added, “I see BLIP continuing to provide novel research opportunities and isotopes to supply applications in both the medical and industrial fields.”