Scientists present a new phase of borophene, a quantum material with potential applications in flexible electronics, energy storage, and catalysis 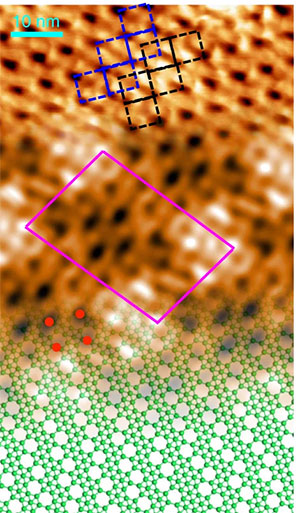 Scientists discovered a new phase of borophene and deciphered its atomic structure.

To develop new flexible electronics or materials for enhanced energy storage scientists need to broaden the scope of the available materials by understanding the fundamental behaviors of new materials. Borophene—a crystalline monolayer of boron—is such a new material with potential applications in flexible electronics, energy storage, and catalysis; however, to make use of its potential scientists need to understand how it can be synthesized and behaves.

In this study, researchers learned how to tune the growth of borophene on a copper (Cu) crystal by controlling the deposition of boron atoms and, in the process, discovered the existence of “four rotational” borophene. They showed that the unit cell is formed of ten boron atoms and two vacancies and that the electronic band structure has four different Dirac cones. To achieve this the researchers used a multimodal approach in which they combined several materials characterization tools. Among these tools were the Electron Spectro-Microscopy (ESM) beamline at the National Synchrotron Light Source II (NSLS-II), where the group collaborated with researchers from the Center for Functional Nanomaterials (CFN) and NSLS-II to discern the chemical signature of both copper and boron before and after the growth process. Both the CFN and NSLS-II are U.S. Department of Energy (DOE) Office of Science user facilities located at DOE’s Brookhaven National Laboratory.

These new insights into borophene’s properties offer new pathways for future studies on this multipurpose material.

This research was supported by the US Department of Energy, Basic Energy Sciences, Materials Sciences and Engineering Division. R.W. and A.G. were supported by the Gordon and Betty Moore Foundation’s EPiQS Initiative through grant no. GBMF9074. S.E. acknowledges support from the NSF Graduate Research Fellowship (grant no. DGE1752134). I.K.D. acknowledges the financial support of the BNL Gertrude and Maurice Goldhaber Distinguished Fellowship. This research used resources of the Centre for Functional Nanomaterials and National Synchrotron Light Source II, which are US DOE Office of Science Facilities at Brookhaven National Laboratory, under contract no. DE-SC0012704. The computations used the Extreme Science and Engineering Discovery Environment (XSEDE), which is supported by National Science Foundation grant no. ACI-1548562, via computer time on the Comet supercomputer as enabled by XSEDE allocation MCA08X007.