The following news release was originally issued by the U.S. Department of Energy’s Fermi National Accelerator Laboratory. Jens Koch is a principal investigator and subthrust leader, with expertise in novel qubit design to optimize bosonic code ancilla, for the devices thrust at the Brookhaven Lab-led Co-design Center for Quantum Advantage (C2QA). C2QA is one of five Department of Energy Quantum Information Science Research Centers established in support of the National Quantum Initiative. For more information on Brookhaven’s involvement, contact Denise Yazak (Dyazak@bnl.gov, 631-344-6371). 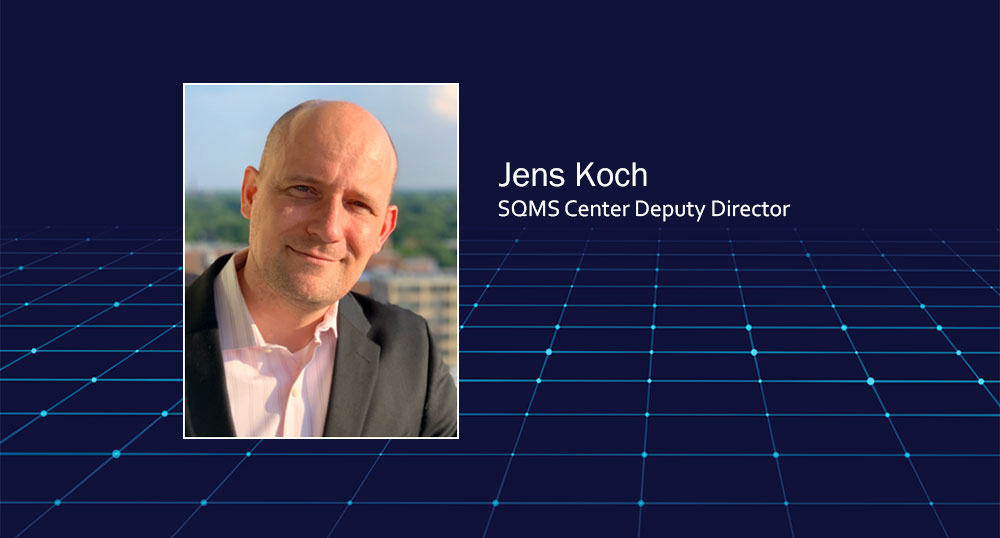 Jens Koch, professor of physics at Northwestern University, will serve as the next deputy director for the collaboration of 23 partner institutions that make up the Superconducting Quantum Materials and Systems Center, hosted by the U.S. Department of Energy’s Fermi National Accelerator Laboratory.

Already contributing to the SQMS collaboration as a principal investigator, Koch will now bring his world-leading expertise in quantum information science, as well as his academic experience, to the SQMS leadership team.

Koch replaces Jim Sauls, the Sarah Rebecca Roland Professor of Physics at Northwestern. Sauls has recently accepted the position of Hearne Chair of Theoretical Physics and co-director of the Hearne Institute for Theoretical Physics at Louisiana State University. Sauls will remain in the SQMS fold; he will continue as a PI and serve as chief of theoretical physics for the SQMS Center.

“It’s pretty clear that I have large shoes to fill, and I’m looking forward to the challenge,” said Koch. “Jim Sauls has really done a fantastic job and was a huge driving force in getting the SQMS proposal off the ground. It’s a great opportunity to continue his work and to help ensure that the collaborative ties between Fermilab, Northwestern and all the SQMS partners keep getting stronger. Preparing for this position has been an eye-opener: There is so much exciting research going on in all parts of SQMS! It is a privilege to work with the DOE, with SQMS Director Anna Grasselino and with all of our SQMS PIs. I look forward to helping shape the center’s ongoing scientific journey and assisting Anna in steering this enterprise to achieve the goals in our strategic roadmap.”

The SQMS Center was launched in August 2020, with Northwestern playing a major role in its formation. Today, Northwestern is a core partner of the SQMS Center, which supports research activities of more than 400 members.

“The fundamental research in quantum science and technology, as well as the workforce training under way at SQMS are vital, and will transform technologies enabled by superconducting quantum materials,” said Northwestern’s Vice President for Research Milan Mrksich. “We are extremely proud of our Northwestern colleagues, who bring multidisciplinary expertise to this partnership with Fermilab — now with Jens Koch serving as SQMS deputy director. Jens is a celebrated leader in his field, having co-invented two qubits widely used in laboratories around the world. He will be an outstanding leader in this new role, and I look forward to the team’s advances that will develop quantum circuits for quantum computing.”

Establishing a new quantum center had long been a major vision shared between Fermilab and Northwestern: “Prof. Jim Sauls and I had dreamt of forming a collaboration focused around Fermilab and Northwestern’s strengths in applied superconductivity,” said Grassellino. “With SQMS, that dream has become a reality, and it was partially a fruit of the relationships and collaborations we had built over the years with the Center for Applied Physics and Superconducting Technology. The choice of Prof. Koch as the new deputy director was straightforward: His reputation in [quantum information science] precedes him, and we have already developed a strong working relationship.”

CAPST, founded in 2017 by Grassellino and Sauls, provided the framework for exploring superconducting technologies and their applications. CAPST created a bridge between Northwestern University and Fermilab, enabling new workforce development opportunities and collaborations in physics, material science and engineering, and acted as a seed for the SQMS Center. As SQMS enters year three, researchers remain laser-focused on the center’s ambitious goals, including the development of a beyond-the-state-of-the-art quantum computer.

“It’s quite amazing how much expertise and excellence are represented in the center,” said Koch. “SQMS offers unique opportunities for boosting scientific progress. As a center, SQMS combines vital resources not available at any individual institution. By joining forces, we clearly see how SQMS is more than just the sum of the pieces. We all look forward to even more of those high-impact research results in the future.”

The Superconducting Quantum Materials and Systems Center at Fermilab is supported by the DOE Office of Science.