The following news release was originally issued by Argonne National Laboratory. Julian Martinez-Rincon, currently a staff scientist in the Instrumentation division at DOE’s Brookhaven National Laboratory, participated in this research. He specializes in Quantum Information Science & Technology and is the main point of contact for the Lab’s Quantum Network Facility. For more information on Brookhaven’s involvement, contact Denise Yazak (Dyazak@bnl.gov, 631-344-6371). 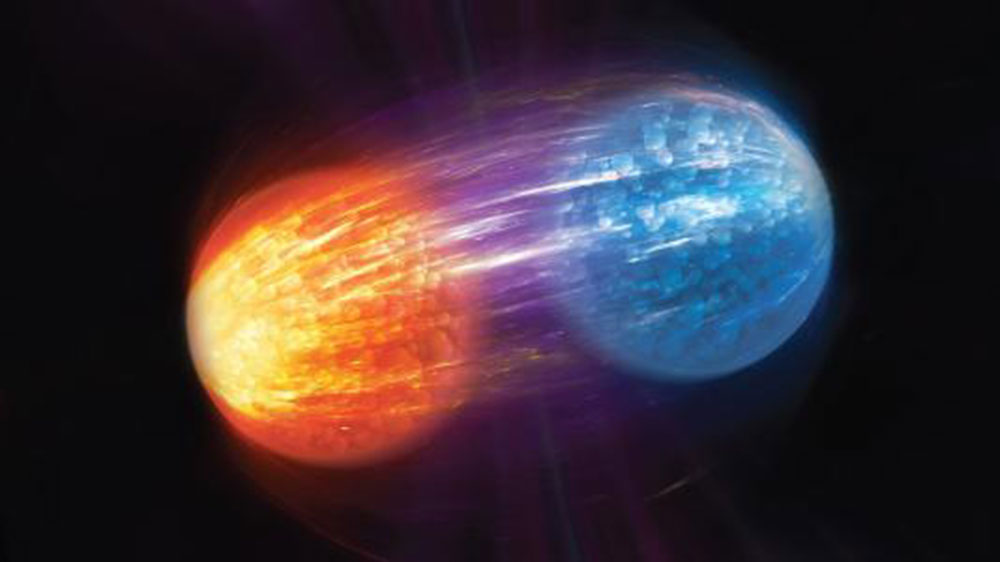 Entanglement, a special property of nature at the quantum level, is a correlation between two or more objects. A research team recently harnessed entanglement to develop more precise networked quantum sensors. (Image by Brookhaven National Laboratory.)

Researchers affiliated with the Q-NEXT quantum research center show how to create quantum-entangled networks of atomic clocks and accelerometers — and they demonstrate the setup’s superior, high-precision performance.

For the first time, scientists have entangled atoms for use as networked quantum sensors, specifically, atomic clocks and accelerometers.

“The impact of using entanglement in this configuration was that it produced better sensor network performance than would have been available if quantum entanglement were not used as a resource,” said Mark Kasevich, lead author of the paper, a member of Q-NEXT, the William R. Kenan, Jr. professor in the Stanford School of Humanities and Sciences and professor of physics and of applied physics. “For atomic clocks and accelerometers, ours is a pioneering demonstration.”

What is quantum entanglement? How does it apply to sensors?

Greater sensitivity in atomic clocks and accelerometers would lead to more precise timekeeping and navigation systems, such as those used in global positioning systems, in defense and in broadcast communications. Ultraprecise clocks are also used in finance and trading.

“GPS tells me where I am to about a meter right now,” Kasevich said. “But what if I wanted to know where I was to within 10 centimeters? That’s what the impact of better clocks would be.”

A note on ultraprecise clocks

One can mark the passage of time by counting the number of pulses in an electromagnetic wave, just as you would count the ticks of a clock. If you know that a particular wave pulses 6 billion times per second, you know that, once you count 6 billion crests of the wave, one second has passed. So knowing the exact frequency of a microwave gives one a precise way to track time.

The entanglement: Rubidium atoms, trapped inside a cavity, are separated into two groups of about 100,000 atoms each. The groups sit between two mirrors. Light is made to bounce back and forth between the mirrors, tracing its way through the groups of atoms with every shot. The ricocheting light entangles them.

The sensing: A microwave ripples through the two groups of atoms. The atoms that happen to resonate with the microwave’s particular frequency respond by changing to a different state, like the wine glass that vibrates when a soprano hits just the right note.

Similarly, when a particular acceleration is applied to the atomic groups, some fraction of the atoms in each group responds by changing state.

The measurement: The two entangled atomic groups behave like two faces of a single clock, or two readings of one accelerometer.

The research team measured the number of atoms that changed state — the ones that vibrated like a wine glass — in each group.

Increased precision: The Kasevich team found that entanglement improves the precision in the frequency or acceleration difference read by the displays.

“If you want to know how long something takes, you might look at one clock as a starting point and then run to another room to look at another clock, the end point,” Kasevich said. “Our method exploits the entanglement principle to make that comparison as precise as possible.”

In the team’s experiment, the two groups of atoms were separated by about 20 micrometers, close to the average width of a human hair.

Their work means that time or acceleration can be compared, with unprecedented sensitivity, between four separate, albeit close-together, locations.

“In the future, we want to push them out to longer distances. The world wants clocks whose time can be compared. It’s the same with accelerometers. There are sensing configurations where you want to be able to read out the difference in the acceleration of one group with respect to another. We were able to show how to do that,” Kasevich said.

“This is a tour de force result from Mark and his team,” said Q-NEXT Deputy Director JoAnne Hewett, who is also the SLAC National Accelerator Laboratory associate director of fundamental physics and chief research officer as well as a Stanford professor of particle physics and astrophysics. “This means we can harness entanglement to develop sensors that are far more powerful than those we use today. We are another step closer to wielding quantum phenomena to improve our everyday lives.”

This work was supported by the DOE’s Office of Science National Quantum Information Science Research Centers as part of the Q-NEXT center.

Argonne National Laboratory seeks solutions to pressing national problems in science and technology. The nation’s first national laboratory, Argonne conducts leading-edge basic and applied scientific research in virtually every scientific discipline. Argonne researchers work closely with researchers from hundreds of companies, universities, and federal, state and municipal agencies to help them solve their specific problems, advance America’s scientific leadership and prepare the nation for a better future. With employees from more than 60 nations, Argonne is managed by UChicago Argonne, LLC for the U.S. Department of Energy’s Office of Science.

The U.S. Department of Energy’s Office of Science is the single largest supporter of basic research in the physical sciences in the United States and is working to address some of the most pressing challenges of our time. For more information, visit https://energy.gov/science.