The annual Joint Users’ Meeting of the National Synchrotron Light Source (NSLS) and Center for Functional Nanomaterials (CFN) brought together a special subset of current and future facility users. More than 50 faculty members from minority-serving institutions came to Brookhaven May 23-26, 2011, to finalize a research proposal that would unite them in energy storage studies at the CFN and NSLS. 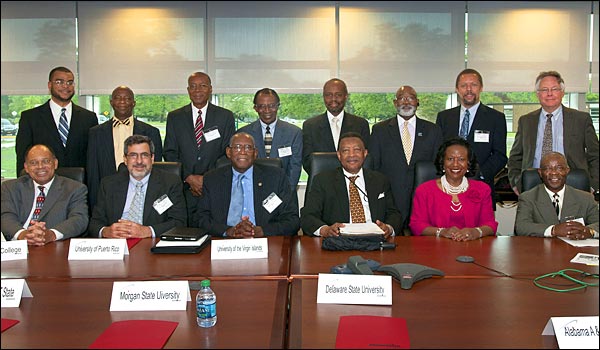 The ultimate goal of the professors, who belong to the Interdisciplinary Consortium for Research and Educational Access in Science and Engineering (INCREASE), is to assist minority-serving institutions in gaining access to world-class research facilities. The group also aims to facilitate education and research training, especially for African-, Hispanic-, and Native-Americans and women.

The week’s activities began with the signing of a memorandum of understanding between the consortium and Brookhaven Lab. 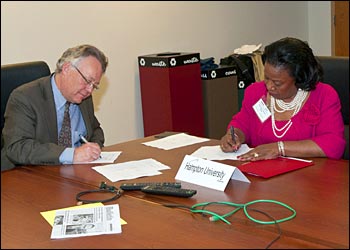 Brookhaven Deputy Director for Science and Technology Doon Gibbs signs a memorandum of understanding on behalf of the Laboratory along with the presidents of the 11 INCREASE core institutions.

“This MOU should seal and document our joint efforts to increase the number of minority-serving institution faculty and students who use the CFN, NSLS, and other research facilities at Brookhaven and other national laboratories around the country,” said workshop organizer Noel Blackburn, from Brookhaven’s Office of Educational Programs.

"Relationships like these are just as beneficial for Brookhaven Lab as they are for the consortium members,” said Brookhaven Deputy Director for Science and Technology Doon Gibbs, who welcomed the participants and signed the MOU on behalf of the Laboratory. “In order to solve the problems the nation faces in energy, as well as to grow the Laboratory consistent with our vision, it is critical that we attract a larger and more diverse workforce. We can't succeed without that." 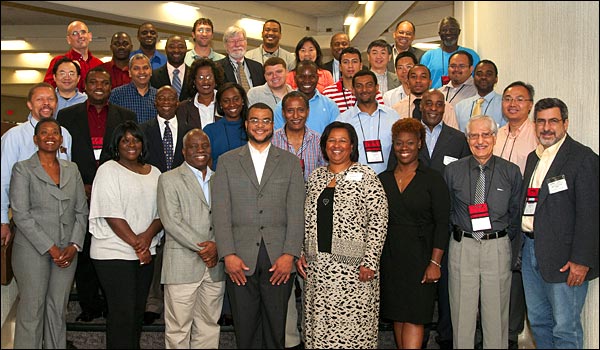 Based at Hampton University and formed at Brookhaven in 2007, INCREASE has held yearly workshops with support from the Photon Sciences Directorate, the Office of Educational Programs, and a National Science Foundation grant through Southern University. With hands-on research demonstrations and proposal-writing tutorials, the workshops have taught INCREASE members how to transform themselves and their students into successful NSLS and CFN users. To date, the workshops have resulted in 16 new NSLS users and 11 potential CFN users.

“INCREASE is really about leveling the playing field for research and education,” said INCREASE President Eric Sheppard, dean of the School of Engineering and Technology at Hampton University. “We can do it ourselves. It’s about building infrastructure and institutions. It’s also about building people.”

Now, INCREASE members are working on a project that could join these new users in one collective research effort. During a day-long workshop, after learning about the latest in energy research at Brookhaven from Associate Laboratory Director for Global and Regional Solutions Gerry Stokes, the professors developed a letter of intent to submit a proposal for a National Science Foundation Science and Technology Center on energy storage and fuel cell technologies. If selected, the consortium would receive up to $5 million per year for five years, renewable for an additional five years, to explore topics such as utilizing thermoelectric materials for combined heat and power, nanomaterials and ionic liquids for applications in batteries and electrochemical capacitors, large geothermal energy storage systems, power conversion systems, and fuel cells.

“We’ve been committed to INCREASE for the last four or five years,” Sheppard said. “Now we need to start seeing results. The proposal to NSF is one step in that direction.”

Among presenters at the workshop, the group heard from Nancy Hebron-Isreal, a grants program manager at the U.S. Nuclear Regulatory Commission, who discussed a number of available nuclear education grants and fellowships. In addition, Alexander Nicholas, senior policy advisor from the Office of Innovation and Entrepreneurship at the Department of Commerce, spoke about the “i6 Challenge," which encourages researchers to bring innovative ideas to the marketplace.

INCREASE plans to collaborate with other national labs by holding its 5th annual Synchrotron Science Workshop at SLAC National Accelerator Laboratory and Lawrence Berkeley National Laboratory in July 2011. This proof of concept will eventually allow INCREASE to hold annual workshops for minority professors throughout the entire DOE complex, creating access and developing new users for these cutting-edge facilities.