“There it is — the world’s most beautiful physics experiment,” says physicist Chris Polly from a metal footbridge that crosses over the 14-meter blue steel ring of Brookhaven National Laboratory’s muon g - 2 experiment, now being disassembled. A haze of dust hangs in the air above Polly and a handful of other physicists and engineers who’ve gathered together to help resurrect the $20-million machine by transporting it hundreds of miles to Fermi National Accelerator Laboratory in Illinois. 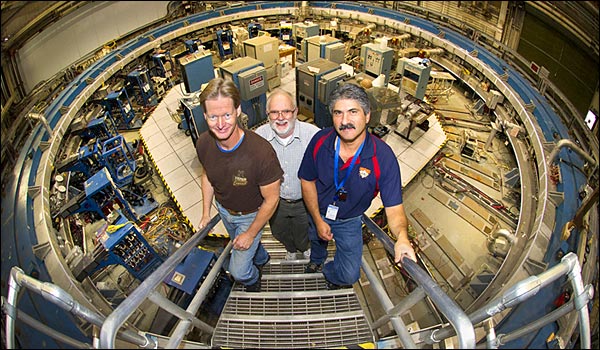 The main component of the experiment, the largest-diameter superconducting magnet in the world, has lain dormant for 10 years in a spacious hall near Brookhaven’s Alternating Gradient Synchrotron (AGS). Until its last run in 2001, the muon g - 2 experiment tracked the irregular spin of muons in a magnetic field. This experiment was a precise test of the validity of the Standard Model — the reigning theoretical portrayal of how three of the known four forces (gravity excluded) govern the structure and behavior of all elementary particles.

The experiment was a significant improvement upon a similar study done at CERN in Geneva, Switzerland, which launched in 1959 to test the effects of electromagnetism on charged particles like electrons, protons, and muons.

Inside a magnetic field, muons (which are heavy, short-lived subatomic particles that result from the decay of pions created when energetic protons smash on solid targets) “look” like tiny tops spinning on an axis. The measurement taken by Brookhaven’s muon g - 2 experiment is of the exact angle of the axis upon which these subatomic dreidels tilt and whirl, which differs slightly from the Standard Model and is often referred to as the “anomalous magnetic moment” of the muon.

By the time the experiment reached the end of its run in 2001, researchers at Brookhaven with collaborators at 11 other institutions had measured what a recent article in symmetry breaking, a joint publication of Fermilab and SLAC National Accelerator Laboratory, describes as “a tantalizing discrepancy” between theory and experiment.

The precision of the measurement taken at Brookhaven could point to the existence of new physics beyond the Standard Model, of as-yet-undiscovered particles associated with muons, or of an invisible sub-structure to muons themselves, which are currently thought to be elementary particles.

“Muon g - 2 at Brookhaven confirmed a significant deviation from the existing theory,” says Polly, who is project manager of the Fermilab endeavor. “Now muon g - 2 needs more data and confirmation from a higher-precision experiment, which we’ll be able to build on top of the existing accelerator complex at Fermilab. This complex is uniquely equipped to reduce some of the statistical limitations of the Brookhaven experiment.” 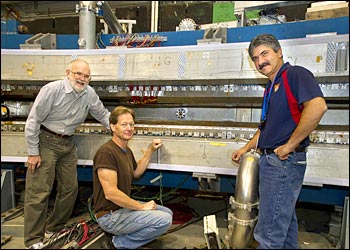 Ten years after it ceased taking data at Brookhaven, muon g - 2 is scheduled to embark on a cross-country journey from the woods of Long Island to the plains near Chicago, where scientists at Fermilab will re-fill its storage ring with muons created at Fermilab’s Antiproton Source. Along the way, many components of the experiment, including its high-precision detector, will go through improvements at Brookhaven Lab, Boston University, Fermilab, and Cornell University, among other institutions.

“Muon g - 2 at Fermilab will be a pretty straightforward move — they’ll build upon the infrastructure and design already established at BNL,” says Brookhaven physicist Bill Morse, resident spokesperson for muon g - 2 at BNL. “This collaboration is a great example of how our national labs unite together to improve and build upon the things they specialize in. Muon g - 2 needs to take a lot more data, and Fermilab can provide a beam of muons that can produce events four times more frequently than we can at Brookhaven.”

Morse elaborates, “If we tried to create that kind of intense beam here using the AGS, we’d end up with a pile-up of muons inside the ring — which is kind of like the subatomic version of the worst traffic jam on the Long Island Expressway. At Fermilab, however, they can boost the number of muon cycles injected and create events in a more balanced way, so that there’s never any ‘rush hour’ inside the ring.”

Polly worked on muon g - 2 as a grad student in the ‘90s and came back to BNL this summer to begin the process of disassembling the experiment so that the collaboration could begin research and development for the upgrade. The meeting between Brookhaven and Fermilab physicists and engineers this summer was the first time the teams came together to survey the facility in person and hammer out some of the technical challenges of the project.

Many of the scientists and engineers standing on the footbridge arching over the semi-vacant experimental ring were part of Brookhaven’s muon g - 2 project when it was first built. While researchers from both labs walked the perimeter discussing how to reconstruct the machine (all the while taking pictures with their smart phones for visual backup), they recounted the trials of trying to build each component of the unique superconducting coil.

“The magnet we built here at BNL is a work of art of engineering,” says Morse. “Its three superconducting coils are huge, yet they create a magnetic field that we can measure to within a fraction of a part per million.”

Because they needed such a precise magnetic field to measure muon spin and get meaningful results, the magnetic coil built 20 years ago at Brookhaven was constructed as one solid piece, which creates certain challenges for the Fermilab team.

“While the 650-ton muon storage ring can be taken apart and shipped via trucks to Illinois,” says Polly, “the monolithic 14-meter diameter cryostats with superconducting coils inside are a little harder to move down the highway, which you’d have to shut down completely — and on some of the roads leading out of Brookhaven, you’d be taking out power lines trying to get the ring through.”

The plan right now includes picking the coil up from BNL using a Sikorsky S64 aircrane (the kind of heavy-duty helicopter that can lift an army tank), placing it onto a barge for transport through the Saint Lawrence Seaway and down through the Great Lakes to the shores of Chicago, where another aircrane helicopter will ferry it home to Fermilab.

The new muon g - 2 experiment passed a U.S. Department of Energy (DOE) peer review last year and researchers expect the first of five stages of approval from the DOE to come early in 2012. If all goes to plan, the next incarnation of muon g - 2 will start taking data within five years.