During the Japan Earthquake Relief fundraiser held earlier this year at BNL, Lab employees and their families made many paper cranes, which symbolize health and good wishes to the Japanese people. The cranes were given out to people who made donations at a desk in Berkner Hall staffed daily by members of BERA’s Asian Pacific American Association and other caring volunteers. The leftover cranes (more than 100) were sent to OshKosh B’Gosh for their “Cranes for Kids” program. In this program, for every crane made, OshKosh B’Gosh sent an article of clothing to the children of Japan. 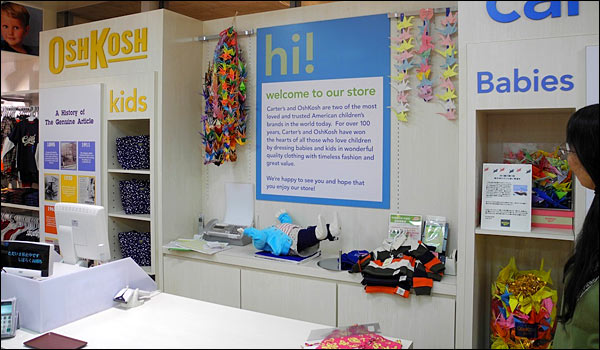 Paper cranes symbolize health and good wishes for the Japanese people. Some of the cranes hanging behind the register at this store in Tokyo may have been made by BNL employees and their families. For every crane made and sent to them, OshKosh B’Gosh sent an article of clothing to the children of Japan.

Recently, Dave Stampf of the Computational Science Center was in Japan visiting family and friends and was wandering through a department store in Tokyo looking for baby clothes.

Said Stampf, “We came across an area of the store that sold Osh-Kosh clothing. Much to our surprise, we saw a slew of paper cranes — maybe some of them came from BNL! I thought that all those who made the cranes at the Lab would like to know that they did indeed end up in Japan and that these efforts were appreciated.