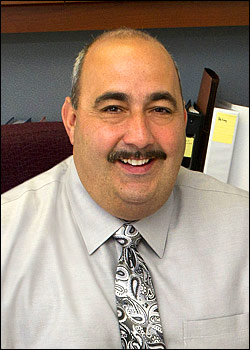 In a sense, Joe Libertelli has been preparing for his new job as the Lab’s Labor Relations Business Partner since the start of his career.

He’s been on both the management side and union side. He’s been a beat cop, emergency medical technician, statistician, secretary-treasurer for a Teamsters local in New York City and Long Island, and most recently, manager of human resources and labor relations for the Suffolk County Water Authority.

“My work background gives me a different perspective,” Libertelli said. “This will help me in my job here, I’m certain. The commonality for all these jobs is they’ve required consistency, fairness, and honesty.”

“But what’s going to help me be successful in this job over the long term will be my ability to earn the trust of the people on both sides of the labor relations equation,” he said.

But the credentials and resume don’t tell the full story.

“When I was still a police officer, I had the opportunity to work as a community affairs officer, which put me right into the heart of some of the most contentious issues for the department and members of the community,” he said. “At first I was uncertain how I would do in that job but I learned I had a real interest in how people relate to each other. Above all, I believe in fairness. People knew me for my fairness then and I expect that’s how they will know me here, too.”

Libertelli feels he’s come full circle with his work at the Lab in many ways. While he’s originally from Whitestone, Queens, he and his wife have been living in Suffolk County for many years, first in Southold and now in Bayport. Also, his grandfather and namesake Joseph Libertelli trained at Camp Upton in 1917 and deployed with the 77th Division, fighting in the Argonne Forest with the “Lost Battalion.”

“So for many reasons, I’m very happy to be here, and I look forward to working closely with the unions and everyone else here at the Lab,” he said.