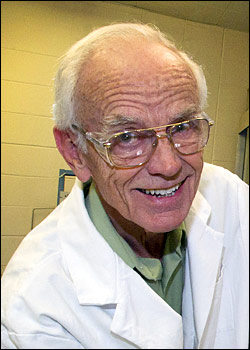 Richard Holroyd, a retired senior chemist in the Chemistry Department, has been named Senior Scientist Emeritus. An internationally recognized leader in the fields of radiation chemistry and the chemistry of electrons in non-polar fluids, Holroyd has made numerous distinguished scientific contributions during his more than 40-year career at Brookhaven Lab.

After his retirement in 2003, Holroyd continued to work at the Lab two days per week, conducting experiments with Chemistry Department staff and collaborators from other institutions. He said, “I am honored to be given Emeritus status, and I continue to enjoy working on my own ideas in my research. The Lab has been a great place to pursue ideas in basic research.”

“I wanted to understand not only why electrons move so fast in non-polar liquids, but also why they have different drift velocities in different liquids,” Holroyd said. “It was curiosity-based research, purely basic studies, relevant to the interests of the Atomic Energy Commission, Energy Research & Development Administration, and DOE.”

To help understand electron mobility, Holroyd measured the energy levels of excess electrons in non-polar fluids using the photoelectric effect. He would shine ultraviolet (UV) light on a metal immersed in a non-polar liquid and then measure the energy required to kick the electrons out of the metal. The electrons are emitted because they absorb energy, or electromagnetic radiation, from the UV light. Holroyd showed there was a definite link between electron energy level and mobility.

Holroyd’s research in electron mobility has proven valuable in the design of high-mobility, fluid-based nuclear and high energy particle detectors, including the ATLAS detector, which BNL had a major part in designing and building for the Large Hadron Collider at CERN, the European Organization for Nuclear Research.

In related research, Holroyd conducted studies to understand the chemical behavior of excess electrons in non-polar fluids. He irradiated solutions of hydrocarbon fluids, for example, which contain a solute of interest. A solute is a substance dissolved in a fluid with which an electron reacts. He found that excess electrons that are created through radiation react by attaching to solute molecules much faster than other species, such as ions or radicals. His studies, in which he varied the density of the fluid by applying pressures of up to 3,000 atmospheres, revealed the energetics and other factors that influence the rates of these reactions. To understand these reactions in greater detail, Holroyd is still working with members of the Thermal and Photoinduced Reactions Group, headed by John Miller of the Chemistry Department. These studies are carried out using the Chemistry Department’s Laser Electron Accelerator Facility.

In the 1980s, Holroyd was an innovator in the application of synchrotron radiation to problems in chemical physics. He was a co-spokesperson with fellow Senior Chemist Emeritus Ralph Weston for Brookhaven’s National Synchrotron Light Source (NSLS) beamline U9A, where Holroyd used vacuum ultraviolet light to measure lifetimes of excited states and ionization efficiencies of hydrocarbons and other molecules.

In the 1990s, Holroyd and collaborators extended this work to the Chemistry Department’s NSLS x-ray beamline X7B. Holroyd also worked at other synchrotron light sources in Wisconsin and at Cornell University to measure the effects of x-rays on non-polar liquids.

Recently, Holroyd, in collaboration with Cherice Evans and her students at the City University of New York, has been measuring the mobility of excess electrons in supercritical fluids – fluids at a temperature above which a gas will not liquefy, called the critical point. This work is performed at the Chemistry Department’s Van de Graaff accelerator, which can create pulses of x-rays that release electrons into the fluid under study.

Holroyd earned a B.A. in chemistry from the College of Wooster in 1952 and a Ph.D. in chemistry from the University of Rochester in 1956. As an undergraduate student during the summer of 1954, he worked at BNL, where he was introduced to the field of radiation chemistry. In 1957, he joined the University of California, Los Angeles, as an assistant professor of engineering and was stationed in Indonesia, where he helped to set up and also taught at an engineering school, Gadjah Mada University, in Jokjakarta.

Upon returning to the U.S. in 1959, Holroyd became a fellow at the Radiation Laboratory at Mellon Institute in Pittsburgh, Pennsylvania. In 1964, he joined the technical staff at Atomics International in Canoga Park, California, and in 1969, he became a chemist in Brookhaven Lab’s Chemistry Department. He received tenure in 1974 and was promoted to senior chemist in 1989.

Holroyd was a recipient of the Alexander von Humboldt U.S. Senior Scientist Award in 1975-1976. His research at Brookhaven has been published in over 150 peer-reviewed publications and has been cited more than 2,000 times.