Marty Woodle retired from BNL in November 2001 as Mechanical Engineering Section Head at the National Synchrotron Light Source, and after several years as a consultant at the Accelerator Test Facility, retired again in January of this year. But he doesn’t see himself retiring any time soon from his work as a volunteer at the Lab’s primary and secondary school science competitions. 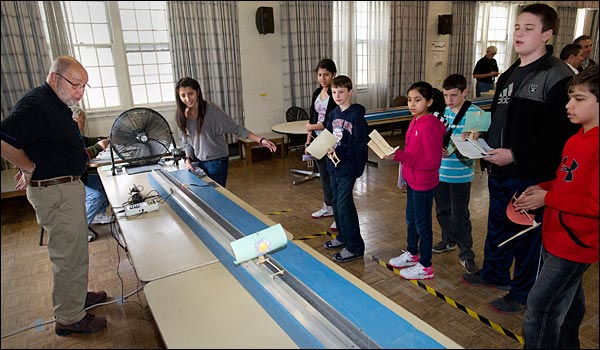 Marty Woodle, left, with student participants in the 2012 Maglev Contest at BNL

“When I first started volunteering, it was lot of fun and it is still is a lot of fun,” Woodle explained. “The Lab is truly the best place I’ve ever worked.”

Woodle has volunteered at the contests organized by the Office of Educational Programs (OEP), for more than 30 years. It began with his fostering of the Bridge Building Contest, in which high school students build bridges that must meet construction design criteria and then withstand the weights loaded onto them to test their structure. Woodle was the competition’s first engineer and originally designed the much-revised software that keeps track of the bridges’ performance in the competition.

In the years since, Woodle has volunteered at the Lab’s annual Maglev Contest, Regional Science Bowls for middle and high school students, Science Fair for elementary school students — and Summer Sundays, when the public can visit the Lab and participate in science-related activities.

“Marty is a super volunteer,” said Melvyn Morris, an OEP administrator. “He has always given his time to OEP and is always willing to help. He’s been responsible for keeping the Bridge Building Contest going. I value his experience and his talent.”

Apart from the fun of activities and competition, Woodle said that the events play an important role in piquing young people’s interest in science.

“I think a wide education in science and engineering and math is basically necessary for any society to advance,” Woodle said. “New inventions are coming out all the time and are vital to our economy. The competitions are usually fun for the young people and may start a lifetime interest in these areas.”

At a recent Bridge Building Contest, Woodle met a parent who had participated in a contest that had taken place at BNL decades earlier.

“I think it’s really important to help young kids to get educated in a field that’s going to support them and provide them with interesting work that’s worthwhile,” Woodle said.

By this time of year, most of OEP’s school competitions have already taken place, the trophies and medals have been given out and the winners have advanced to the national stages of competition.

One competition, however, is still to come.

“I’m looking forward to the event this Saturday, the Elementary School Science Fair,” said Woodle. “That’s really cool, and It’s great to see what some of the kids do.”