Brookhaven Science Associates (BSA), a company formed by a partnership between Battelle and Stony Brook University (SBU) to manage Brookhaven Lab, has announced the 15 winners of the annual BSA Scholarships, which go to children of BNL employees in continuation of a tradition instituted at BNL in 1965. Each BSA scholar is a high-school senior who will receive $2,500 per year for up to four years of study at the college or university of his or her choice. As an additional benefit, SBU, which is committed to bringing the SBU and BNL communities closer together, has offered a matching scholarship to BSA scholarship students who are admitted and enroll as full-time students at SBU in the fall of 2012. The 15 BSA scholars for this year are listed below. 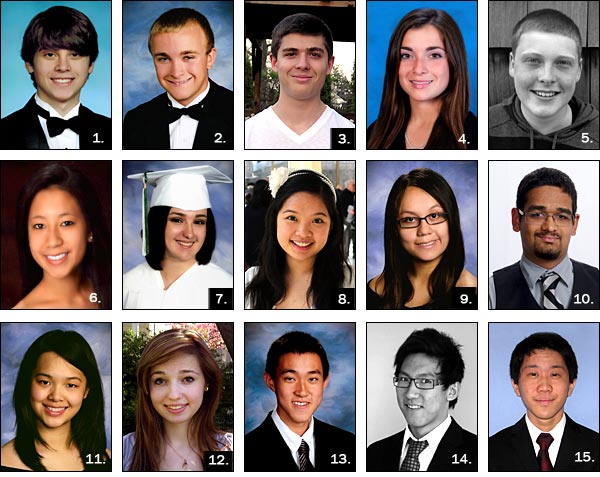 1. Jared Angona, son of Ronald Angona of the Instrumentation Division, lives in Shirley and attends McGann Mercy High School in Riverhead. He will attend Stony Brook University this fall.

2. William Bland of Shoreham is the son of Leslie Bland who works in the Physics Department. A senior at Shoreham-Wading River High School, he plans to attend Bucknell University and major in global management and economics.

3. Matthew Boose lives in Patchogue and is a senior at Patchogue-Medford High School. The son of Steve Boose in the Physics Department, he will attend Binghamton University to study computer engineering for a career with computers and electronics.

4. Gabriele Escallier, daughter of John Escallier of the Superconducting Magnet Division, lives in Riverhead and attends Riverhead High School. She will complete coursework for the pre-medicine track at the University of Miami.

5. Samuel Hoff is a senior at Bellport High School and a resident of East Patchogue. He is the son of Lawrence Hoff of the Lab’s Collider-Accelerator Department and will attend the University of California, Los Angeles.

6. Julia Huang, daughter of Haixin Huang from the Collider-Accelerator Department, lives in South Setauket and attends Ward Melville High School. She will attend the Trinity College of Arts and Sciences at Duke University.

7. Angeliki Ellie Laloudakis, a resident of Farmingdale who attends Farmingdale High School, is the daughter of Nikolaos Laloudakis of the Collider-Accelerator Department. She will study English at the State University of New York at Geneseo for a career in journalism.

8. Sonya Li, daughter of Qiang Li in the Condensed Matter Physics and Materials Science Department, lives in East Setauket and is a senior at Ward Melville High School. Working toward a career in biological and physical sciences, she will major in chemistry at Columbia University.

9. Vivienne Litzke lives in Smithtown and attends Hauppauge High School. She is the daughter of Wai-Lin Litzke in the Safety & Health Services Division and will attend McGill University in Canada.

10. Chirag Raparia, son of Deepak Raparia from the Collider Accelerator Department, is a resident of Shoreham and a senior at Shoreham-Wading River High School. He will attend Binghamton University to study anthropology for a career in medical research.

11. Anna Sato is a senior at Ward Melville High School and lives in East Setauket. She is the daughter of Yimei Zhu of the Condensed Matter Physics and Materials Science Department. She will attend Yale University or Princeton University and plans to study chemistry.

12. Janna Shaftan, a resident of Miller Place and daughter of Timur Shaftan of the Photon Sciences Directorate, is a senior at Miller Place High School. She will attend Northeastern University and plans to study physics and chemical engineering for a career in engineering.

13. David Wu, whose father is Lijun Wu of the Condensed Matter Physics and Materials Science Department, lives in Port Jefferson Station and will graduate from Comsewogue High School. He will study computer science at Dartmouth College.

14. Jonathan Yin, who lives in South Setauket, is a senior at Ward Melville High School and the son of Zhijian Yin of the Photon Sciences Directorate. He will study economics and mathematics at Williams College.

15. Scott Zhang, son of Yian-biao Zhang in the Biology Department, lives in Middle Island and is a senior at Longwood Senior High School. He will attend the University of North Carolina at Chapel Hill.