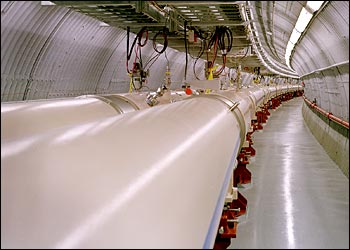 Nuclear physicists explore the basic, subatomic building blocks of all visible matter in the universe, revealing fundamental laws of nature and often revolutionizing both science and technology. The National Research Council, the principal operating agency of the National Academy of Sciences and the National Academy of Engineering, released on June 26 its fourth decadal report on nuclear physics: “Exploring the Heart of Matter.” The report outlines the significant advances of the past 10 years and offers critical recommendations for a competitive, trailblazing future.

Brookhaven National Laboratory operates at the forefront of nuclear physics research in the United States, in large part because of the Relativistic Heavy Ion Collider (RHIC), a 2.4-mile atom-smashing tunnel that recreates the conditions of the early universe. The report notes RHIC’s groundbreaking discovery of the primordial quark-gluon plasma (QGP), a super-hot “perfect” liquid that only existed moments after the Big Bang.

The council recommends the continued development of research projects throughout the country, including rare isotope production facilities, supercomputing infrastructure, and competitions to encourage the next generation of scientists. RHIC is mentioned as a candidate for an electron-ion collider, which would take “snapshots” of fundamental particles traveling at nearly the speed of light to reveal the forces of nature behind the Big Bang. The report also notes the ongoing work at Brookhaven Lab to develop the next generation of accelerators for precise, safe cancer therapy.

“We are especially encouraged to see the leading conclusion of the report state clearly that ‘exploiting strategic investments should be an essential component of the U.S. nuclear science program in the coming decade,’” said physicist Steven Vigdor, head of Brookhaven’s nuclear and particle physics program. “The recently completed upgrade of RHIC luminosities is one of two such investments explicitly called out in the preamble to that conclusion. The nuclear physics community still has a daunting task ahead to steer a course toward the recommendations of this decadal survey within the very tight budget guidance it has received from the administration and Congress.”

The decadal report video below looks at the exciting field of nuclear physics and features two RHIC physicists, Brookhaven Lab’s Paul Sorensen and Stony Brook University’s Barbara Jacak, who discuss the forces underlying all visible matter, the thrill of solving fundamental mysteries, and RHIC’s remarkable role in the hunt for knowledge.