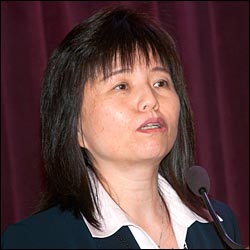 It was fitting that the banquet for this year’s NSLS/CFN Joint Users’ Meeting, which took place May 21-23, was held in the future lobby of the NSLS-II ring building. The meeting’s theme was “Expanding the Toolbox for 21st Century Science” and the new light source will be one of the most advanced, most powerful research tools in the world. But, of course, there were plenty of current topics to discuss, with National Synchrotron Light Source as productive as ever – and headed into another two excellent years – and the Center for Functional Nanomaterials steadily growing.

The meeting, attended by more than 400, was generally upbeat, as always. But mixed with the excitement of NSLS-II coming on line were concerns over tough budgets ahead and the looming closure of NSLS at the end of fiscal year 2014. With two years to go until the light goes out at NSLS, meeting organizers put together a forum to discuss the transition, likely to be the first of many such events. (See a summary of the forum below.)

Associate Director of Science for Basic Energy Sciences (BES) Harriet Kung, part of the U.S. Department of Energy’s Office of Science, did not dance around the serious issues during her talk Monday morning. She frankly discussed the priorities of BES in light of budget cuts and stressed the importance of advertising and promoting BES-sponsored research. Although NSLS-II remains fully supported, she said, the budget as a whole is not sustainable and BES core research programs will suffer a “substantial” hit, although some programs in materials and chemical sciences will see increased funding. 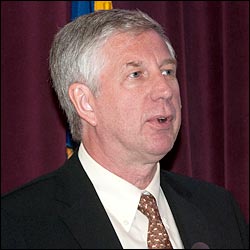 Kung also discussed the DOE Energy Innovation Research Hubs, research centers established to help solve critical energy-related issues. The hubs have become important part of BES and are examples of the kinds of projects they are eager to fund.

During his NSLS/NSLS-II update, Brookhaven’s Associate Laboratory Director for Photon Sciences and NSLS-II Project Director Steve Dierker told the crowd that NSLS will soon begin operating in “bare bones mode” as the transition begins to NSLS-II. There are now eight project beamlines in the works, he said, with a total of 21 beamlines being designed. Within a few years of the start of operations, NSLS-II will have 30 beamlines. This is a large number in a relatively short period of time.

CFN Director Emilio Mendez summarized many of the positive developments at his facility, which has grown in users and research capabilities since 2007. He described how the CFN will be linked to NSLS-II, partnering on two beamlines. 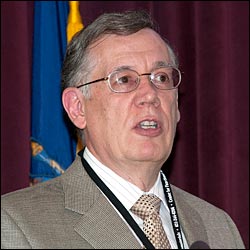 Attendees were also treated to a very interesting talk by the meeting's keynote speaker, Gina Kolata, senior writer for science and medicine at the New York Times. She discussed recent advances in early onset Alzheimer's research, which she writes about in an ongoing NY Times series. Her talk included some moving stories she has gathered during her research.

At the banquet Tuesday evening, everyone donned cowboy hats and dug into a BBQ dinner. After entertainment by a local Irish dance troupe from the Inishfree School of Irish Dancing, others took to the dance floor. First up was Photon Sciences Users Executive Committee Chair Dan Fischer, who took the opportunity to twirl around his fiancée Trudy.

Throughout the meeting, scientific workshops were spread across the Brookhaven campus. They included “Applications of Synchrotron Techniques in Plant Biology,” organized by Tony Lanzirotti from the University of Chicago and Tracy Pushon of Dartmouth College. The day-long session began with a talk by Catherine Ronning, DOE Office of Biological and Environmental Research, who gave a concise overview of the BER programs relevant to plant biology.

Ryan Tappero of Brookhaven’s Photon Sciences Directorate delivered a presentation on metal homeostasis in hyperaccumlator plants with the NSLS x-ray fluorescence microprobe. The talk elicited animated discussion about his research on nickel in Alyssum murale, a flowering plant.

“The x-ray fluorescence microprobe techniques available at synchrotron light sources provide an opportunity to look at elemental abundance and distribution for samples in a natural state, even live plants,” said Tappero. “With a tunable x-ray probe, you can determine the chemical form, or 'molecular speciation,' of the elements in plant tissue. You need to know chemically what's going on to get at the mechanisms. That's a real advantage over conventional particle and electron probes.”

While Tappero is focused on phytoremediation, others are using these x-ray techniques to explore bio-fuel production on marginal lands and biofortification of nutrient foods.

It was an intensive, three-day workshop at the CFN, where attendees heard several talks on how other users have applied the techniques to their research and had the opportunity to perform hands-on experiments at five state-of-the-art transmission electron microscopes and scanning electron microscopes. The workshop was organized by the CFN’s Fernando Camino and Dong Su.

The other workshops were: 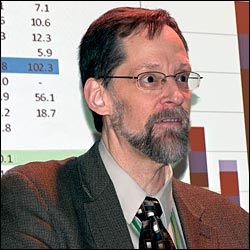 So said Photon Sciences Deputy Associate Laboratory Director for Programs Erik Johnson during a brief introduction to the forum. His words underlined the immediacy of the situation and set the tone for the user community’s first round of brainstorming on how they might navigate a significant period of time of diminished (or even no) beamline capacity for their research at Brookhaven Lab. The forum was just a small, first step, yet a clear message to users emerged: now is the time to begin planning.

The format was loose, with a panel of invited guests from other synchrotrons fielding questions that often sparked lengthy discussions. The panel members were: Piero Pianetta, deputy director of the Stanford Synchrotron Radiation Lightsource; Dennis Mills, deputy director of the Advanced Photon Source (APS); and, participating by phone, Zahid Hussein, division deputy for scientific support and scientific support group leader at the Advanced Light Source.

The input from other light sources is vital. Because NSLS users make up nearly one quarter of the DOE synchrotron user community, its absence will stress the entire system, increasing competition for beam time and cutting out some users altogether until NSLS-II is more fully built out. Many facilities are already oversubscribed, at least on certain beamlines. Nationally, the changes during the transition from NSLS to NSLS-II will result in a 15-20 percent reduction in available beamlines. The situation could potentially be exacerbated during the upcoming APS upgrade without careful coordination among the facilities.

Topics discussed included getting beam time at other facilities, remote data collection, moving NSLS endstations to other facilities, and temporarily sending NSLS staff to synchrotrons that have underutilized beamlines due to inadequate staffing levels. Concerns were raised about the feasibility of regional users traveling to other synchrotrons and the danger of permanently losing users who are forced to drop or postpone their research. While students would likely have an edge in getting beam time, everyone seemed to agree that advisers should discourage students from becoming involved in projects that would be difficult to complete. 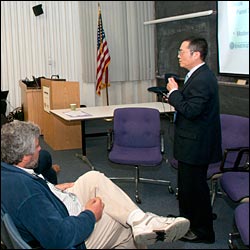 Tony Lanzirotti, a representative for the National User Facilities Organization, put up a spreadsheet of the techniques available at other synchrotrons in 2012, 2014, and 2016. He noted that there would be a national increase in availability by 2016 for certain synchrotron techniques. Many people asked for the document to be available online, perhaps alongside a tool for collecting input from users.

Peter Lee, the BES X-Ray and Neutron Scattering Facilities program manager, noted that the NSLS-to NSLS-II-transition is a first for DOE. He encouraged people to “think outside of the box” and consider developing collaborations as a way to cope with the challenges of the impending transition and the resulting diminished capacity across the DOE synchrotron community.

Photon Division Director Qun Shen laid out the plan for NSLS-II early operations. The first phase will focus on beam performance and will last possibly six months. It won’t be until late in 2014 that some beamlines will be ready for experiments. For example, a few “NxtGen” beamlines, those to be created using existing NSLS equipment, may be ready for users by December 2014.