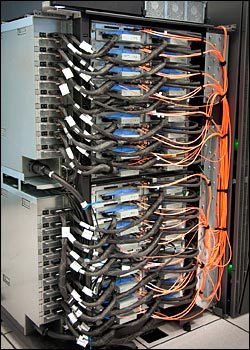 Cosmic-scale calculations and processing data as dense as matter itself have become essential tasks for advanced research in both the pure and applied sciences. Supercomputers, custom-built devices that eclipse consumer computers in both size and power, can dictate the caliber and efficiency of experiments that could lead to the next generation of renewable energy sources or help unravel some of the greatest mysteries in physics. And as scientific problems become more complex, supercomputers must rise to the challenge.

A supercomputer’s processing performance is often measured in flops, or floating operations per second. One such leading benchmark test determines rankings for the general Top 500 supercomputer list – currently topped by Lawrence Livermore National Laboratory's Sequoia, which also uses racks of Blue Gene/Q. But the Graph 500, backed by a committee of over 50 international high-performance computing experts from academia, industry, and national laboratories, is the first serious attempt to complement that list by specifically evaluating data-intensive processes.

The Graph 500 benchmark measures how quickly a graph can be set up and a computation can transverse that graph, and it involves very few floating-point operations. These types of graphing algorithms are essential in a variety of practical data intensive applications, including analyses in cyber security, bioinformatics, medicine, and social networks.

"The actual running of the Graph 500 benchmark test at Brookhaven was itself a challenge," McGuigan said. "Because Blue Gene/Q is so new and in some ways untested, many of the basic features of running code are still being worked out. Len Slatest of CSC and Fabrizio Petrini of IBM Watson were up to the task, however, and showed us all what a remarkable machine we have in the new Blue Gene/Q."

Brookhaven's Blue Gene/Q excels at critical data-intensive processes because of its world-leading energy efficiency. The supercomputer, designed and manufactured by IBM, sits on top of the Green 500 list as the world’s most energy efficient computer rated by flops per watt. Most of the energy consumed by computers is used to move data around between the internal processors and disks. Blue Gene/Q, however, features greater computer density, meaning that the operational cores within the machine are closer together and require less power to move data.

Each of Brookhaven's three Blue Gene/Q racks has 16,384 cores, or individual processing units that read and execute programs. These cores are linked by an advanced interconnect system that allows data to flow with limited bottlenecks when handling data intensive tasks.

Bottlenecks may be most familiar to drivers facing heavy backups when multi-lane highways abruptly merge into one – each vehicle must suddenly travel along a single, narrow pathway that was never designed to handle that kind of volume. The design of Blue Gene/Q overcomes this energy-wasting delay by effectively opening up multiple direct roadways, preventing traffic – or data – congestion.

"This is an exciting beginning, as the machine just opened for the Lab community to apply for computer time on Blue Gene/Q," McGuigan said. "Our scientists will soon demonstrate what the supercomputer can do for Brookhaven science as a whole in areas such as climate research, bioscience, materials science, and physics."