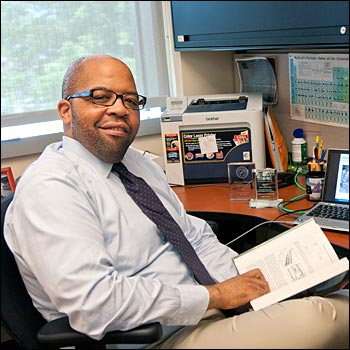 James Dickerson will serve as the new Assistant Director of the Center for Functional Nanomaterials (CFN) at the U.S. Department of Energy’s (DOE) Brookhaven National Laboratory.

Dickerson will oversee the CFN’s user program, which allows academic researchers and industrial laboratories to gain access to Brookhaven’s state-of-the-art nanotechnology facilities. The CFN is one of five Nanoscale Science Research Centers (NSRC) supported by the DOE, with research focusing on nanocatalysis, biological and soft nanomaterials, and electronic nanomaterials.

“I want to develop new partnerships among CFN and potential users from domestic and international academic, industrial, and governmental institutions in which the capabilities, expertise, and facilities of CFN can facilitate those users’ nanoscience research interests,” Dickerson said. “This is a fantastic opportunity to work with scientists at CFN and at other NSRCs in areas of national need.” Such partnerships could include research on graphene, semiconducting nanocrystalline materials, and rare earth nanoparticles, among other topics.

Dickerson comes to Brookhaven from Vanderbilt University, where he served as an associate professor in the Department of Physics and Astronomy and the Department of Chemistry. At Vanderbilt, he led a research team that investigated the synthesis and magnetic properties of rare earth-based nanocrystals. His team also studied electrophoretic deposition, an industrial technique that casts small colloidal particles onto targeted surfaces using electric fields. This method allows scientists to exploit the unusual properties of nanomaterials in the assembly of nanostructured materials, films, and coatings that do not exist in nature.

“From a physics perspective, a number of nanoscale systems show great promise to revolutionize many areas of society,” Dickerson said. Materials created through electrophoretic deposition can be used to produce a variety of technologies, such as supercapacitors and solar cells, in a faster, scalable, and less expensive way. Dickerson is currently organizing a group at Brookhaven to continue researching this method and its applications.

Dickerson studied physics as an undergraduate at Amherst College, and earned his M.S. and Ph.D. at Stony Brook University in 1999 and 2002. He studied organic molecular conductors and spectroscopic ellipsometry as a postdoctoral research fellow under Irving P. Herman at Columbia University. He is the recipient of a National Science Foundation CAREER Award and has served as the chair of the American Physical Society’s Committee on Minorities.