Five thousand miles from the Relativistic Heavy Ion Collider (RHIC) at Brookhaven Lab and 3,000 from the Large Hadron Collider (LHC) at CERN in Europe, 49 students from Africa and one from Iran gathered in the nation of Ghana to talk physics at the 2012 African School of Fundamental Physics and its Applications. There, 32 scientists from around the world introduced the students to the theories, experiments, and technologies that power major physics collaborations like those at RHIC and the LHC, where scientists are exploring the universe’s tiniest building blocks of matter. 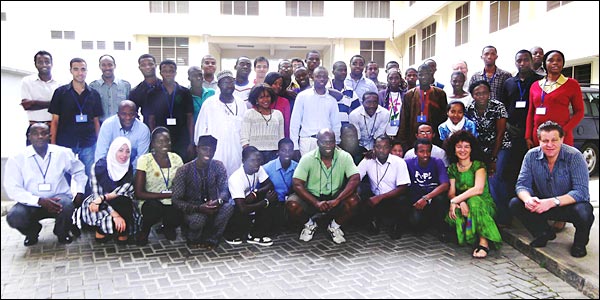 Participants in the 2012 African School of Fundamental Physics and its Applications. Brookhaven Lab physicist and organizing committee member Ketevi Assamagan is in the middle row, left. Brookhaven was among 23 institutions from the United States, Europe, and Africa that supported the school.

Fifty undergraduate, graduate, and Ph.D. students were selected from 132 applicants to attend this three-and-a-half-week-long program, where students participated in lectures and interactive exercises to learn the basics of theoretical and experimental subatomic physics, particle accelerators, medical applications of nuclear and particle physics, and cyber infrastructure. This second biennial event was held from July 15 to August 8 at Kwame Nkrumah University of Science and Technology in Ghana, about 125 miles from Africa’s Atlantic coastline.

Brookhaven Lab was among 23 institutions from the United States, Europe, and Africa that supported the school by helping to pay for the program and for the students to attend. 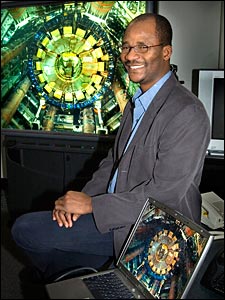 “We have noticed that participation of African scientists is very low for physics experiments and programs at major labs around the world,” said organizing committee member and Brookhaven Lab physicist Ketevi Assamagan during a recent Skype interview from a collaborator’s office at the University of Johannesburg in South Africa. “This program gives these students the opportunity to meet each other and network with members of the international physics community, so they can be inspired, well informed, and well connected to succeed wherever they go.

“We also show the students that the mathematical and scientific principles we teach are applicable for medical applications of nuclear physics, computing, and even finance,” Assamagan added. “Based on the feedback we’ve received from the participants, this year’s school was a great success.”

Assamagan himself was born in the African country of Gabon and raised in Togo, which is about 700 miles northwest as the crow flies. He earned a Ph.D. in nuclear and particle physics and is a physicist at Brookhaven Lab and member of the U.S. ATLAS collaboration at the LHC. In the hunt for the Higgs Boson, the possibly discovered particle from the Standard Model of Physics — the theory that identifies all known subatomic particles and explains how they interact — Assamagan has worked with the ATLAS Detector’s muon spectrometer to measure paths and momenta of charged particles called muons that emerge from collisions and are about 200 times heavier than electrons. He also works with ATLAS analysis software, led the ATLAS Higgs Physics Working Group for two years, and is currently involved in various analyses in search of possible new physics discoveries. 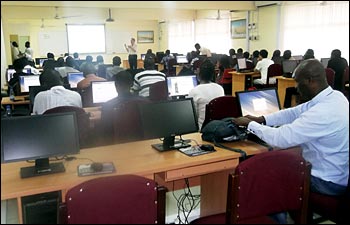 Jan Govaerts from Universite catholique de Louvain in Belgium talks to students from Africa about the theoretical foundations of nuclear and particle physics during the 2012 African School of Fundamental Physics and its Applications.

“The African School of Fundamental Physics and its Applications is possible because our sponsors, including Brookhaven, are very supportive of capacity building, from promoting scientific literacy to helping develop the next generation of scientists who will work to answer serious scientific questions,” said Assamagan, noting that Brookhaven’s Nuclear and Particle Physics Directorate and the Diversity Office were particularly supportive of this year’s school.

It’s a bit early to plan for the next school, scheduled for 2014, but Assamagan and his four fellow members of the international organizing committee will begin making preparations later this year. In the meantime, they are staying in touch with nearly all 115 students who have completed the program — 50 in 2012 and 65 in 2010 — sending the students updates about opportunities such as internships and scholarships. Participants stay connected via Facebook too.

“We may be separated by thousands of miles, but our questions about what the universe is made of are unanswered — and this a great time in history to collaborate!” Assamagan said.

Watch a video about the 2012 African School of Fundamental Physics and its Applications online.