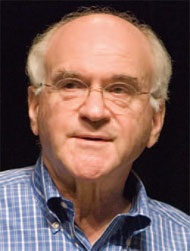 On Monday, September 24, at 11 a.m., the Lab community is invited to attend a talk by Victor Reis, senior advisor, DOE Office of the Under Secretary for Science, on “Sputnik, Climate, Fukushima and Small Modular Reactors: Innovation and Planning to ‘Change the Game.’” The talk will be held at 11 a.m. in the Chemistry Department’s Hamilton Seminar Room, Bldg. 555.

The speaker will also be present at the Brookhaven Center from 5:15 to 6:15 p.m. for further discussions, at an event hosted by the Long Island American Nuclear Society (LIANS).

In planning his talk, Reis noted that Secretary Chu and President Obama have suggested the United States’ Sputnik-to-Apollo program as a model for innovation and developing clean energy in the United States. Reis will use that model to analyze several presidentially driven programs such as Stockpile Stewardship and the Global Nuclear Energy Partnership, and indicate how the model might be applied to small nuclear modular reactors in the aftermath of Fukushima.

Victor Reis earned a B.M.E. from the Rensselaer Polytechnic Institute, and an M.Eng. from Yale University, both in mechanical engineering; and an M.A. and Ph.D. from Princeton University. Currently, he is working on various DOE issues, mostly involving small modular nuclear reactors. He is a member of the Strategic Advisory Group of the U.S. Strategic Command. Since 2005, when he rejoined DOE after some time in industry, he has helped formulate the Global Nuclear Energy Partnership.

Reis’s contributions include leading the development of DOE’s Stockpile Stewardship Program when he was Assistant Secretary for Defense Programs. His past government appointments include serving as director of Defense Research and Engineering in the Defense Department; director of the Defense Advanced Research Projects Agency, and Assistant Director for National Security and Space, Office of Science and Technology Policy, Executive Office of the President.

Reis was Senior Vice President for Strategic Planning at the Science Applications International Corporation and senior staff member at the Massachusetts Institute of Technology’s Lincoln Laboratory, and has held other industrial research and management positions. He has chaired and served on numerous government and laboratory advisory committees for the Department of Defense (DOD), NASA, the U.S. Navy, and Los Alamos, Sandia, Argonne and Idaho National Labs, among others. He has authored numerous scientific and policy publications, and his awards include two DOD Distinguished Public Service Medals, the DOE James R. Schlesinger Award, and an Honorary medal from the French Atomic Energy Commission.