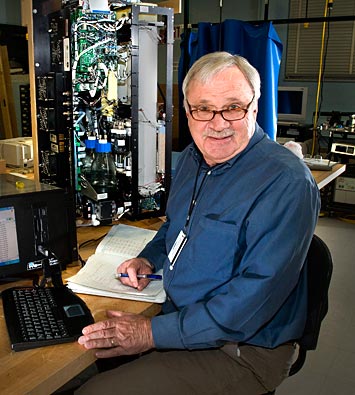 Peter Daum was named senior scientist emeritus upon retiring on January 18. During his 32 years at Brookhaven Lab, Daum researched how energy-related pollutants affect the atmosphere, and issues such as smog and acid rain.

On the basis of his long and distinguished career at the Laboratory, former chair of the Department of Environmental Sciences Peter Daum was named senior scientist emeritus upon his retirement on January 18, 2013. Daum joined Brookhaven as a chemist on June 16, 1980. He was appointed head of the Atmospheric Science Division in 2000, senior scientist in 2006 and chair of the Environmental Sciences Department in 2008.

In writing to congratulate Daum and thank him for his contributions, then-Lab Director Sam Aronson noted, "You have made lasting, impactful, and substantial contributions to the Laboratory and the Department of Energy (DOE). Your work has focused on the effects of the emission of energy-related pollutants on the atmosphere. The principal issues were photochemical air pollution (smog), "acid rain," and aerosol climate effects, the latter emphasizing the effects of aerosols on cloud properties, a topic at the forefront of efforts under way to improve the effectiveness of climate models.

"You sustained high scientific productivity through your career with over 110 papers in the peer-reviewed scientific literature, numerous presentations at universities, and meetings of scientific societies, and served on review panels for the National Oceanic and Atmospheric Administration, the National Science Foundation, and DOE.

"Your current service on two research advisory panels for the State of Texas, and on the Facilities Review Panel for the National Center for Atmospheric Research is much appreciated. As you leave the chair position of the Environmental Sciences Department, the department is well positioned to meet challenging scientific goals and to sustain a leading research program."

Said Daum, "It has been a privilege and a pleasure to have spent most of my professional career at Brookhaven, and to have had the opportunity to work with the dedicated staff at the laboratory. As a senior scientist emeritus, I plan to continue to work on the Department's climate programs and to contribute to the Laboratory in any way that I can."