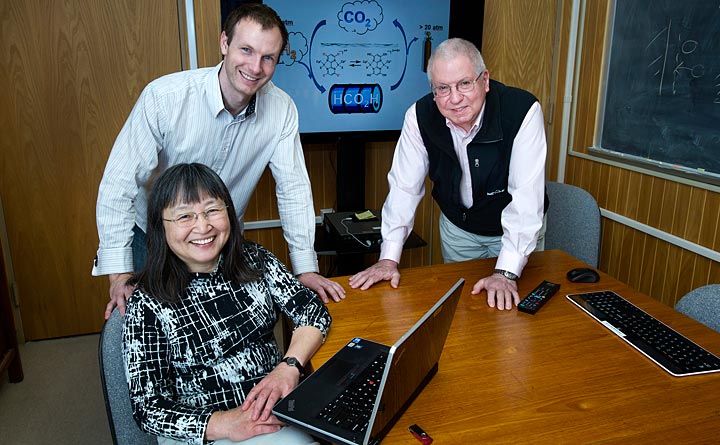 Garnering more than 11,800 unique page views since its publication in March 2012, a Nature Chemistry paper co-authored by Brookhaven chemists landed on the journal’s “Top 10 in 2012” list of most popular articles. Coming in at number seven, the paper was written by Brookhaven chemists Etsuko Fujita, James Muckerman, and Jonathan F. Hull in collaboration with Yuichiro Himeda and Wan-Hui Wang at the National Institute of Advanced Industrial Science and Technology in Japan, and presents their development of the first reversible and recyclable hydrogen storage system that operates under mild conditions. By creating a new catalyst capable of converting hydrogen gas and carbon dioxide to liquid formate at room temperature, this storage system could revolutionize the ways in which hydrogen is transferred and stored.

Given that more than 115 articles were published in Nature Chemistry in 2012, only eight of which received more than 10,000 views, this accolade is a resounding indication that the Brookhaven chemists’ innovative and cutting-edge research has struck a chord with the scientific community. More broadly, their research may enable more widespread use of hydrogen, long hoped to be a source of alternative fuel because of its natural abundance and lack of toxic byproducts when converted to energy.

“It was very gratifying to learn that our paper on reversible hydrogen storage was in the top 10 most viewed articles,” said Fujita. She and Muckerman are optimistic about further development. “There has been a lot of interest in this work, and we are continuing to pursue a more detailed mechanistic understanding in hope of designing an even better catalyst for this process,” Muckerman said. The two scientists have since published two more papers on mononuclear catalysts in Energy and Environmental Science and Chemistry – A European Journal, and have a third submitted for publication in 2013.

If this novel conversion process allows hydrogen to be safely transported as a liquid, it may become possible to use the same kind of infrastructure already in place to transport other liquid fuel sources like gasoline and oil. This would be a major step toward decreasing reliance on those hydrocarbon fuels.