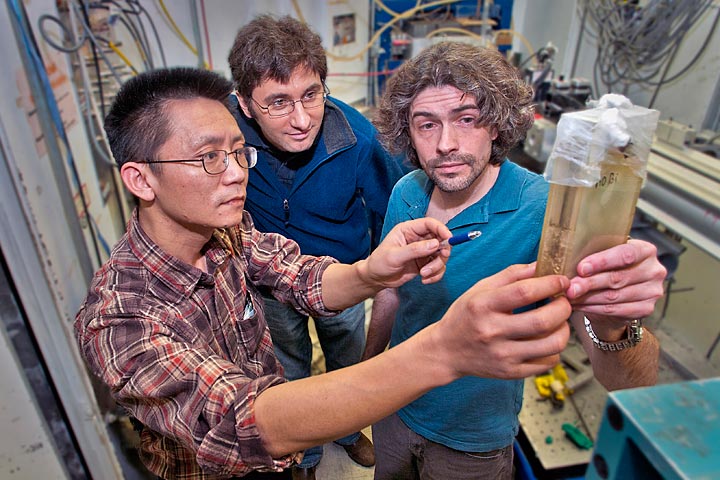 The shrinking size and increasing capacity of batteries in the past few decades has made possible devices that have transformed everyday life. But small isn't the only frontier for battery technology. As the world enters its most energy-intensive era, the search is on for bigger, cheaper and safer batteries that can capture, store, and efficiently use sustainable energy on a large scale.

To determine how best to meet those large-scale energy needs, researchers from the City University of New York (CUNY) Energy Institute at City College are probing small-scale, off-the-shelf D-cell batteries — like those you might use in a flashlight. These alkaline batteries are inexpensive and energy dense, properties that could potentially be scaled up to provide safer and cheaper grid-scale power.

The researchers are using the National Synchrotron Light Source (NSLS) at the U.S. Department of Energy's Brookhaven National Laboratory to test the limits of alkaline batteries. Though typically considered "single use," these alkaline batteries may have longer lifespans than previously thought before ending up tossed in the recycling bin. Finding out how many actual uses we can squeeze out of these off-the-shelf batteries, along with tests of model alkaline batteries that mimic grid-scale construction methods, could feed a new revolution in inexpensive and readily available power sources that could run buildings.

It turns out that primary batteries – those sold for one-time use – will actually recharge if only a fraction of the capacity is used. In other words, these batteries are only irreversibly used up if every last electron is pulled out of them. The team is beaming high-intensity x-rays generated at the NSLS through a battery as it operates to determine just how far we can push these cheap power sources and how much of a battery's energy can be tapped while retaining the possibility for multiple uses.

"We're pinning down what that fraction is and how fast you can use up that capacity and still maintain the ability to recharge," said Joshua Gallaway, senior research associate at the CUNY Energy Institute.

There are several advantages to scaling up alkaline batteries instead of focusing on, say, the rechargeable lithium-ion batteries used in laptops and other electronics. "Alkaline batteries are safe and inexpensive. That's really at the heart of the matter," Gallaway said. "As long as you neutralized the electrolyte, you could eat everything in our battery."

The primary ingredients in these low-cost batteries, manganese and zinc, are both abundant and well distributed around the world, which is a major consideration in the pursuit of energy security for the United States.  Lithium-ion batteries normally require more expensive, less readily available materials.

"You could say that the massive portable computer revolution happened because batteries got smaller and smaller. Batteries are the limiting factor," Gallaway said. This research is attempting to expand those limits by pushing in the other direction, making batteries larger, safely. Getting there would solve two big issues in energy storage for the electric grid.

One is load leveling, which aims to make electricity production more efficient by maintaining the same level of production at all times, as opposed to current practices at traditional power plants, which experience fluctuations as they follow electricity demand. The other is known as renewables firming, which pairs energy storage with some form of renewable generation, which is intermittent in nature. For example, wind power is generated mostly at night, while solar power is generated mostly during the day. Finding a way to store energy produced by these methods would allow it to be used anytime, not just at the moment of generation.

"Electricity is a product that needs a warehouse," said Brookhaven Associate Materials Scientist Can Erdonmez, a collaborator on the research. "We need a way to efficiently and safely store large amounts of energy and we need to find the limits of our batteries in terms of storage capacity and lifetime."

At NSLS, the scientists monitor changes in zinc and manganese dioxide – ingredients of standard consumer alkaline batteries – during charge and discharge.

"Charging and discharging a battery is like pumping water up a mountain and having it stream back to the bottom," he said. "You have to force water up a hill ("charging"), but on the way down, it falls freely."

As batteries charge and discharge, the chemicals that fuel their internal reactions degrade and stop supplying electrons. To get a glimpse inside the changing nature of the core of a charging battery —so as to better understand how this degradation occurs — the team is employing energy dispersive x-ray diffraction at the X17B1 beamline of NSLS.

"NSLS produces x-rays with high enough energy that they can go directly through the batteries and out the other side while they're charging and discharging," Erdonmez said.

Gallaway and Erdonmez are working with Professor Dan Steingart of Princeton to test cycleable grid-scale alkaline batteries made at the CUNY Energy Institute headed by Distinguished Professor of Chemical Engineering Sanjoy Banerjee. This collaboration was initiated through Brookhaven under the Laboratory Directed Research and Development program with the purpose of combining the advanced characterization expertise at Brookhaven with vigorous development activities on grid-appropriate battery technologies in several academic institutions in the Northeast.

"We have parallel work going on at other NSLS beamlines where we test paper-thin model devices," Erdonmez said. "Those experiments are great for understanding the ultimate limits of the materials, but do not show the full range of behaviors possible in the relatively large volumes inside industrially produced batteries."

The structure of a battery changes as it degrades, but this doesn't happen uniformly. Quantifying these irregularities will help researchers understand how to make larger batteries last longer.

"X17B1 is really unique," he said. "The data we're taking helps us think and design for real-life systems because we can see how these materials behave in a battery pushed to its limits."