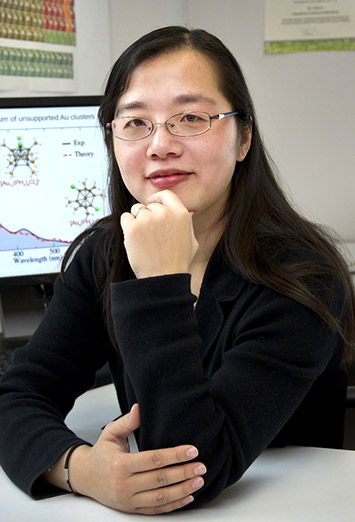 Yan Li is a Computational Physicist at the Computational Science Center at Brookhaven National Laboratory. Her work is mainly focused on developing and applying advanced computational tools to investigate material properties of crystal, surfaces/interfaces and nanostructures. Yan got her Ph.D in Physics from University of Illinois at Urbana-Champaign. Before becoming a staff scientist at BNL, Yan worked at the University of California, Davis as a postodoral researcher. Yan holds a Bachelors of Science in Physics from Peking University in China.

Interestingly, the two people who got me inspired to enter the STEM field are both men. One is my brother who was six years ahead of me in school, with a BS in physics and Ph.D in Materials Science. As many young girls, I always aspired to do what he had achieved and believed that I could—-and I think I did. Another person is my high school physics teacher. He was always enthusiastic about physics and was eager to pass on the knowledge to the students, which he did in a very intuitive and effective way. Encouraged and influenced by this great teacher, I chose physics as my major in college, which later turned into the subject of my career.

Working at a DOE lab allows one to access not only the cutting edge facilities and resources, both experimental and computational, but also a large community of outstanding  scientists who share the same aspiration for scientific discoveries. I am currently collaborating with researchers from three different departments at BNL, and each of these exciting projects are being carried out by a talented team of scientists.

Equally important to bringing in more women and underrepresented groups into STEM, we need to provide more support for those who are already in. One female graduate student told me that she was shocked to learn how adverse the academic environment is for STEM women in general, when she went to a symposium and heard these "horrible" stories from the female  speakers who either have to postpone or give up having a family until tenure or have to try twice as hard as their male colleagues to advance in their career.  Imagine how discouraging it would be for students who are thinking about continuing their study or career in STEM, not because these things are being brought up in a public symposium but because they actually have happened and are still happening around us, although not everywhere.  Having just a handful examples of female scientist who can "have it all" is simply not enough to encourage women and other underrepresented groups in STEM.  The whole culture and environment need to be changed to be more supportive and flexible to accommodate the needs of these community, so that they can all be their best without having to make unnecessary sacrifice or bent to unfair "game rules".

What we can learn from books,  science magazines, and conversations with scientists can not replace how we would actually experience as a researcher in that particular field. Try to find an opportunity to spend several hours, days or weeks working in a lab or a group in that particular field and get the first-hand experience. It can be as extensive as a summer internship or can be as simple as an one-day  "visit of the lab"  activity. It is important to have a reasonable idea and expectation of the field by observing it at close distance or by getting oneself directly involved.

I love playing badminton and I was still practicing when I was five months into pregnancy with my baby girl, who seems to have inherited the sports gene. Such exercise not only refreshes my body and mind, but also helps to build great friendship and teamwork.