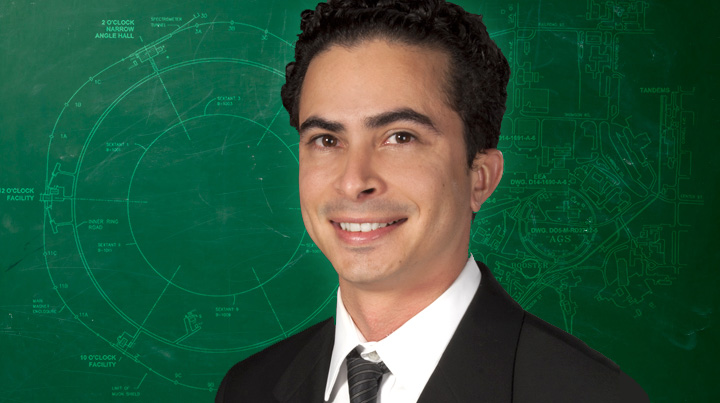 As a member of the STAR collaboration at the Relativistic Heavy Ion Collider (RHIC), Johan Gonzalez became a master juggler—of large data sets, that is. While a graduate student in physics at the University of California, Los Angeles, he developed scripting techniques for sorting and making sense of the vast amounts of data generated by collisions of particles in subatomic smashups that recreate the conditions of the early universe. Now, with Ph.D. in hand, he applies his data-juggling expertise and knowledge of distributed computer systems to design algorithms for analyzing data from radar sensors here on Earth—the kind the military use to keep us safe from more threatening "smashups."

"After I completed my Ph.D. in 2006, I got a job at Raytheon Company, a large defense contractor in Los Angeles, California," Gonzalez said. "Most of what I do involves algorithm development and analysis of radar sensor data. The algorithms that I work on essentially help get the most out of existing radar sensor hardware.  I have one patent under my belt and have four more in the U.S. Patent Office pending approval."

He says the work at RHIC prepared him well, and not just for crunching the numbers.

"I learned to apply statistical techniques that I currently use in the analysis of sensor data, but some of the most valuable lessons I learned were the 'soft' skills of communicating and presenting results. By working in a large endeavor like STAR, which is comprised of hundreds of scientists and engineers, I also learned to work effectively as part of a team.

"All of these experiences have come in handy in my years of working in the private sector. But most importantly, in the STAR collaboration I was taught how to make effective use of the 'knack' that comes with being a physicist—the ability to tackle any quantifiable problem, regardless of the specific discipline."