Novel method gives scientists ability to peer inside batteries, fuel cells, and other devices as they operate to gain insight that could improve performance

Nanomaterials made of particles with dimensions measured in billionths of a meter hold enormous promise for creating more efficient batteries, fuel cells, catalysts, and drug-delivery systems. Seeing how the nanostructured materials inside these devices evolve and interact as they operate is essential to gain insight into ways to optimize performance. But most studies have looked at idealized samples of isolated components, not as they function in operating devices. 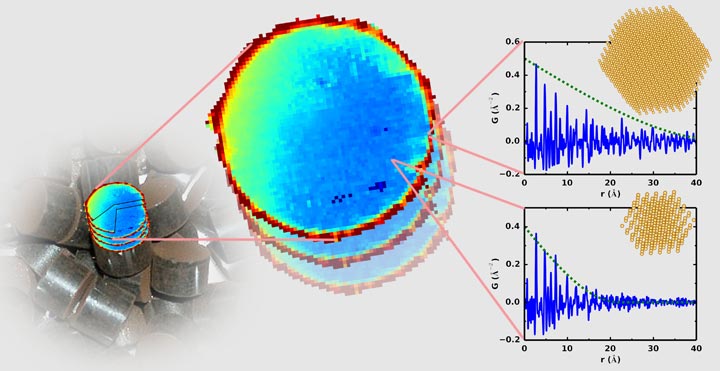 Peering inside a catalyst: A new dual-method imaging technique allowed scientists to map the internal nanostructure of these cylindrical catalyst bodies non-destructively. The technique combines computed tomography (CT)—which makes "slices" of the 3-D structure (circles)—with x-ray particle distribution functions (PDFs, shown as graphs), to plot information about the internal nanostructure and chemistry (colors), pixel-by-pixel in three dimensions. The PDFs for the two pixels shown indicate that there are large palladium nanoparticles at the edge of catalyst body, and small palladium nanoparticles in the center (represented as different-sized clusters). The powerful method reveals the structure at many length scales—from the millimeter-scale catalyst body, to the micron-scale arrangements of the nanoparticles, to the billionths-of-a-meter nanoparticles, all the way down to the atoms themselves.

Now a group of researchers at the U.S. Department of Energy’s Brookhaven National Laboratory and Columbia University’s School of Engineering and Applied Science has developed a new kind of “x-ray vision”—a way to peer inside real-world devices to map the internal nanostructures and properties of the various components, and even monitor how properties evolve as the devices operate. The novel dual imaging method described in Nature Communications, September 30, 2013, combines high-intensity x-rays for discerning nanoscale structures with cross-sectional “slices” of the device to pinpoint the precise location of the nanostructured components. It opens new opportunities for advances in a wide range of research disciplines from materials science to biomaterials, geology, environmental science, and health.

“If you think of a battery with an anode, next to a membrane, next to a solid electrolyte, next to another membrane, next to the cathode, and all this wrapped in a steel container, it’s pretty opaque from the outside,” said Simon Billinge, one of the paper’s lead authors and a researcher at both Brookhaven and Columbia Engineering. “What we can do now, with this new dual-imaging method, is look inside the battery and extract the nanostructure from each of those parts of the battery separately, and we can do it without taking the battery apart, and we can also do it while the battery is operating, to follow the chemistry as the materials evolve.”

The x-rays used for this technique are not like the ones used to image a broken bone. They are exquisitely intense, small beams with very high energy produced by a synchrotron light source, a precision scientific instrument located at select research centers around the world, including Brookhaven Lab and the European Synchrotron Radiation Facility in Grenoble, France, where this particular study was done. The x-rays generate measurements of the distribution of distances between pairs of atoms in the material—known as atomic pair distribution functions, or PDFs—which reveal the nanoscale structure.

Larger scale cross-sectional images of slices of the material taken from multiple angles using computed tomography (CT)—just like what doctors use to check for brain injuries after a bad fall—give scientists the spatial information they need to make a 3-D map of the device’s material components and “place” the information about nanoscale structure on that map.

“Each method is powerful in its own right, but together they give us a whole new kind of picture,” Billinge said. “For the first time we can separate the nanostructure signals from the different parts of a working device and see what the atoms are doing in each place, without dismantling the object.”

Like the imaging methods that have had a huge impact in health care and the physiological and neurological sciences, this technique offers unprecedented access to the internal workings of materials at the nanoscale.

“It is like being able to see what is happening, and making measurements, inside any room deep in the center of the Empire State Building but looking at it from the observation deck of 30 Rockefeller Center—oh, and if the Empire State and Rockefeller buildings were really tiny,” Billinge said.

To demonstrate the technique, the scientists made images of a complex phantom sample composed of a mixture of multiple amorphous and semi-crystalline materials. They were able to tell these distinct phases apart with ease.

Then they used the method to study the internal structure of a catalyst made of palladium nanoparticles on an aluminium oxide support that is widely used in the chemical industry.

“The efficiency of many industrial processes is dependent on the performance of catalysts deposited onto a structural support known as a catalytic body, so it’s extremely pertinent to understand how they are prepared and operate in practice,” Billinge said.

The technique clearly revealed a non-uniform distribution of particles, with larger particles on the surface and smaller ones on the inside of the material.

“It is not clear from this study whether the significant catalytic activity would originate from the larger and more numerous particles located at the periphery, or by the smaller ones in the interior,” Billinge said. “But by using dynamic PDF-CT to monitor the catalyst as it performs, it is now possible to provide a more complete picture of the catalyst sample and the evolutionary processes by which it develops and operates to understand these relationships, and ultimately to guide improved catalyst design.”

This research was performed while Billinge was on sabbatical from Columbia and Brookhaven, but will likely continue at the National Synchrotron Light Source II (NSLS-II) at Brookhaven, when it becomes operational in 2015.

“With modern synchrotron light sources, sub-micron x-ray beams are becoming more widely available, allowing for the possibility of PDF-CT imaging with resolution on nanometer length-scales in the near future,” Billinge said.

This research was done in collaboration with scientists from the University of Manchester, UK; the Research Complex at Harwell, Didcot, Oxfordshire, UK; University College London; ESRF; and Utrecht University, The Netherlands. The work was funded by the U.S. Department of Energy’s Office of Science and by the UK Engineering and Physical Sciences Research Council.