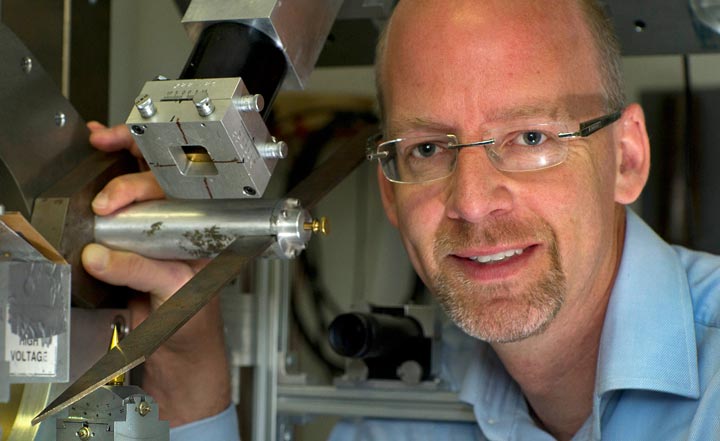 In his new role, Hill will report to ALD for BES Jim Misewich and will assist with all ALD functions across the directorate. He will also serve as acting ALD in Misewich’s absence. One specific focus for Hill, who previously held the positions of Special Assistant for Photon Sciences in BES and Experimental Facilities Division Director for the National Synchrotron Light Source II (NSLS-II) project, will be planning and advancing the directorate’s work towards high-impact experiments at NSLS-II, scheduled to begin first operations next year.

“John is a distinguished physicist who has made significant contributions to the field, particularly in the use of inelastic x-ray scattering as a powerful probe for condensed matter physics research,” said Misewich. “He’s already played a significant role in charting and developing our future research programs at NSLS-II, and I’m very excited about his continuing that work on our ‘first light’ experiments, which are of crucial importance to the Laboratory.”

Hill, who will also maintain his role as group leader of the x-ray scattering group in CMPMS, is recognized as a world leader in applying x-ray scattering techniques to the study of condensed matter systems. In particular, he has focused on using resonant elastic scattering to study magnetic and electronic order in a range of materials. More recently, he has extended these studies by pioneering the use of inelastic x-ray scattering techniques to study electron dynamics in similar systems. His research is presently focused on understanding the novel electronic ground states and excitations in strongly correlated electron systems.

“I am honored to be asked to serve Jim and BES in this role. It is an exciting and important time here at Brookhaven, with NSLS-II nearing completion,” said Hill. “I am looking forward to working with the strong teams within BES, Photon Sciences, and across the Lab, to ensure we take advantage of this wonderful new facility to carry out ground-breaking science over the next few years. NSLS-II represents a fantastic opportunity for BES here — and for the community in general — and I am excited to play a part in helping to realize that opportunity.”

After obtaining a B.Sc. degree in physics in 1986 from Imperial College, Hill earned a Ph.D. in physics from the Massachusetts Institute of Technology in 1992. From there, he joined Brookhaven Lab’s Physics Department as a postdoc. He was promoted through the ranks, received tenure in 1999, and was appointed group leader of the X-ray Scattering Group in 2001. Hill was awarded the Presidential Early Career Award and the DOE Young Independent Scientist Award in 1996, was elected a fellow of the APS in 2002, and received a Brookhaven Science and Technology Award in 2012.

Hill served on the NSLS Users Executive Committee from 1999 to 2001, and from 2001 to 2007, he was the Executive Director of IXS-CDT, a consortium that led the design, construction and commissioning of an inelastic x-ray scattering beamline at the Advanced Photon Source.

From February 2006 to August 2008, he served as Experimental Facilities Division Director for the NSLS-II project, with responsibility for overseeing all aspects of the design, construction and commissioning of NSLS-II’s experimental facilities, a scope of work that included beamlines, the associated R&D programs and interactions with users.